We did it. We told the kids that we are maybe probably most likely thinking about moving.

It went well! Much better than we were expecting, given that the last we broached the subject with Noah he freaked out and threatened to run away from home AND tie himself to the tree in our front yard AND get adopted by whoever bought our house AND ALSO not move, at all, ever, can't make me, so there.

He narrowed his eyes at me, "You guys are talking about moving again, aren't you?"

"Yes," I said, honestly, and braced myself.

But instead of arguing, he spent a few minutes thinking about it, and then announced that YES, moving to [POTENTIAL NEW NEIGHBORHOOD] was an excellent plan.

Ezra, as usual, was just like cool, whatever you guys wanna do, I'm down with that. I would like to put in a request for a pool and my own room and a zillion new friends. But you know, I'm flexible.

Ike just sort of sat there for awhile, staring into space, so I wasn't sure how much of the conversation he was following. Until I began walking the boys through all the pre-moving steps and what they should expect over the next couple months. Mom and Dad have a lot of projects to do, some stuff will get packed up and put away, there will be a sign in our yard, things will need to stay super clean, and then people will come visit and walk through our house, and...

"NO!" Ike suddenly shrieked. "NO PEOPLE IN MY HOUSE!"

Over the next couple days, though, it became pretty obvious that I'd left some MIGHTY BIG INFORMATION GAPS in my pre-moving pep talk. Like the fact that moving is not just strange people showing up and moving into your house and playing with all your toys and sleeping in your bed. Whoops. Probably should have separated out the talks and gone a little more basic with the 4 year old, brainiac.

Noah and Ezra officially cannot WAIT to move, which I'm sure means the actual move will end up being a crushing disappointment, like they think we're moving to a toy store or to a house with a built-in basement water park, or something. Ezra has already put all his favorite toys and babies in his backpack and Noah keeps asking when we're moving, like tomorrow? Next week? Please say next week, the waiting is killing me. You got me on board with this plan, so CHOP CHOP, PEOPLE. 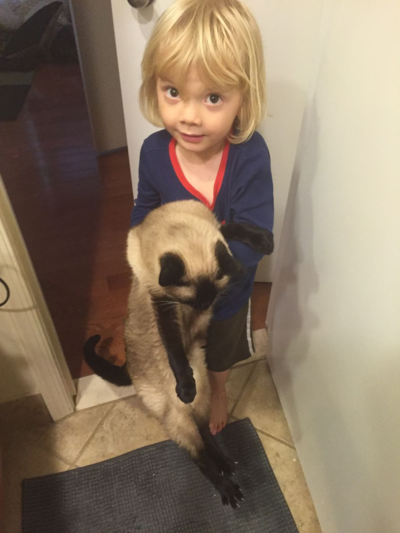 Yesterday he carried Max into my bathroom and asked, "Are we taking this cat?"

With each "yes," he is newly delighted. "We're taking this cat! Yayyyyy!"

We moved three years ago to a new county closer to family and friends. This neighboring county also happened to be a better school district just in time for my son to start kindergarten, win-win.

The whole process sucked involving three real estate transactions in the span of 2 months and my then 5 year old heard me repeatedly say we were never moving again.

After all was said and done and we were settled in the new house (love everything about our move btw, best decision ever) my son looked at me over breakfast and said "mommy, are we never moving again?" I looked at him and without missing a beat responded "You are, in about 13 years." :) Quality parenting right there.

Luckily my son is totally used to my dry candor and wasn't phased but I realized later that maybe that wasn't the best thing to say to a 5 year old. Whoops!

We moved to a whole new state two summers ago and then bought our new house a year ago. I'm still suffering from PTSD from the last move, but that mostly has to do with the fact that our movers didn't show up to move us until 7:30 PM. Get great movers is my only advice.

We moved just after Christmas (about a mile into a nearly identical house in the good school district) but it apparently traumatized my 3-year-old so much that when we went on vacation to Florida for spring break, she thought we'd moved again, and was miserable for 4 days until I finally figured it out.

Of course, we pulled the 1-2 punch of new house! New baby! On them, so I don't know why we thought it was going to be easy.

We moved in April, and it was a huge pain in the butt, but man, so worth it!
IDK where you guys are looking, and it seems like you already have your eye on somewhere, but Damascus schools are all 8's and 9's on GreatSchools!! Better even, than Clarksburg, where everybody seems to want to go right now.

What would have been even funnier is if that hadn't been your cat. "Are we taking this cat?" "...No."

In my head I'm picturing that scene from The Jerk with Steve Martin.

"The ashtray, the remote control, the paddle game, and this magazine, and the chair. And I don't need one other thing, except my dog."

That's super exciting! We're about to embark on a super expensive kitchen remodel because we love our house and our girls' schools, but the kitchen and its layout have a lot left to be desired.

Good luck finding the perfect house! And selling the existing one. Uggh.

And yet! I am moving next May. To an entirely new city. By myself.

It's probably better that they get used to moving now. My parents lived in the same house from when I was born till when I was 24 years old and it TRAUMATIZED me when they sold it. (And I was living on my own at that point!) I tend to get overly attached to inanimate objects though, so that might just me me...

Ike is age normal re worrying what does and does not move with him. My daughter at same age went to open homes with us and totally wanted houses based on what toys and fancy bedrooms she saw.
Hope you find the right new place easily and your current one sell super fast so everyone's dates collide correctly.

When we were selling we had one touring kid leave a note on my daughter's desk about how happy she was going to be to live in our house. Weird! Then that sale fell through when they couldn't sell their existing house, too. She felt bad for that kid.

My brother and sister-in-law are looking to buy in DC in the near future so I'm just imagining them buying your house for fun.

We've been talking about moving for months, house up for sale two weeks ago. Throughout this time, my 3 yo has been asking what's going with us when we move, like Ike. The other day she asked if the doors were going. I said no, but the new house would have doors there already. She's so excited for new doors. Kids are weird. :-)

(PS - will never move, do not have cojones to break it to the kids....so congrats on that as well - now can I borrow your cojones?)

You live in a desirable neighborhood. Your TH should sell quickly. From experience, do the kids a favor and find a place in the new town fast and close before 4th grade starts - even if you have a double mortgage for a month or two. It'll be so much harder to start a few weeks in the old school then switch over if you don't finish it all up in 2 months. It'll be hard but possible and so worth it.

we forgot to explain to the four year old that he was moving to. or somehow this escaped him.
he then had trouble sleeping and demanded to be hugged all through the night until finally he asked "where will i live when you and dad move?"
i felt like such a horrible parent. But he was just happy to know he was staying with us!

When we moved, for the last time according to hubby, I spent a week painting the trim, walls and ceilings in the new house. This earned me an extruded disc & sciatica. THAT earned me a 'free pass' with all other moving related work. Sciatica FTW!

We did a local (VA to MD) move two years ago. We hired Two Marines Moving both to pack and move. Worth every bleeping penny. We could keep the kitchen set up until the last second and focus on a thousand other tasks like sorting out things to donate and figuring what we were going to do to the house before we moved in (electrical, etc).

No connection to the company--just a long time reader with possibly useful information!

Max is like "Screw you guys. I want a separate moving truck and a food upgrade." LOL

Should be able to find at library. Very comforting book for kids . :)

We're not even thinking about moving, but we have talked to our girls about how this is most likely not our forever house (because eventually three teenage girls in 1600 square feet might actually be the thing that kills me). Thanks to that, just about every day I field some kind of moving question: "When we move, will we take this fork?"

I would really truly, with everything in me, like to move (to a house that needs to work but still has old timey charm like our current house). Also, I don't intend on selling this house, ever, so there needs to be some more money from somewhere for us to be able to have two houses. I really just want to move for some newness. I still like this house. We've outgrown it, but we have room to build on the back. That would solve so much. May your buying and selling and strangers walking through and moving be as easy as possible.