The Quiet Before the Summer Storm

And so the first (and last) week of ME & IKE & SUMMER VACATION comes to a close. We did pretty okay. We left the house for two different end-of-school year parties and Ike agreed to change out of his pajamas both times. A couple bumps and bruises but no ER visits or a significant amount of destruction.

Today, not so much on the pajama thing. But for the record, Ike did not ask to watch TV or play with a tablet/screen even ONCE this week, so we did not do either, at all. (Perhaps he finds Click the Camera as fucking annoying as I do?) He let me work. He amused himself. He asked for crayons, Play-Doh, books and the occasional help with a puzzle. 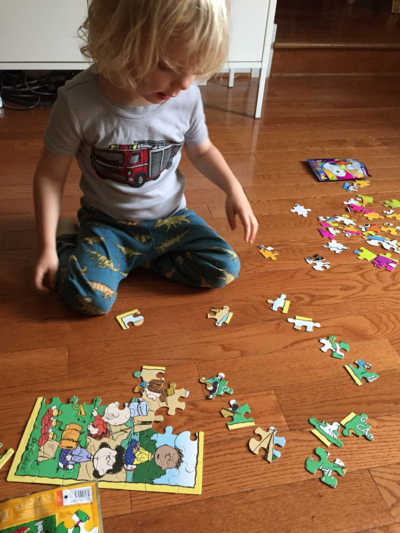 THIS KID AND PUZZLES, by the way. 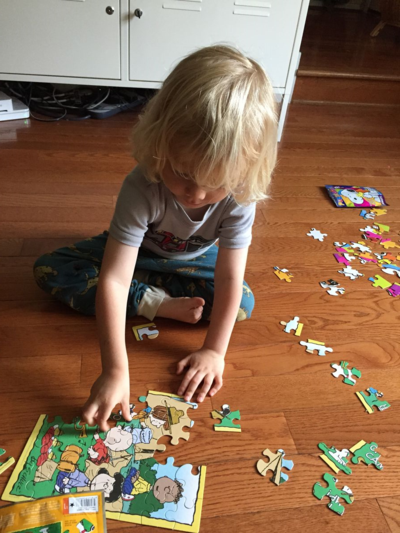 Who knew? I did not. Because I am a terrible parent who keeps all our "big kid" puzzles in a locked cabinet to prevent the boys just grabbing box after box and dumping them all over the floor. So poor Ike has never played with our puzzles until this week, when he found two (still sealed, never opened) Peanuts puzzles I got in the $1 section of Target as stocking stuffers for his brothers (who ignored them completely).

After watching him assemble these two puzzles approximately three dozen times, I realized that I should probably unlock the puzzle cabinet and offer him some new options. 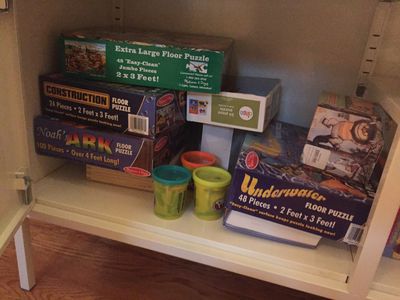 (HA HA I also got fed up and locked up some Play-Doh, once upon a time. It's probably fossilized at this point.)

Note, however, that all this wholesome peace, quiet and puzzles nonsense will come to an abrupt and screeching end at 12:35 p.m. on Monday, when summer vacation begins for Noah and Ezra and all the other neighborhood kids. Ike would have made a LOVELY only child, apparently, but starting next week we'll be firmly back in Wolf Pack Amped On Bath Salts mode.

My first child LOVED puzzles at that age. LOVED. My second came along, is now that age, and all of our puzzles have been chucked b/c of pieces everywhere. I still find pieces to puzzles I threw away years ago. This is the same reason I loathe memory games or really board games of any sort. I buy them, they lose all the pieces, I throw them all out and still find pieces for months. Then someone buys us a new game/puzzle and we start all over.
Also, we are a few counties south of you and we end at 12:35 on Thursday and I am dreading it. Not that they've done anything at school lately besides extra snacks!playground time!movies!free drawing! but still. He's doing it out of my house and not begging for TV and tablets.

Ike is a man after my own heart. I rarely wear anything but pajamas at home.

puzzle trick from my elem school teaching (pre-kid) days: draw the same symbol (i.e.: star, heart, triangle, whatever) on the back of all the pieces from a particular puzzle. Also draw that same symbol on the puzzle box somewhere. Then when you find a random green puzzle piece, you can just look at the symbol on the back to figure out which box it belongs in. This only works when they do little kid puzzles, unless you want to draw on 500 puzzle pieces. But for 100 and under, it's been a sanity saver!

Third kids, man. We forget shit, then remember shit, and then get to smile at how different they are from the others based on what we've forgotten, remembered, and tried again. Z LOVES puzzles, still. But he's behind your boys in love of LEGO; that just started, thanks to the table he never before imagined, at damn Port Discovery.