ALL THE WIRE HANGERS!

Wow. I am so frazzled right now I completely forgot to blogshame my amazing husband about this: 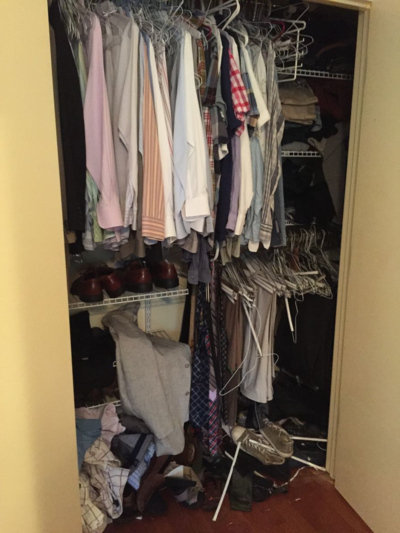 While he was away last week, I decided to be SuperNice SuperWife and organize his closet for him. Or maybe for me, and my sanity, because he kept saying he would do it but then wouldn't, even though I was CLEARLY staring at him hard enough to SET HIM ON FIRE.

I'd already tackled my closet and shelves, purging mercilessly along the way, in hopes that nosy prospective homebuyers would be wowed by my organizational skills and the illusion that OMG LOOK AT ALL THAT SPACE WE SHALL NEVER EVER OUTGROW ALL THAT SPACE HOORAY! 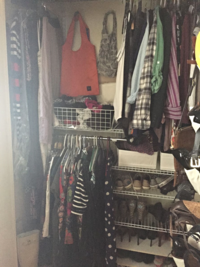 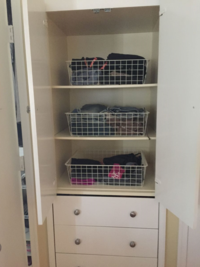 Suckers. Here's all the crap I pulled out: 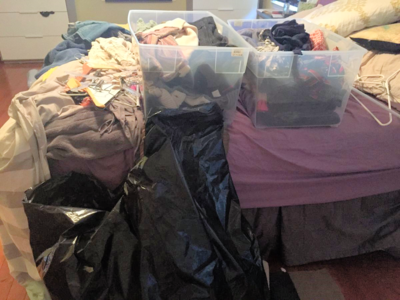 (Okay, so I know it's unwise to be publicly ragging on my house right before we attempt to sell it, but I feel like the closet thing is a trick we all do, we all know we all do it, and yet we all fall for it, every time. The previous homeowners did it. The homeowners of our next house will do it. I'm doing it right fucking now and I still wander around open houses randomly peeking into artfully purged closets and am like, OMG LOOK AT ALL THAT SPACE!)

So anyway. Jason's closet was a damn mess. He acknowledged that, and in particular copped to a bad wire hanger habit. He gets all his work clothes dry cleaned on a pretty regular basis, and "rarely" remembers to return/recycle the hangers they come back on, he said.

"Rarely" turned out to be "never, not even once, in the damn near eight years we've lived here." 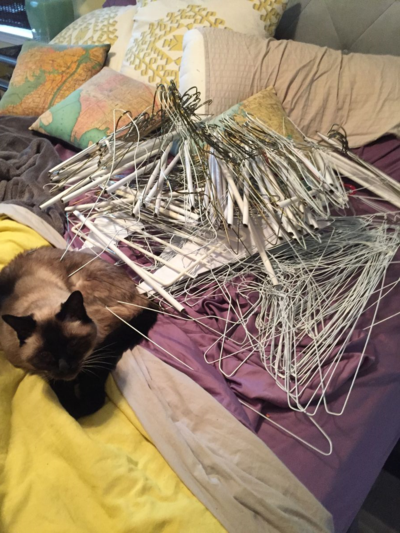 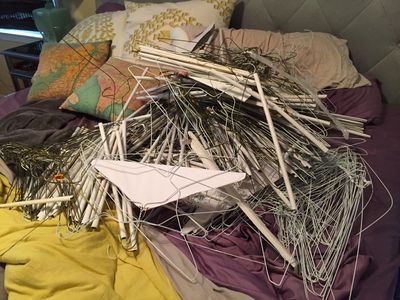 My husband, ladies and gentlemen. The Reverse Joan Crawford.

I filled an entire contractor-sized black garbage bag up exclusively with wire hangers. The best part was discovering -- at the VERY VERY BACK of his closet, a hanger return box from his dry cleaners, completely packed to the gills but never returned. It was just buried under more goddamn hangers. Anyway. I left the purging of pre-weight-loss clothing to him (which of course he hasn't done, maybe I should go stare at him some more), but I think I did a damn nice job, considering the before. Two closets down, approximately fourteen million more to go, because when we bought this place I went completely bonkers over the incredible number of closets it contains, because OMG LOOK AT ALL THAT SPACE WE SHALL NEVER EVER OUTGROW ALL THAT SPACE HOORAY!

Really impressive. I'm surprised that your staring hard at Jason didn't work, because I would certainly cave under that kind of pressure.

I LOVE your talk on closets. When we sold our first house our agent said it was "fine" and I knew it was not. She lived in a beautiful home and I asked her what she would do to her house, if anything, before she put it on the market. The immediate response: I would take out half of everything in every closet, cabinet and shelf.

I did that at our place (150 boxes ended up in temporary storage -- but that included garage stuff!) True story: just before the open house, my sister was over for dinner. She needed something and I referred her to the proper cupboard. "OMG, all this space! WHY are you moving?" And I had told her what I was doing and why.

That definitely makes me think of the silver lining of our house :-) a small townhouse in rockville previously owned by a woman who valued "open space" over "closets" so it proudly features two small sized closets throughout its entire depth and breadth of four finished floors, four bedrooms, including the entryway (no closet there!). Two. It has made closet organizing a cinch - organizing the rest of the open spaces, not so much :-)

When we recently moved from the 2200 sq foot house we lived in for six years to our current 1200 sq foot home, I was merciless in my purging. My old master closet was HUGE but was always well organized, so I never really realized how much CRAP we had in there that we never wore, had no use for, didn't remember where or how we got it, whatever...We had space for it, so it never bothered me to have it. Now, in this tiny house, I realize I am going to need to purge again after living here for a month. There is just not enough space and I refuse to be surrounded by stuff in every corner.

Good on you for doing Jason's closet. That is true love right there.

I remember a hilarious post you had around 9-10 years ago about Jason and a giant tangle of wire hangers in his closet. Any other long-readers remember that? Good times. Nice to see tires and hangers don't change.

Damn, girl. You just earned yourself a foot rub.

Although I'm also very impressed that Jason dry cleans his clothes. I....won't even tell you how long I've been wearing my work slacks.

Totally impressed by what you achieved. Also proud of you for not triaging away 1/2 his clothing. There must have been huge temptation but resisting it was right and admirable.
But am also totally awed by how much clothing each of you own! I am sort of a mild minimalist but WOW!. And, suspect you two are the normal people not me, in this country. You might even be under acquired compared to average. It is amazing for me to see however.

I remember the old wire hanger post! We have that problem here too. ;-)

We nearly put in an offer on a 900 sq ft house with no storage, the staging was that good. Seriously, no garage, basement, pantry, coat or linen closets. Washer and dryer in the only bathroom, water heater in one bedroom closet, furnace in the other. Real estate is crazy.

Your posts brighten my day. You totally crack me up. Thank you for always making us laugh :)

There are many household chores that I insist my husband (of only 6 years) participate in equally. His clothes are not one of them. I have, on the eve of our 6th anniversary, replaced everything he wears except his work boots. I even rotate what shirts appear at the front of his closet or on top in his drawer because those are the only ones he wears. It simply boils down to the fact that it bigs the hell out of me, and he couldn't care less.

So will you be returning all the wire hangers to the cleaners? If so, I wonder what they will do with them. Our "old" house had two closets. I thought I was in heaven when we moved into our current house. Closets every.where. They are now full and I need a bigger house. With MOAR closets!!

Wire hangers are the bane of my existence. I have gone out of my way to return ONE because I hate them that much. It's not until I see things like this that I realize I *may* have a problem....

My husband does the same thing with the hangers! It's like half of his closet is wire hangers and the other half are really nice wooden ones that, if he would just use those exclusively, would make his closet such a better place.

I have never seen that many wire hangers in my life. I'm impressed/shocked. (I don't dry clean anything so have very few, if any, wire hangers but hey, I've got my own problems.) I bet he's relieved not to have to do his closet! Some jobs just seem too daunting to start.