Okay, let's take a brief break from MOVEAPALOOZA 2015 and get back to what's really important. Self-indulgent photo essays about my kids. 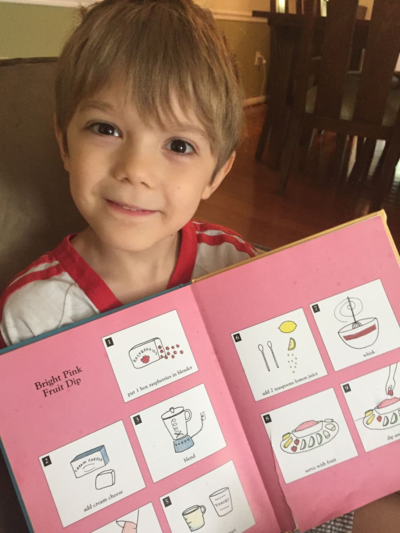 Ezra's been working his way through his Pretend Soup

cookbook for a couple years now, but just recently became quite taken with the recipe for Bright Pink Fruit Dip. 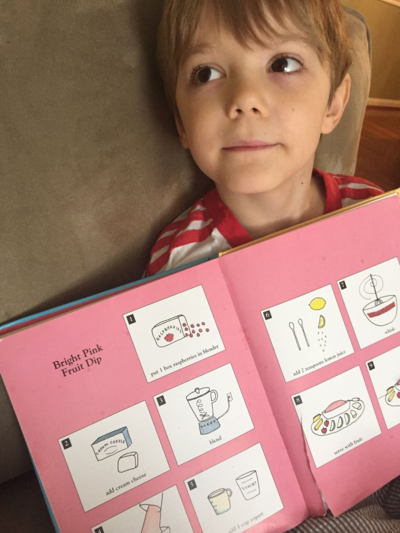 But he didn't just want to make it any old time. He wanted to make it for company. For guests.

And so he waited. Every week he'd ask if any guests were coming to our house, and unfortunately once the moving stuff kicked into high gear the answer was always no. I couldn't have people coming into my house, unless they agreed to take their shoes off, use only paper plates and also declutter at least one closet during their visit.

This weekend, though! Friends offered to come hang out and help with packing, which was completely awesome. And Ezra's moment had finally arrived. 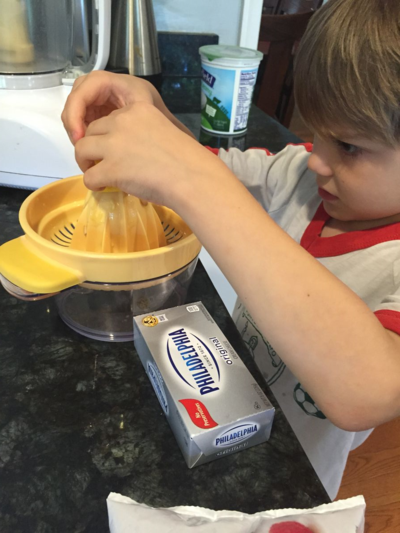 He got right to work. 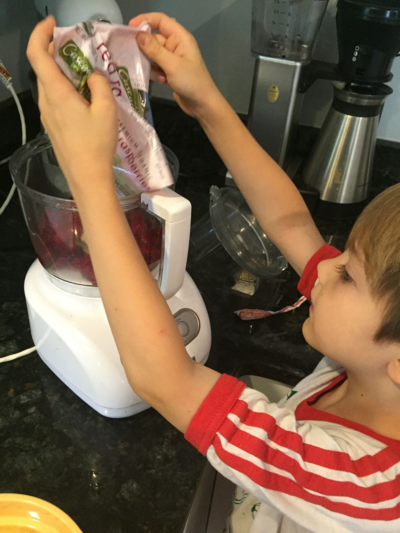 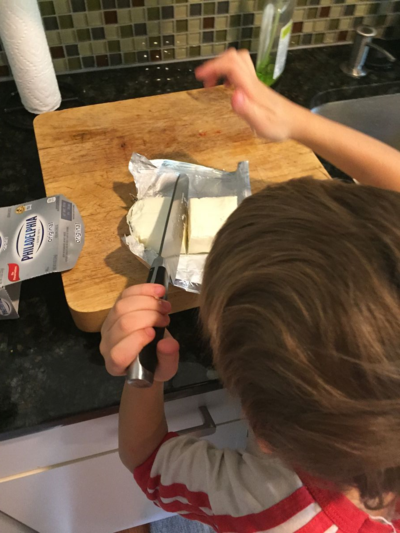 Plus half a package of cream cheese, softened. 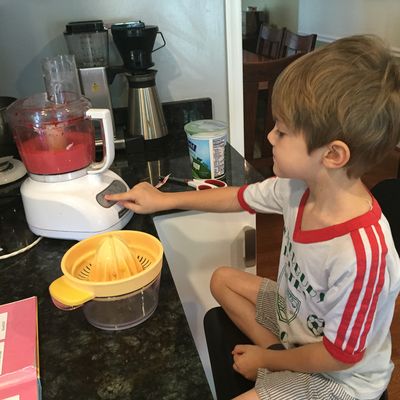 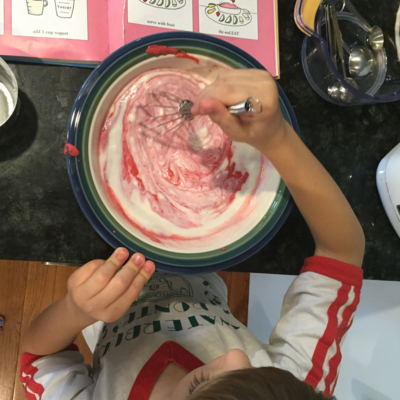 Transfer to a bowl, add one cup yogurt and two teaspoons of lemon juice, then whisk. 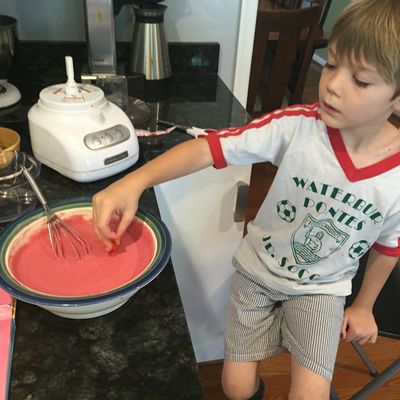 Taste test time with a strawberry from the garden.

(Definitely not joking about it being bright pink.) 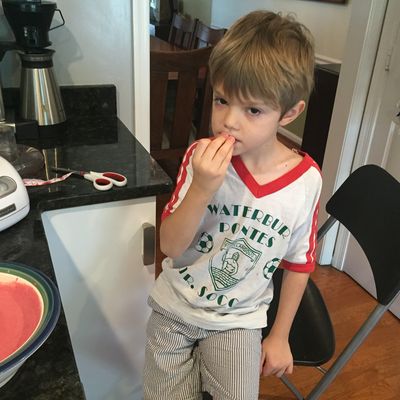 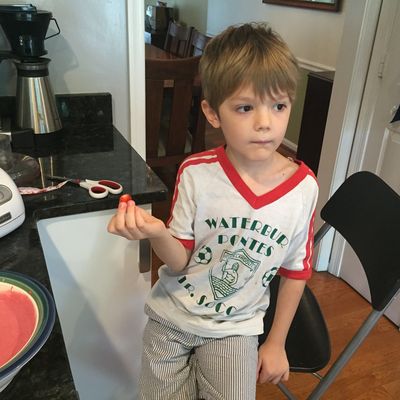 After a moment of careful consideration, he announced "It's good." 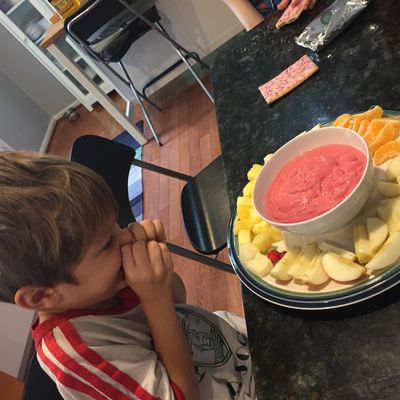 We cut up apples, bananas, oranges and some pineapple. Ezra arranged them carefully and with much glee. 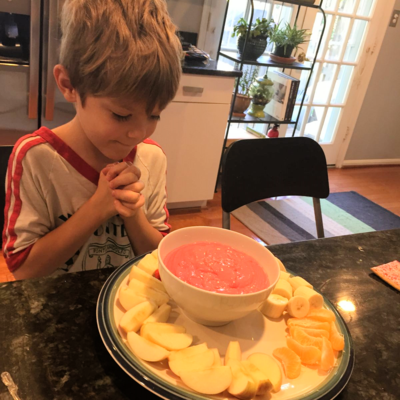 He was pretty dang proud of himself.

Our very important guests complimented the dip and presentation very highly, although nobody really got to eat that much of the actual dip because Ezra sat down in front of it and promptly ate all of the fruit.

(I also put a cheese plate out. Ezra also ate that, but gave the rest of us a fighting chance at it first.)

Later, Ezra realized we were packing up his play kitchen and all the play food/accessories. He said it was okay, because he's a REAL CHEF now who makes REAL food.

He has kindly volunteered to make a fruit, cucumber and tomato salad for us this week, though I'm starting to sense an ulterior motive behind his recipe selections. 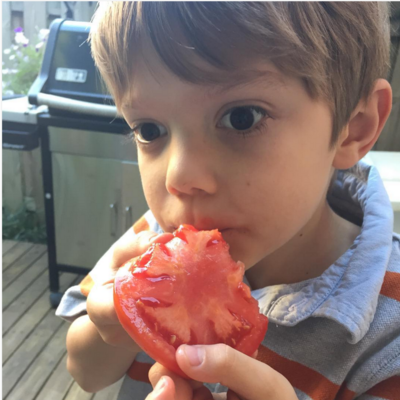 I've said it before, but.

I love me some Zah.

Ezra is too cool. You make some pretty awesome kiddos. Awesome and adorable.

I love that he loves to cook and you encourage it! And when he asks for broccoli instead of chocolate for dessert! Mighty Chef Zah! You are goin' places, kiddo!

We're gonna be seeing that kiddo on MasterChef soon! Love it!

I adore his concentration face! A little worried about the murderer-style grip he's got on that knife tho...

The glee, man. The glee.

Awesome! You go Ezra! Pretty soon you can set him up with his own night for cooking dinner for the family.

Ezra's kindness and caring for others comes across loud and clear every time you write about him. I love that he's learning skills he'll be able to use for the rest of his life.

And I can't fault him for his menu choices, either. That stuff sounds delicious.

He is amazing and his glee face is the best. I need to get that book for my kids now, too.

I love this child

This is the best. Just the BEST! Totally buying that book for my daughter.

Absolutely precious. He's so proud in those photos! Top Chef!

I love his presentation - so classy!

And ha, I have that same pfaltzgraff pattern for my dishes, however several of the serving pieces have been destroyed over time (both platters, a low serving bowl, and a few other things).