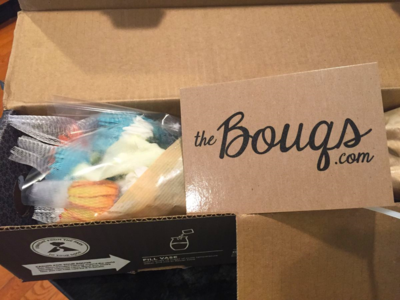 A couple weeks ago, I bought some flowers. For myself. In the grand tradition of Treat Yo Self, I ordered not one, but TWO giant bouquets of gloriously happy-colored flowers.

I ordered two because I received two promo codes as part of the compensation for this post, although I THINK MAYBE TECHNICALLY they gave me two codes so I could send a bouquet to someone else. 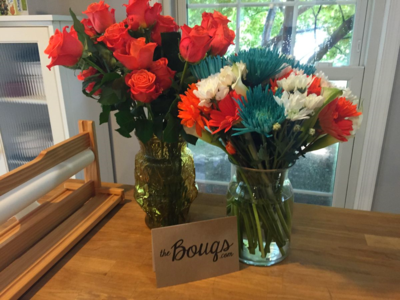 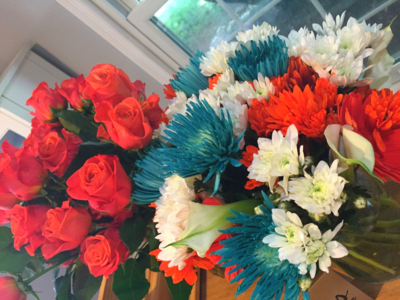 However, I was kind and generous enough to write myself a note to accompany my flowers:

Dear Self of Next Week,

Congratulations of finding a new house! If you did not find a new house, please quietly weep into these beautiful flowers.

Self of Last Week

P.S. Get your roots done.

(I found a house! AND got my roots done. Clearly I earned both of these bouquets as a reward for such unparalleled productivity.)

And now my Self of the Week After That is STILL enjoying both the relief of finding a house and my happy orange-y blue white flowers, which Jason and I have affectionately taken to calling Amy's Volcano Flowers. Because yes. These are literally grown and shipped directly from the side of a actual volcano in Ecuador, so I can now safely say I have found ONE THING about volcanoes that doesn't utterly terrify me to my core. 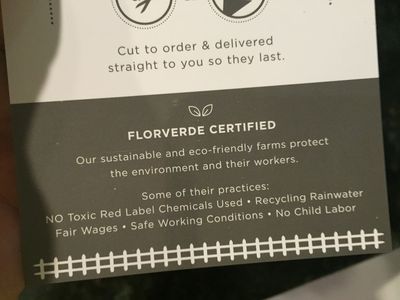 Thumbs up to all of this, although my brain refuses to compute "Safe Working Conditions" into anything where "Working On The Side Of An Actual Volcano Oh My God" is part of the equation.

But I was never good at math, and always irrationally afraid of volcanoes. Anyway, volcanic soil is really amazing for flowers and I LOVE flowers so I guess I've formed an uneasy truce with volcanic soil.

(Lava, on the other hand, is still on My List. There is nothing good about lava except maybe it's a decent cardio workout to run from it.)

(Haha look at me cracking jokes like I'm not actually crying right now and reliving every childhood nightmare ever.)

Let's go back to the pretty flowers. 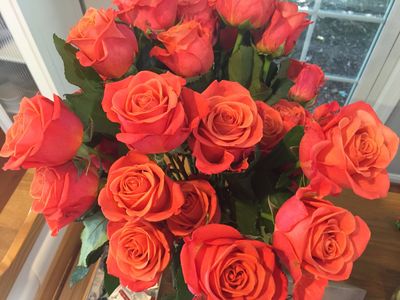 The roses opened up beautifully. And HUGE. Not a single dud in the bunch. By far the nicest and longest-lasting roses I’ve ever received. 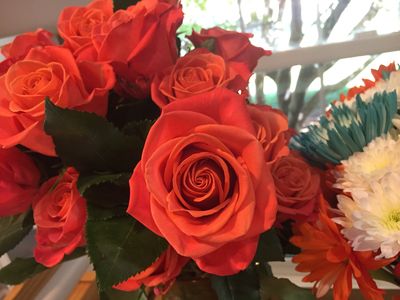 (And I’ve received more than my fair share of roses over the years, because I married a smart person.) 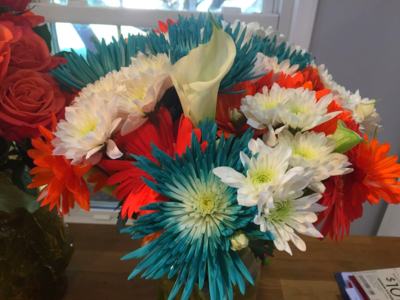 This bunch was so huge I was tempted to split them up into smaller vases and have flowers in every room of the house (and maybe half the rooms in the Yellow House), but I loved how they matched the roses. Plus it's super nice being greeted by BAM A MILLION VOLCANO FLOWERS FOR YOOOOOOU every time I walk into the kitchen. 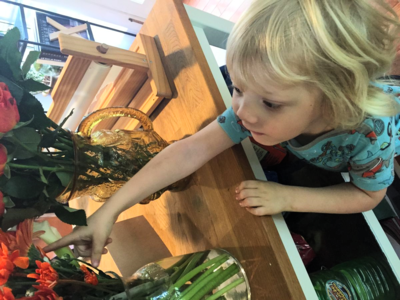 While I'm obviously overly partial to orange flowers, the blue ones are Ike's favorite. He keeps asking to smell them because they smell "byootiful."

Would you like to send Volcano Flowers to a special someone? And is that "someone" possibly "yourself"? GO FOR IT. Good luck choosing from ALL THESE AMAZING BOUQUETS, though. I can't help you with your decision-making, but I can help you with a discount: Use the code SUNSHINE and get 15% off your order!

(Note that code expires one week from today. Thanks to TheBouqs.com for sponsoring this post and letting me Treat Mah Self.)

Beautiful flowers! But now . .a few very important questions .. picture yourself at ~80-90 years of age receiving these . .was the box easy to open? was the bouquet easy to assemble? was the mess at an acceptable level for cleanup? I have been trying to find a substitute for proflowers and/or the expensive deliveries in vases for my elderly Mom and church lady friend. BOTH of them said NO MORE PRO FLOWERS because while the flowers have always been fine - they were too hard to open, assemble, and clean up .. .

Print that last picture out and frame it! It needs to hang in the Yellow House.

Yes!
Purchased some for MIL on the mend. She's going to love them. Thanks for the code :)