So as it turns out, the "putting shit back together" phase of the kitchen remodel is EVERY BIT AS LOUD AND IRRITATING as the initial "smashing shit to hell" phase. It's just a bit more rhythmic and water torture-y.

The crew's been installing cement board since Saturday, and it's like:

...for hours and hours on end.

Our children are handling the chaos and noise just as I expected, which is terribly. Even though I'd generally describe the breakfast time decibel level around here as OMG WHY ARE YOU ALL SO LOUD STOP YELLING HERE PUT MORE FOOD IN YOUR FACE HOLES I HAVEN'T HAD COFFEE YET, they are all suddenly very Downton Abbey about their morning meal being disrupted by construction noise. Covering their ears and expecting me to DO SOMETHING about it, they cannot CONCENTRATE on the important task of eating an entire box of Corn Flakes in a single morning, also, where are the WAFFLES, Jeeves?

In the freezer, staying frozen, because the toaster is in the family room and I don't feel like walking that far.

much dismay and dramatic weeping

We planned to spend as much time out of the house on Saturday as possible; a plan that went practically immediately awry when Ike suddenly barfed all over the floor (and himself) in the middle of Target.

(Hooray! We have officially christened our new Home Target with our first "uhhhh sorry my kid puked/peed/did something unspeakable in sportswear" moment.)

We hightailed it home before the next onslaught, which...never came. Two hours later he was like: 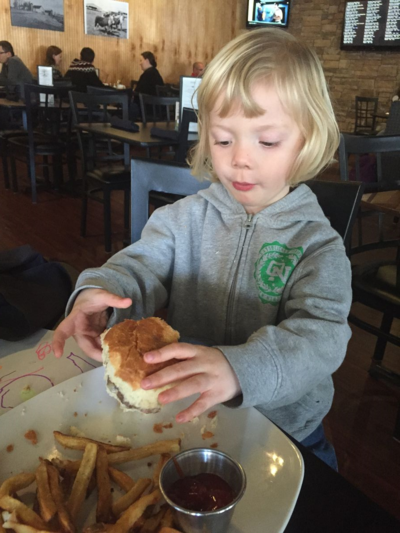 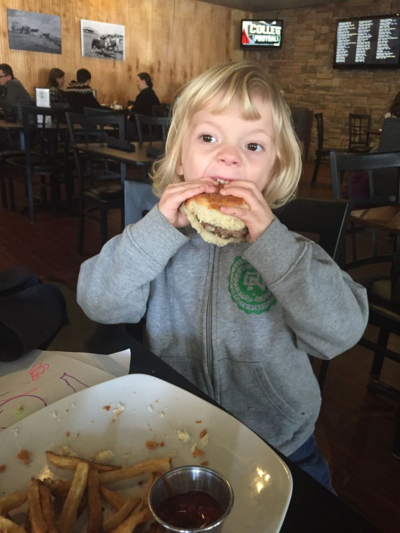 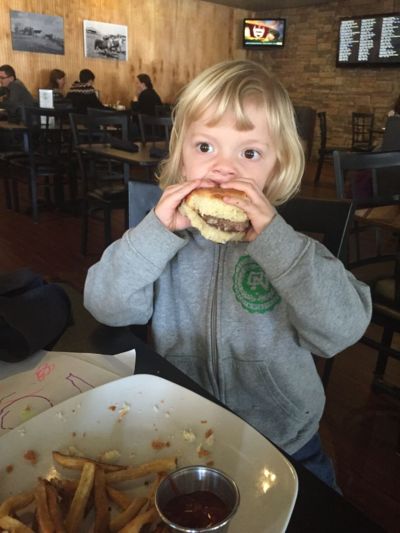 He ate the whole thing, plus the fries, then had some chocolate cheesecake. So...I guess we dodged a bullet there. Nobody else has gotten sick since, and hey! it wasn't even my carpet he yakked on! Things are coming up Milhouse!

Cabinets are here. Getting started on those either later today or tomorrow. 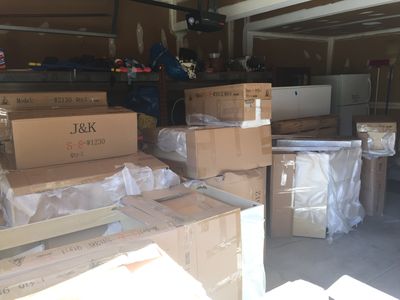 Wow, even the cabinet boxes are like "jk"! They know their arrival teases you.

I feel you. Back in November I had hardwood flooring installed in my (small) hallway. I was thinking that it wouldn't be bad. Nope! Massive noise for five hours! Making it worse was that the burning smell produced by the circular saw cutting the boards pissed off the smoke detector and it kept going off. My husband left me alone with the noise and the crew, and I think he still owes me a HUGE favor for managing all that while he went out and bought video games. (Did I mention this was Black Friday? Because it was.)

FYI, from your previous post about the light fixture, if you haven't already decided on a plan for the lighting, you may want to talk to your contractors about that before flooring or cabinets go in - if you want recessed lighting, that may involve tearing down huge chunks of the ceiling to put the cans where you want them, and then re-drywalling the ceiling and painting it - you don't want ceiling paint spatter all over your new flooring or cabinets if you can help it. If you want switches in different places than they are currently (if you put in fancy lighting and want an option besides 'all on' and 'all off') the walls will be cut into as well - so do that also before cabinets. Also consider having outlets and switches installed for undercabinet lighting, even if you don't actually put the lighting in as the first part of the remodel - there are retrofit options where all you need is a free outlet, and a switch is nice but not 100% necessary (you can flick the switch under the cabinets). Having under cabinet lighting makes it so much easier to see what you are cutting, since you won't be blocking the light with your shadow, and it looks fancy for not a ton of money.

Just whatever you do, don't make your kitchen like certain relatives of mine who will remain unnamed, who put in recessed lighting, and then a ceiling fan - it creates the most awful, migraine inducing strobe light effect.

And you didn't even have to clean it up!

I sympathize on the noise. The house next door has been undergoing a major renovation for close to six months. The people who bought it are not yet living there, so they don't have to listen to it every day. But I do. It's bad enough with the noise being next door; having it inside the house would make me crazy.