I WROTE A BOOK

I did! I really did.

But not a book for you.

It's you know, for kids.

(But I guess since kids don't have all that much money of their own, and the target audience is probably in the pre-Tooth-Fairy dollahdollahbills age range, maybe I did write it for you. To buy. With your money. YOU ARE SO WELCOME!!)

After I wrote about the incredibly helpful pre-moving book I made for Ike through TwigTale.com, they reached out to say thanks, and then a couple emails later they asked if I could write a new book for them in time for Halloween. 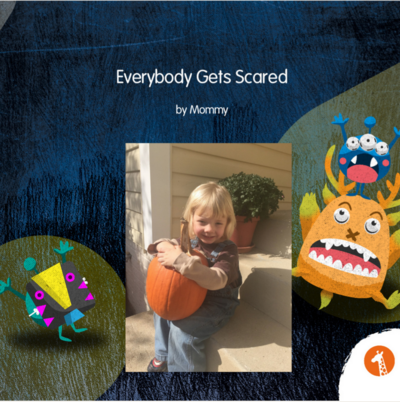 This book is essentially a much more beautiful looking version of a social story I created for Noah when he was a preschooler, back when EVERYTHING about Halloween terrified him. The costumes, the decorations...anything vaguely Halloween-like stressed him out to the point that just leaving the house became difficult. The costume shop at the mall! The billboard advertising the haunted hayride! The CANDY AISLE IN THE GROCERY STORE.

As with All Things Noah, we eventually learned that letting him acknowledge and actually feel his fear worked much, much better than having him fight it, or trying to logic him out of it. And for US to acknowledge that even if the thing he feared wasn't "real", his feelings of fear were very real.

And so I tried to create a little script for him that took that tact, something that treated fear as a normal, healthy emotion, then reminded him of past fears he'd conquered or things he was "brave" about in everyday life (riding a bike, trying a new food, etc.). I recited it in the car, at bedtime, whenever. It was simple and soothing and sing-song.

(And of course I always included a little corny silliness to make him laugh. Thomas the Tank Engine was quite scared of broccoli, if I recall correctly.) 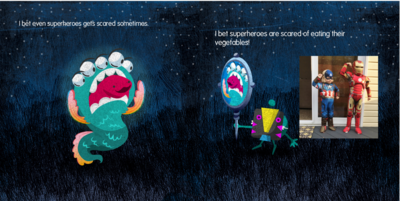 This book can be completely customized to your child's specific fears and worries, and to the things your child feels "brave" about or past fears he or she has conquered. It assures them that being scared is a normal, universal emotion and (hopefully) gives them the words they need to talk about and work through their fear. You can use the script as-is or rewrite it completely. Add your own photos or nah. (The illustrations, which I did NOT create, are probably my favorite thing about the whole book, to be honest.)

The first 25 readers can get 20% off with the code AMYBOO20. If you want the book by Halloween, you need to order by MONDAY to get it in time.

(But of course, kids and fear and nightmares are a year-round celebration, so it'll still be available whenever your kid decides to freak out over ghosts or auto-flush toilets or whatever.

Kinda makes me wish I had some little kids, or even KNEW some little kids. Heck, I may just get it for myself. Because you know, monsters under the bed are still a REAL thing!

That is the sweetest thing ever.

First of all, what a lovely idea. Second, OMG autoflush toilets!!!! My 3 year old isn't the only one petrified of them? It's the WORST when she has to go urgently and we finally get her to the bathroom and she's like oh HECK no I'm not using that thing it's going to suck me into a vortex of my own filth and I have to convince her that she is perfectly safe PLEASE just use the potty. Please.

We need more books for ASD kids, and this one is adorable with those illustrations and the pictures of Ike.

You are awesome! Well done!!

And my 4-year-old is ALSO scared of autoflush toilets! If I hold my hand in front of the sensor it generally keeps her calm and doesn't flush. (At least, it doesn't flush most of the time.)

Well, is that just the cutest thing ever. And a great reminder to me to let my kids feel their feels and have their fears. So great.

This is sweet and beautiful. Love the great pictures. You guys are such great parents.

I'm sure you have heard it for auto flush toilets but when my littles were potty training, I carried post its to put over the sensor.

Love this book! You did an awesome job.

This is lovely. It reminds me of when Noah was scared of the water on your vacation, and you were sad, because you wanted him to enjoy the water...and you threw sand? rocks? at it, and said, "You don't scare me, water!" I envy you when you have these awesome parenting wins.

Also - "It's you know, for kids". Is that a reference to The Hudsucker Proxy?