Let There Be Light at the End of This Tunnel 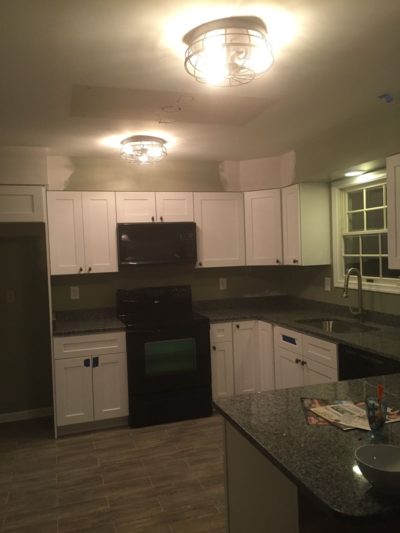 (Well, two of them. We're converting the light over the sink next, and probably swapping the hanging fixture on the other side at some point.)

We said a happy farewell to the big fluorescent plastic box of dead bug corpses yesterday and put these industrial-ish style fixtures up, which may or may not have been chosen primarily because there is no place for bugs to crawl inside and die. 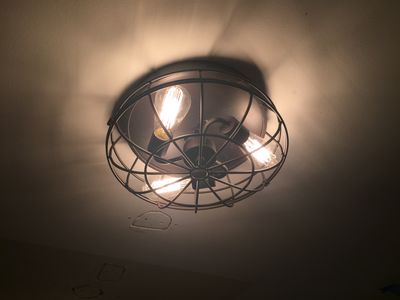 Also, Edison bulbs are warm and glowy and happy-making.

These were actually the very first fixtures I looked at

and was like, "BAM THOSE," but then the dude supervising the remodel told me no, those are too big, you want something smaller. And so I've spent the last couple weeks searching for a smaller alternative, while this particular fixture followed me all around the internet via programmatic advertising. Finally I just went WHATEVA I DO WAT I WANT I'M A LIGHTING REBEL and ordered them.

I am also !!!!!!!1!!!ELEVENTY! excited to have a working sink and dishwasher again. Although: 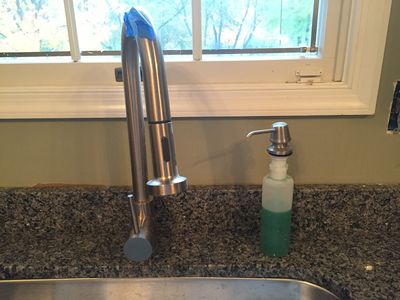 Today the rest of the cabinet hardware gets installed and the ceiling repaired, then Jason and I will be left to our own devices to get everything else finished, other than the Wrong Cabinet of Wrongness. I remember WHY we opted to do everything else ourselves ($$$) but I have to admit that right now I would love to just throw a ton of dollars at someone to just get the shit done already.

But wall aesthetics aside, it's nice to have a workable/usable kitchen again. 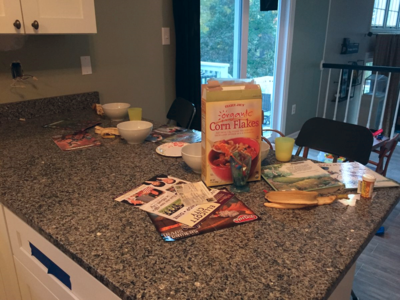 Along with a reminder why I will never, ever be considered a "lifestyle blogger." Unless we're talking about the lifestyle where you have better things to do (aka eat Girl Scout Cookies on the couch) than staging photos you take with your phone. That one I could get behind.

Wait, what's the "whoops" with the sink?

Mere words cannot convey just how perfect and wonderful and awesome and beautiful and and and your lights are. Lightbulbs and all. They are like fans, and the light is being gently blown down to cover your new kitchen of beautiful counters and cabinets and floors. You receive an A++++++++++++++++ in my book.

And I am so jelus of your kitchen. I will go home and weep over my old floors and counters and cabinets. Sad face.

Looks great! I am also not sure what is wrong with the sink...

That soap dispenser is supposed to be installed in the countertop. That's the oops for those of you that were wondering.😉

Link to the lights please

Yes, there was supposed to be a second hole drilled for the soap. That's the whoops.

@Brenda link to the lights is the bold text about how they were the "first light fixtures I looked at."

Meh. I opted out of the soap hole. I heard they're a bear to refill. I pulled the sticker off an old Soft-Soap dispenser and filled it with dish soap. I keep it in one of those suction cup holders on the inside of the sink.

That "meh" was for the soapholder. Not your gorgeous kitchen.

And that's why it doesn't matter what anyone else likes. I would never have picked those lights. (Though, not because they're too big. I don' t get that reasoning.). Nor would I have been happy with them if someone had put them in my kitchen. You love them and that's all that counts.

For paint colors, what about Behr's Agave? Continues the industrial without being cold.

Well, since you asked.....hahaha......I'd suggest a light gray. And, as gray is notoriously THE hardest color, as it tends toward blue, or green, or purple (don't hate me) I'm not going to suggest any particular light gray. Other than to say stay away from darker or more saturated tones, as you don't want a super dark area.
That said, grab yoself those little samplers of colors and go to town--put a ton up and on many different walls--it will look completely different in your house than in the store, and will look completely different on different walls. But I guarantee you'll find one you love (cough cough Benjamin Moore Abalone may ir may not just have been used in my kitchen)

My kitchen has a built-in soap dispenser...that doesn't dispense. I opted for a cheap aluminum dispenser on Amazon. It immediately rusted a hole in the bottom. Now I'm waiting for my upgrade to come from Restoration Hardware.

Worth it to me to spend the $$ on something sitting out on my counter every day.

I've got a soap dispenser. It's not at all difficult to refill. Kitchen looks great! Can't wait to see what paint color you choose.

I think a seafoam would look fabulous with the white cabinets.

Abalone is a fabulous light grey that's not too blue or purple-y. If anything its a little too light? But if your kitchen doesn't get a ton of natural light it shouldn't be a problem.

Yay! And I HAAATE my soap dispenser. One more thing to clean around and build up hard water scale stuff around. Hate it. You totally lucked out. :)

I love love the lights!!! For the color i'd go with a "gray-iege". A gray beige. Match it to the lightest shade of your counter which hopefully matches the light shade of your floor tile. Good luck!

Um...just have to point out that it would have been so much easier to paint before everything was installed...sorry...I'm full of helpful observations...

I'm pretty sure I just saw those light fixtures in table lamp/fan form on Project Runway.