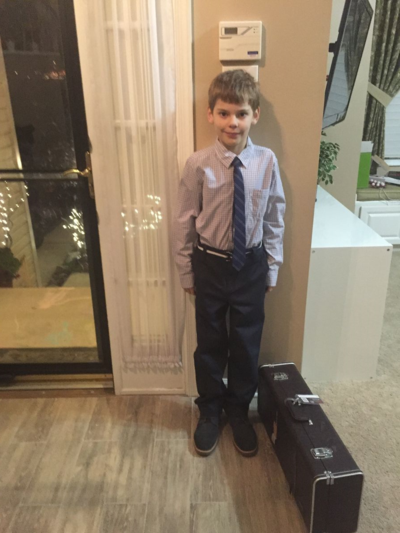 Noah preformed in his very first concert with the school band. We had to rush out and buy this entire outfit, right down to the shoes, because we are sloppy heathens who don't own church clothes.  Or even nice clothes.

Noah was a bit nervous about the concert, even expressing hope over the weekend that he would catch the stomach bug from his brothers and be unable to perform. But he didn't, and he did absolutely great, playing front and center onstage as first chair (!!) saxophone. 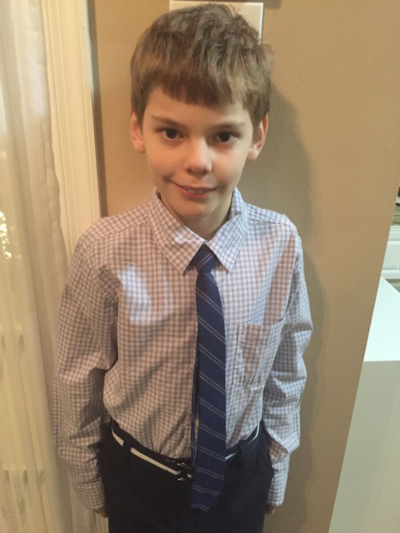 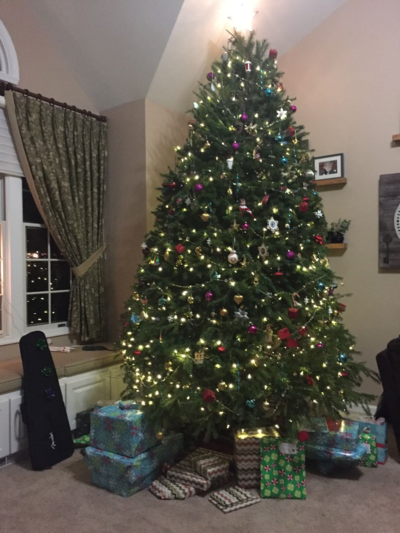 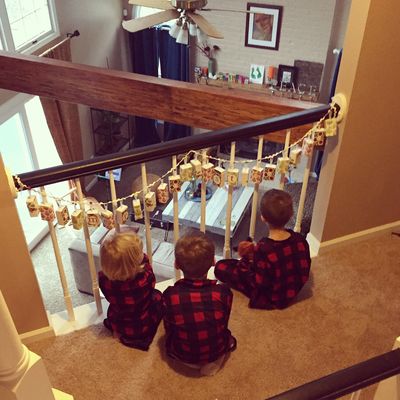 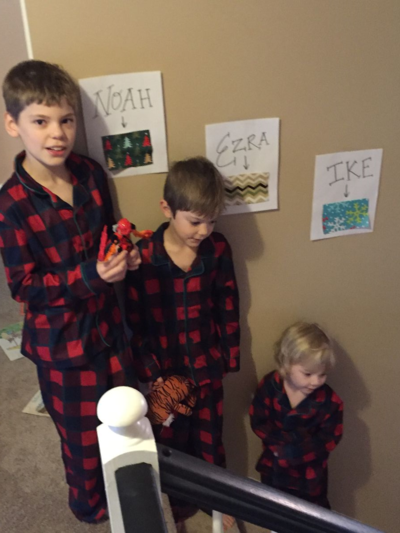 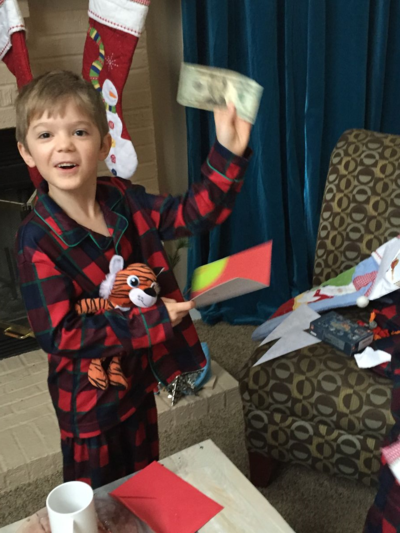 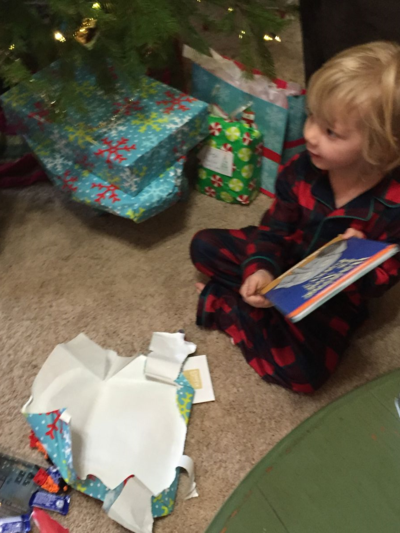 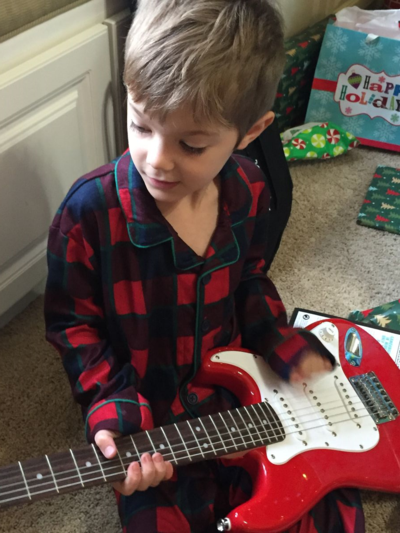 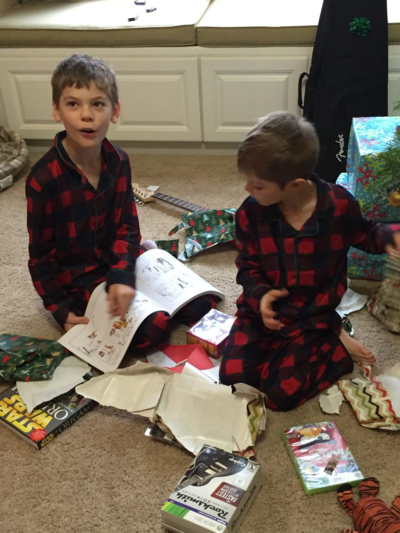 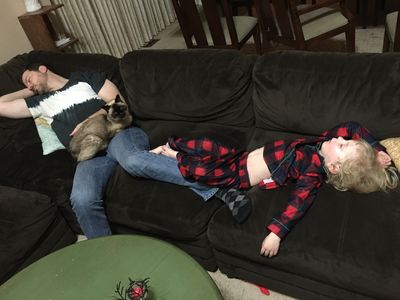 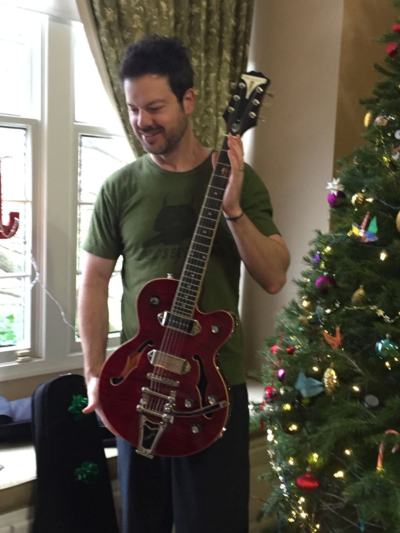 So! This is a story worth telling: Jason takes Noah to his saxophone lesson every weekend at a local music place, and about a month ago started sending me photos of this guitar (Epiphone Wildkat) they had for sale. It was used, in perfect condition, at a really good price, and every Saturday he'd take it off the wall and play it for a bit, falling ever more deeply in love. As he'd JUST purchased a regular guitar off Craigslist (to jam with/encourage Ezra, who only wanted a red "rock-n-roll" guitar for Christmas), I remained unimpressed, said no, and also I was almost completely blind and deeply diseased.

But I called and bought it over the phone (!!) and asked them to hold it until I was recovered enough to drive/be seen in public.

That next weekend, I got a series of sad/angry texts from Jason because "GODDAMNIT IT'S GONE SOMEONE BOUGHT MY RED GUITAR."

Yes. Someone did. Merry Christmas, honey! 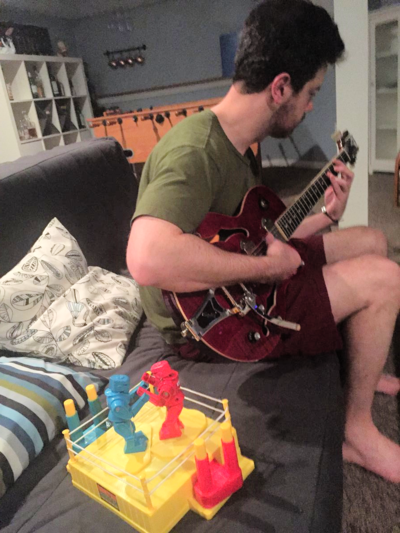 Christmas 2015: Year of guitars, Rock'em Sock'em robots and the Christmas we all wore shorts in 73 degree weather. 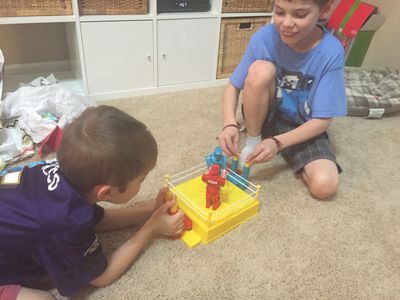 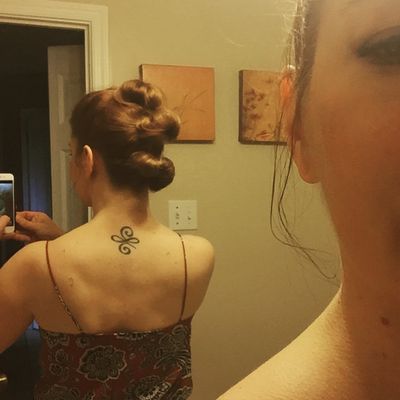 And deeply committed to my new Rey-inspired hairstyle, so that I may permanently live my life semi-cosplaying as a 19-year-old Star Wars character. So not even kidding with this nonsense.

On my birthday we went to the Lego Store and saw Star Wars for the third time. No one threw up or came down with pinkeye. Can't ask for anything more than that, although Jason continues to have pretty bomb-ass taste in jewelry and restaurants. 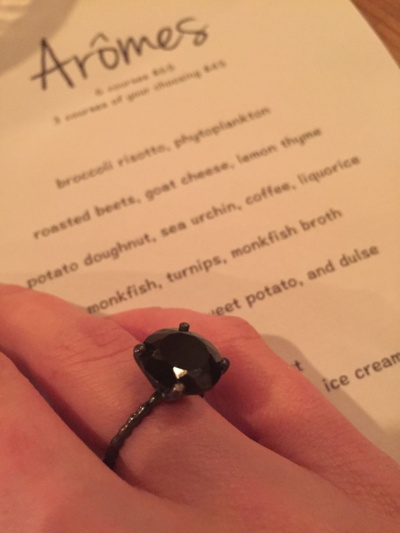 (Special gooey thanks to readers Heather, Magpie and Tiffany who sent Sephora gift cards, thus making the [admittedly heavy-handed but hey it's been AWHILE] eye makeup in the above pictures possible. And an extra thank you to Michael, for once again being an amazing Secret Santa for my kids and spoiling them completely rotten.)

Wow wow wow on Noah being first saxophone. Impressive! And why didn't I ever think of using different wrapping paper for each child?

You're so welcome! Glad the eyes are back in Happy Lala Makeup Land (a good place to be) and that hairstyle is really cool -- I may even have to see the new Star Wars now???

Damn, that restaurant is in my neighborhood and I haven't even been there yet! Good? Worth the $$?

Aw yay! Yay for eye makeup and secret Santas and Rey's kick-ass hairstyle and being able to surprise significant others and for bling and awesome restaurants (there are no restaurants in Seattle that serve phytoplankton...I think). Yay and Merry Christmas!

That was some epic napping there in the middle!

As a mother of two sons (25 and 18) who LOVE guitars and started asking Santa for them at a young age, it's still a THANG! We even own a vintage store now.....LOWE Vintage Instrument Company. Check it out!

Noah is old enough to be in the SCHOOL BAND?!? What the hell, that's not okay!

I've been doing the different wrapping paper for each kid since they were super little. I put a folded piece in an envelope with their name on it, and it's always a big deal when the envelopes are passed out. Nice bling and eats, too. Happy birthday.

Glad to know I don't mother the only sloppy heathens in this world. Dressy clothes only purchased on an as needed basis here, too.

Damn, that ring. Good to know Jason doesn't pull any of that "this is for Christmas AND your birthday" crap. Happy holidays and a very merry 38th!

Happy birthday! You look fantastic! I have always enjoyed your writing!

So many good thangs! Love the photo of Jason, Max, and Ike.