The Christmas Tree That Momentarily Distracted Me From The Pinkeye

Finally, something not about my eyes. (Which are finally, definitely improving, albeit very slowly. I've almost forgotten what it was like to see the world non-blurrified and darkish.)

(Dammit, I lied. Sorry. One parenthetical about my eyes and that's it! Moving on!)

This weekend my sunglasses, hand sanitizer and I ventured out into the world in search of a Christmas tree. 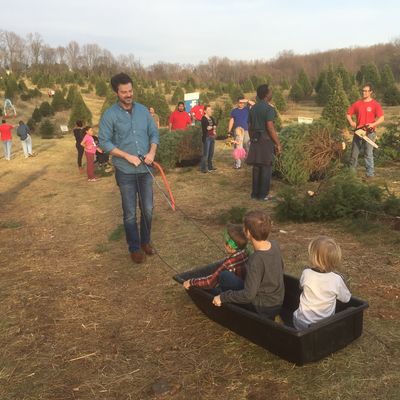 We've never gone to the tree farms this late, so I gotta say, pickings were slim, small and/or very lopsided. 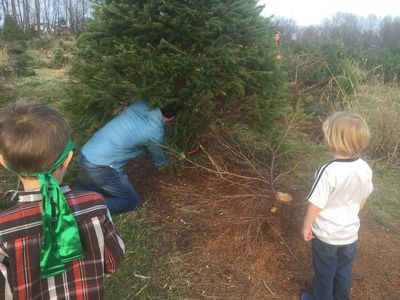 Eventually we found one with only a small bald patch that we figured would face a wall anyway. 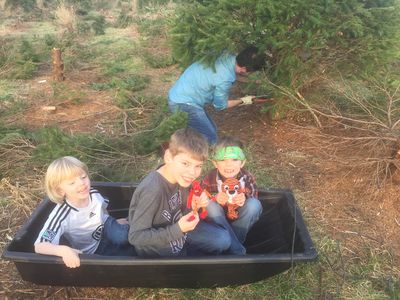 Jason got to work and the boys (plus "Tahu" and "Hobbes," who now go everywhere with us and must be addressed as proper members of the family, plz take note) got to mugging. 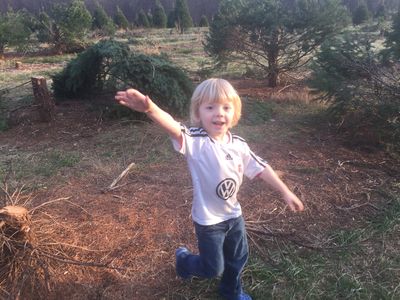 (Side tangent, but what was UP with the weather this weekend? Decorating a Christmas tree in 70 degree weather? Kids riding their bikes around the neighborhood in shorts with Christmas music blaring out of open windows? It was like living somewhere NICE where the weather doesn't suck ass 90% of the year.)

Once we got the tree home we realized we may have gone a little overboard. 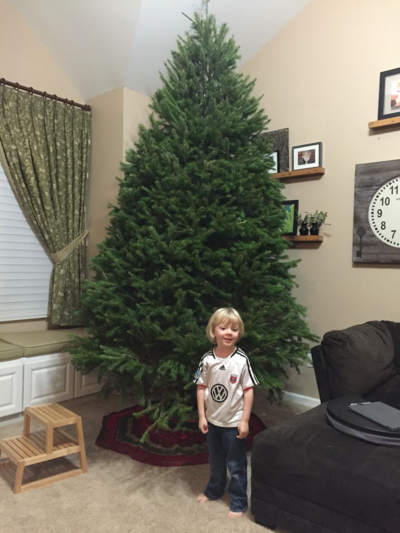 Tiny bit jazzed about the vaulted ceilings, yes. And completely forgetting that we don't really own a proper ladder. 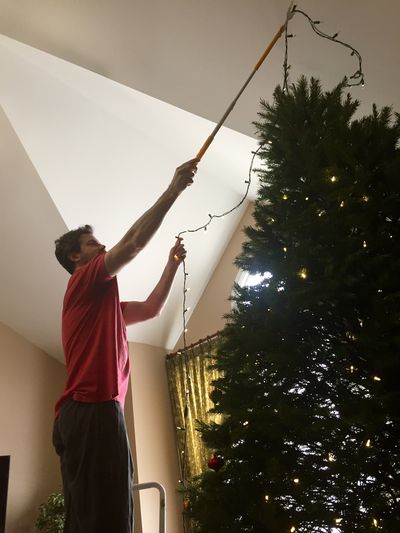 So there was some improvising with a Swiffer Duster extend-o handle. 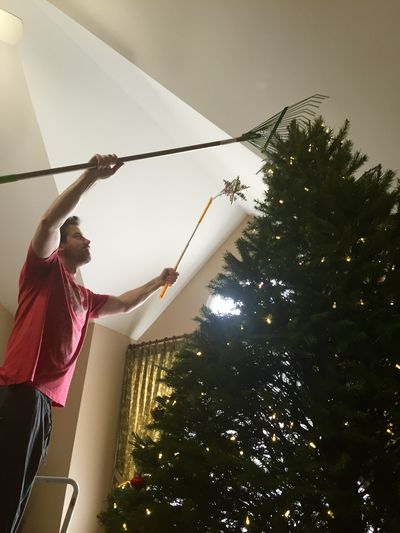 And then a rake may or may not have gotten involved. And in the end, we miraculously had enough lights and ornaments to cover all the visible real estate.

(We gave up on the star and ordered a bigger one with a different style base. Jason is confident his Swiffer handle plus rake system [patent pending] will work once it arrives.) 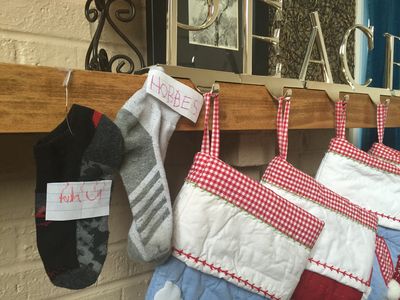 Once the tree was done, the boys decided to decorate elsewhere in the house. 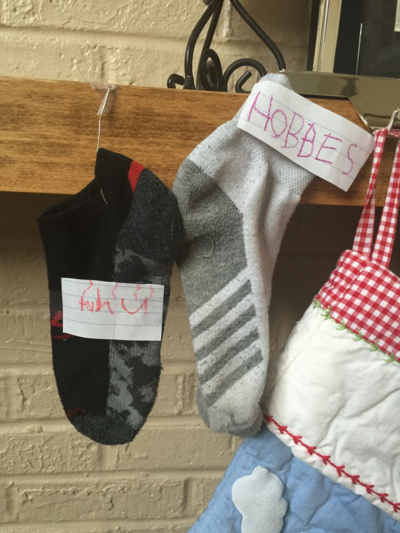 Why yes, those ARE random socks attached to the mantel with Scotch tape and paper clips, labeled "Tahu" and "Hobbes." 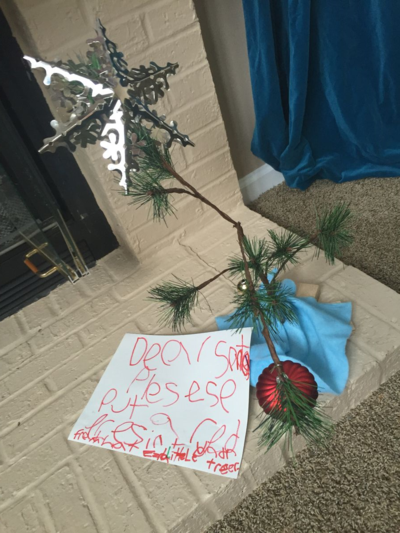 And naturally, that's a Charlie Brown Christmas tree with the old star attached next to a note instructing Santa to leave a "red present" underneath and no, I have no idea what kind of "red present" Ezra is talking about. Bearius Care, perhaps? 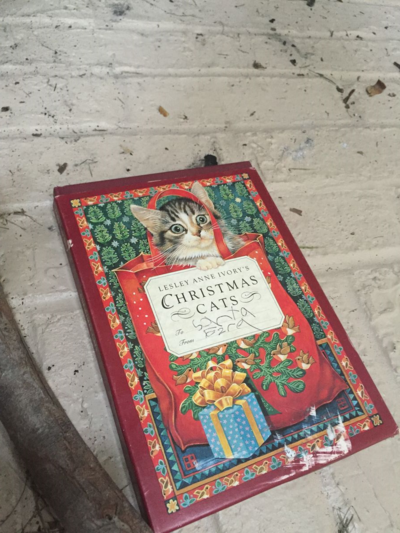 But OF COURSE, there's also a random book of Christmas Cats (???) next to the firewood, a gift to Santa from Ezra. It's also red? 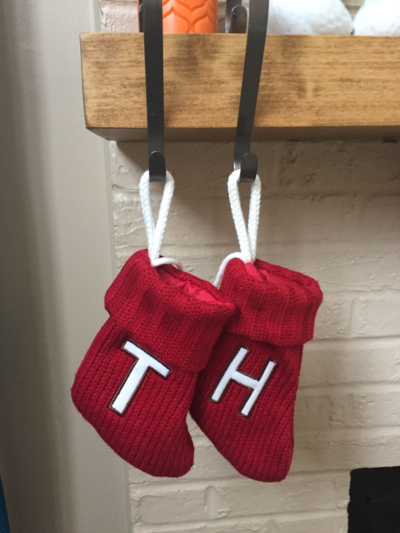 The taped-up socks have since been upgraded to these $3 mini-stockings from Target, purchased by an indulgent father who is probably more excited about our giant tree than anyone else and is just going full-on festive and whimsical and strewing lights on bushes and shit. 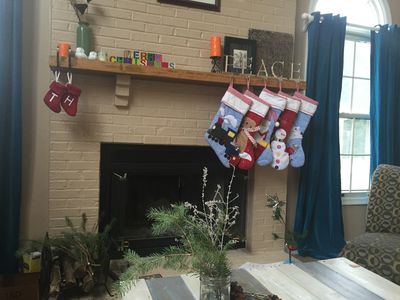 Hobbes has asked for a can of tuna fish in his stocking, while I'm unsure of Tahu's request because it probably has something to do with Bionicles and I simply actually literally cannot absorb any further information about Bionicles beyond the fact that Tahu is the Red One. He probably wants the Mask of Blah Blah Blah or the Sword of Yadda Yadda, but something tells me he's going to get a mini-sock full of Halloween candy instead.

A. That's a really gorgeous tree! Dayum, perfect green and shape. Ours is fake and as I put it up a decorated it in a fever of "Holy shit it's the middle of December" I step back to realize the top is leaning and at that point I said "Fuck it" and yet another year of Martha Stewart aspirations are done. B. That is so stinking cute that Hobbes and Tahu have wee stockings

I totally have those same stocking holders. And your tree is awesome.

I saw you guys at the tree place! I was the parent who was playing clarinet with the kid musicians (three of whom are my own kids). I actually saw Ike first and was like, "hey, that kinda looks like...OH!" but I didn't come over to say anything because 1)I didn't want to be random creepy stranger off the internet (even though I'm not creepy and I know people you know IRL who can vouch for me AKA Jodifur) and 2)the aforementioned clarinet playing. So glad you got a tree though it seems like awfully far to go for one, and I hope we didn't scare the boys with our slightly out of tune, non-rehearsed wrong-note-laden Christmas carols. My teenage daughter says the boys are adorable. Glad the eye is improving! Our kids never got so far as hanging up random socks for their loves, but we did have some homemade stockings made of felt for both hamsters and fish. You gotta love their kind hearts.

Your tree is gorgeous!

And I literally lost it at the socks for Tahu and Hobbes. Tis the season where the toys want toys, ha.

The tree looks FANTASTIC! Bravo to you and the guys!

The tree looks amazing! Why do they always look shorter outside? Thank heavens for the vaulted ceiling, and the improvised decorating. And if necessary, it can become a family story: remember the year the tree was so tall, the top didn't get decorated?

Glad you're feeling better! You should put Hobbes' and Tahu's stockings after yours and then it would read "Peace-th"!! Maybe that's a verb, like "Go out and peaceth the people." Or "peaceth yourself!" :-)

Glad I'm not the only one concerned about Bluen and Bube!

Where did you get the stocking hooks for the indulgent stockings?? Someone please point the way!

The tree is gorgeous! (Did Jason run a wire or strong rope/string from the tree to the window frame or wall to keep it from falling over? Sometimes the giants tip over...our 15 footer took the plunge! Just saying...)
Yes, what about Bluen?

Is that ornament at the top, front and center, a mini Starbucks red cup or a prescription bottle to fondly remember The Pink Eye of 2015? Haaaaaa, sorry.

Glad the eyes are being less assholish. I like big, um, trees. And you're right; I can't with this weather. More than once last weekend I was all what in the actual fuck? It's after 6 yet we're still sitting outside just because we can. It's delightful, yet wholly wrong when paired with the thought of reindeer.

Jason might want to try a broom instead of a rake. We have a big ladder but can't lean over far enough to reach the top of the tree.
And I second the concerns above about Bluen. I hope s/he is not forgotten.