The Pinkeye That Ate Christmas

One week ago, I looked in the mirror and said, "Yep, that's viral pinkeye, right there."

And then went on my merry hand-washing way, because viral! What are you gonna do?

"Well you can't just do NOTHING," Jason said a couple days later, staring at my eyes in horror. "You look AWFUL."

I argued with him for a little bit, then Googled some more, eventually coming across a description of Epidemic keratoconjunctivitis.

"STOP DIAGNOSING YOURSELF," was the reply. "GO TO THE DOCTOR."

And thus, the journey began. Antibiotics, worsening symptoms, symptoms that could be something other than "just" pinkeye, a referral to an eye center that said oh, sorry, we sent ALL OF OUR DOCTORS TO A CONFERENCE TODAY ALL AT ONCE, WE CAN'T SEE YOU UNTIL MONDAY, a massive allergic reaction (IN MY EYES) to the antibiotics, more antibiotics, steroids, corneal abrasion and possible orbital cellulitis.

I am happy to report that the journey more or less ended today, when the eye center's cornea expert looked in my eyes and said, "Yep, that's viral pinkeye, right there."

More specifically, it's Epidemic keratoconjunctivitis, or EKC for short, which means I am basically practically a honorary doctor now.

So while I'm very happy I won't be spending the rest of the week in the hospital, this still isn't the greatest of news, because there's literally nothing they can do for EKC, and it can last for several more weeks. I'm to stop all medications (including the super-rare antibiotic/steroid combo drops Jason went to four different pharmacies in search of last night) and focus all my energy on the fact that I am contagious as fuck and will be for quite some time. I go back for another check next week.

We were supposed to cut down our Christmas tree this past weekend. Definitely did not happen. Jason took the boys to see Santa while I languished in the ER for the second time in a week because I now had allergic conjunctivitis on top of the keratoconjunctivitis, like some kind of disgusting parfait of pinkeye. I haven't done a single clever pose with The Damn Elf and poor Ezra filled their advent boxes with candy himself because I got exhausted after the first few. The house is a DISASTER and I haven't done any shopping.

This was not how I pictured our first holiday season here.

After my appointment today, Ike asked if I was feeling better yet. I told him a little, yes.

"Can we go get our Christmas tree now?" he pleaded. "Today? Tonight?"

Probably not quite yet, dude. But soon. I'll be better soon. 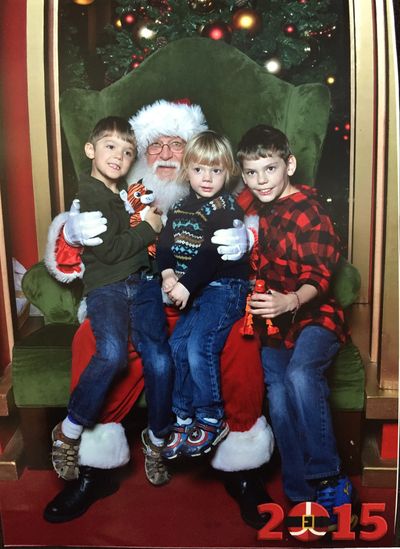 (Prob just gonna send Jason to buy a tree from a parking lot. Christmas 2015 is shaping up to be a bit of a wash.)

Oh, Amy! Feel better soon! All your pics of this have looked just awful.

If I didn't live in Canada, I'd bring you a big box of groceries and treats. I'm so sorry this has happened to you.

Christmas tress from parking lots can be fun and exciting, too. Send Jason. Go easy on yourself. Hope this thing goes away as fast as fast can be!

That sounds terrible! Get a lot of rest and take care of yourself. I hope you start feeling better soon!

Cheer up - you have time on your side. Christmas is not for @.5 weeks- even viruses get tired of hanging around and I am sure it will be gone by then!

We never get the tree till the week before XMAS and leave it up til New Years (that how I was raised and I have to say, I have never really understood having a tree for a month before the big day - kind of looses its "magic?"). Maybe you can hold off on the tree til you are ready to go with them to pick one out and then just say that was the plan all along!

Amy ..I been a lurker since you just had One little guy! ..cannot remember how I started lurking but one of the first post I remember I think Noah was sick at the beach you threw up pink! …I have lived and raised my Children in EC since 1982, and I one of the best freshest tree places is the parking lot on RT. 40 in from of Wolf/Gardners Funiture Store. The trees come from a local tree farm. Sending the pinkest wishest!

Take care of yourself. Hope you feel much better soon. How awful. Do your Christmas shopping online and sign up for Peapod, which I think they have in your area....groceries delivered to your door from Giant. And I think they have a special now for new customers.....$20 off your first order and no delivery fee for 60 days! You don't need any more germs!

Amy I am so sorry :( I hope you are feeling better! I had bronchitis last year throughout the entire holiday season and it was such a bummer. Thank God for understanding husbands and children :) merry Christmas! Feel better soon!

What they all said. Take care of yourself and let Jason take care of Christmas.

Haven't seen any of you guys since Emily and Mark's 4th of July party several years ago.

Still, just want to say that, whatever happens this Christmas, it's going to be a fabulous chapter in your memoir! So, don't forget to take notes!

UGH how miserable! All the "get betters" are being sent your way.
Meanwhile: 1) amazon prime; 2) the trees from a parking lot are totally legit (that's what I tell myself); 3) HOLY CRAP your kids are getting, like, all long-legged, and old-looking. Let's all ignore that and move along.

Well, you WILL get better. So glad it's not cellulitis. Sorry you have been going through this but Christmas is still a few weeks away. I have confidence that it will be awesome!

Well, you WILL get better. So glad it's not cellulitis. Sorry you have been going through this but Christmas is still a few weeks away. I have confidence that it will be awesome!

Agree with the above. Amazon Prime and parking lot Christmas trees are the way to go some years. I hosted my family party three years ago with what turned out to be pneumonia, feeling like total shit for the week before, during, and after. Totally was wiped out for Christmas and a few weeks after. Point? Rest now, do what you can do, and realize Christmas will still be awesome.
P.S, When did your boys blow up into young men?!

I had an Easter like that. Eggs were all hidden in one room in the basement that was reasonably clean. Luckily we got a few good pictures and that's all anyone remembers of it. That Santa picture will do the trick for Christmas 2015!

I have had that several times:( This is what helped me, my eye Dr. gave me some steroid eye drops for something else and I used them:)without permission, for the pinkeye, and it helped soo much. I developed an allergy to most of the antibiotics for pinkeye when we were passing it back and forth as a family one sad holiday season so I can't have those anymore, I developed scaly skin all around my eyes, like Saul/Paul in the Bible! It was horrible.

Lots and lots of sympathy and get wells from France too.

I had a chest infection last Christmas, and it was a bummer. Hopefully though you still have 2 weeks to get better before the holidays start for real?? Doesn't help with the present buying though. I second Amazon Prime : )

You want eyeballs or your dream Christmas? The boys would likely love riding along with Dad to find any tree to bring home.
You are shown to be a super online shopper with folks shipping fast for the gift of the business.
Snap out of repeating the doom again, please? Pretty please. You are fortunate by far as compared to my memories of the past holidays I had and so far this year I remained true to my streak of me and my dog.
Still, not whinig...stating my facts.
I will be blessed to have the photos and stories I believe you will post of the mad skills of you. The picture perfect Christmas morning for me from you....please refrain from any hairz brushed. You are much loved and your eyeballs loved too.

Christmas tree sales around here are run by local fire companies and Boy Scout troops. You could combine a good deed with an easy tree purchase!

If you call these guys, a fella in a Santa suit will bring you a christmas tree AND pulled pork sandwiches. Some friends of mine in Baltimore have done it a few times and it's a lot of fun. Not sure if they deliver to wherever you are, but if you call and explain your situation, they might make a special trip!

PORK n PINE!!!! That is the greatest. Hope your eyes feel better soon, Amy. It sucks when you are excited about something and your health comes along and derails your plans.

I'm sorry you've had such a rough month so far - I've been checking in here regularly for updates and I'm at least glad there's an end in sight. Also, I want you to know that "disgusting parfait of pinkeye" is the the best sentence ever written in English.

Aw, I'm really sorry. That sucks. I recall the year when I had such a horrible ongoing asthma attack that left me unable to do much of anything. At least my kids were grown by then. It's so much harder when they are little. Hope you are on the mend soon.

You know you're in trouble when the eye doctors' receptionist greets you with "Oh My God!" Had my own EKC that ate Christmas three years ago. Hope you feel better soon.

You have 16 days until Christmas! You're going to feel better soon, and everything else is going to be great. If you have the funds for it, hire someone to straighten up and give your house a deep clean (while you hide in a bedroom that doesn't need it). I had a fake tree for all my childhood Christmases and hell if I didn't love the hell out of it. The kids will be thrilled no matter where they pick the tree from. <3

speaking of "wash" you many want to have an eyewash cup handy with your little sneezing tykes. Best wishes,

Wow, Noah is getting huge!

Also, feel better soon. As long as there are presents and a tree, it will be the best Xmas ever as far as kids are concerned.

Please rest and take care--I'm sure your wonderful husband will handle the rest.

It's like you're trapped in eyeball prison. I'm so sorry this is taking over everything. First Christmas in the Yellow House- so much good anticipated, such a huge letdown.

(On a less serious note, may I gently suggest that there is NOBODY more qualified than you are at this very moment to orchestrate an Elf Death Stare photo. Nobody.) (Iiiiis it too soon for a joke about the potential for such a photo to go viral. Yeah, too soon.)

You get nothing but sympathy for the pinkeye, because damn if that kind of illness isn't a full-time job in and of itself. But it seems that NOBODY ELSE HAS CAUGHT IT, and girl, you deserve all the cookies for that.
You are going to have many, many wonderful holidays in this new house. It's disappointing but totally okay to lowball this one.
All the hugs, all the support, sorry it sucks so bad right now.

Not the best start to christening a new home for Christmas, BUT, think of the story they'll tell about that first year, selfish Suzy! THE STORRRRRRRRRRRRRY.