The Pinkeye That Ate Sephora

Just a quick eye update, because I'm sure that's what's REALLY important this holiday season: Better. Finally, at long last, definitely better. I saw the specialist again on Tuesday and he was quite pleased, and things have steadily improved every day since. I have some small lesions on my corneas messing with my vision, so typing/writing/Wikipedia-wormholing is still rather unpleasant, but for the most part the virus seems to have finally finished it's thang.

Sadly, though, we're not out of the 8-10 day incubation period woods yet with the boys (who SO FAR seem to all be okay), so it'll be another week or so before we can officially declare the great Zombie Pinkeye Scourge of 2015 to be over and done with. Here's to NOT dragging this shit on into 2016. And being healthy enough to see Star Wars.

Also at my doctor's appointment, I was instructed to throw out any makeup and makeup brushes that I used or even possibly used on/around my eyes at any point in the past month, especially during the week before my symptoms started.

Internet, this is a damn tragedy. 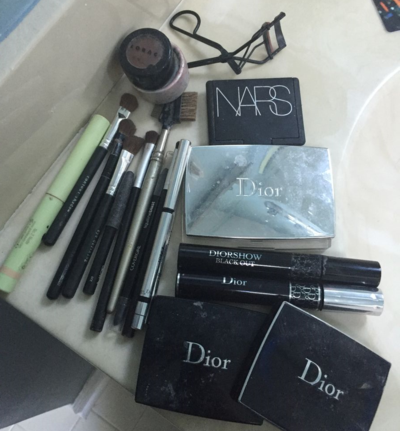 Especially since it really wasn't all that long ago that most of my makeup was lost to the Lipstick On A Cat Disaster, and I'd only recently finished rebuilding the stash with a few spaced-out splurges. I asked if I could at least sterilize the brushes and the doctor gave me this absolutely withering look before asking if that was REALLY a risk I felt like taking. Then he washed his hands for like the seventh time during my 15-minute appointment.

Hopefully Santa will bring a Sephora gift card or two. In the meantime I'm still rocking the natural look, which at least is about 99% less red/angry/gross/weepy/painful. Blessings officially counted, but dammit that one Dior eyeshadow palette was a LIMITED EDITION.

Oh. Oh no. That stash is certainly worth grieving over. I think a moment of silence might be appropriate here. Glad to hear you are on the mend, but that makeup though... Tragic. Sending you wishes for lots of gift cards and limited exclusion coupons!

Can't ya just spray it with Lysol or dip it in Purell?

But seriously I am sorry for your loss.

I'm sorry Amy. That is shitty. Just awful. I hope you get a BIG Sephora gift card in your stocking!

So sorry but yes, burn it all!

That is a god damn TRAGEDY. You have my deepest sympathies for your loss.

I'm very susceptible to pink eye and styes - though never this bad, I'm so sorry, yuck. But as a result, I have to replace eye make up quite frequently, I feel your pain. I've taken to living off samples and travel sized anything I can find, it hurts less to toss them. A Birchbox or Ipsy subscription for a few months after a breakout helps considerably in a rebuilding period too.

Pouring out a little eye makeup remover for you over here for your loss. F*ing tragic.

I *highly* recommend Urban Decay's eyeliners as you renew your stash. And CoastalScents.com has great brush sets and shadow pallletes at extremely reasonable prices.

When life gives you mutant pink eye, use it as an excuse to TREAT YO SELF. Sorry, that's all I got. Still f*ing tragic.

Agree w/JulesInNC - f*ing tragic. But also - I think you might just possibly deserve to treat yo self. My opinion. (*ahem* nudge nudge JASON)

That SUCKS. I'm so sorry.

I have been reading and enjoying your blog for years. A loooong time ago, I contacted you to say that this has been like a good book, and I pay plenty for books, so why wouldn't I send a little something your way? You so sincerely didn't want to give me information about how to gift you, but very reluctantly answered my request.

Then I did nothing.

But here it is! A perfect opportunity to make it right! For all the hours of diversion and entertainment, where do I send a gift card so you can replace some of your makeup supplies? It won't be as much as you are worth, not by a long shot, but it would make me happy to help out a little and say thank you for your blog.

NO!!!!! That is truly awful! Almost as bad as your terrible pink eye! I just recently bought a Nars eye shadow, and that shit is expensive! I also have a slowly accumulated eye makeup/brush collection, and I would be very upset if I had to throw it all out. I'm sooooo sorry!!!

Oh that would DESTROY ME. My deepest sympathies at your horrible loss.

I'm sorry for your loss. You know... maybe you can go to Sephora, show them your pictures and say you got it from their make up counter. Threaten to sue (or give the plague to them) and the store will be yours! Just kidding... But I hope Santa stops by Sephora on his way to your house this year!

On the bright side, Urban Decay Naked 2 eyeshadow palette! Stila mushroom eyeliner! Stila eyebrow pencil in ! New brushes (I like the highest end ones at Target) and to top it all off, CoverGirl Lash Blast mascara! Maybe you can give us a nice little vlog post trying your new products and convince Sephora that the publicity is worth a little something.

OMG! Sucks. The only good thing is that there are still really good holiday sets out there right now, right? And you should get a NARS pro palette out of this. That thing is amazing. Truly.

Having to throw all of that out sucks great big donkey balls BUT preventing zombie pinkeye again is a MUST! Be sure that you've thrown it all out! Amy, BE VERY SURE!

Seriously sucks that you have to toss all that makeup. BUT! You do not want to re-infect your eyes. I am so glad that you are finally feeling better and your eyes are clearing.

Oh, honey. That is a serious tragedy. I think it's time to Treat Yo'self Late 2015 in terms of an ipsy or similar subscription as WELL as to a Sephora/Ulta visit. I had a horrific pink-eye thing and had to 86 some of my ipsy goodies, but I was phlegmatic about it because more was going to arrive in a couple of weeks.

You could probably spray the LE palette with isopropyl alcohol without ruining it. (If you ever accidentally smash a palette you can smush it back together with IPA, protip) Ditch the brushes though. You could probably also stick the palette somewhere for a couple of months and hope all the viruses die of old age.

Okay, that sucks. It's bad enough you're battling some mutant strain of pink eye but then you have to throw out your stash? Not fair. Let's just hope the boys stay clear of it so you can have a happy and goopy eyed free holiday!

I had pinkeye in college and reinfected myself because I was sure I hadn't used a particular shadow. So I feel your pain. Try Givenchy Noir Couture mascara. I gave up years of being a Diorshow addict when I discovered it.