Star Wars is a deeply special thing for our nerdtastic family, going all the way back to my very first date with Jason. We love it. Insane for it. Get a case of the warm and fuzzies just from thinking about it. Despite having our young hearts broken by the prequels, being able to introduce our children to the original trilogy brought back the love and magic big time, every time. 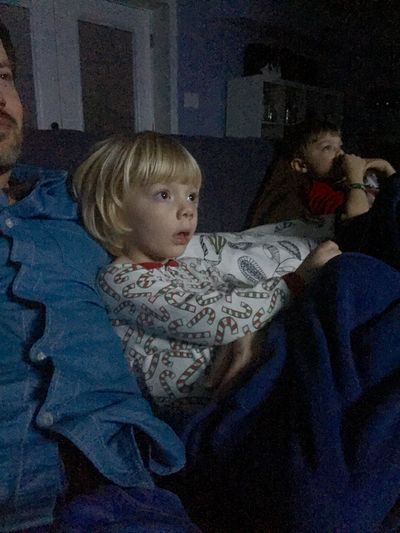 (Ike, watching Empire Strikes Back for the first time last weekend. I've never seen him so blown away by a movie. When it was over, we said SCREW BEDTIME IT'S JEDITIME and let everybody stay up past midnight.)

So there was no way -- NO WAY -- I was going to let my stupid-ass eyes (stupid ass-eyes?) stop me from attending the early Saturday morning showing of Force Awakens we'd bought tickets for ages ago. I was 99.9% sure I was no longer contagious (no red/pink, drainage, swelling, just the residual blurred vision but even that's markedly improving every day) but took all the proper washing/sanitation precautions and was extra mindful about keeping anything from touching my eyes.

And it was wonderful. Just...all the wonderful things. I laughed, I gasped, I clapped, I cried, I caught each tear with an individual tissue which I then placed inside a plastic bag before re-applying hand sanitizer.

(Brief "is Force Awakens appropriate for children" sidenote: Depends. If your kids watch the originals, I'd say the intensity [both violence and emotional gut-punches) is on par with those. There was one moment that brought on some full-on ugly crying from Noah and Ezra, while Ike took it more in stride, or just didn't fully grok to what was happening. BB-8 is a goddamn DELIGHT and Rey is the most bad-ass female character/role model this side of Fury Road and I know MY five-year-old self would have gone insane for her. But still. There's like, war and blasting and death. It really depends on your kids.)

And then Ezra projectile vomited all over the theater lobby as we left.

By early on Sunday, he was up and perky and scarfing down pancakes. We gave him a full 24 hours before deciding to risk it and go run some errands, grab some pizza, then impulse-buy-tickets-to-the-one-non-sold-out-showing of Force Awakens because apparently the ONLY TIME we are Fun Parents is when it lines up with our own selfish Star Wars interests.

(Officially, we justified the repeat showing because the kids REALLY loved it but kept asking a million questions, but really it was because I overestimated the preview time, got stuck in the concessions line, received a text from Jason that IT'S STARTING!!!, abandoned my drink order, full-on SPRINTED back to the theater...and missed the opening crawl. So OBVIOUSLY, we needed to see it again to make up for this egregious injustice.)

And so we prepped the boys on the importance of NOT SPOILING the movie for anybody else in the theater and watched it again. And it was just as delightful and fun right up until the closing credits started, which is when Ike yakked up his popcorn all over the aisle.

Sigh. I'm sorry, America. We kept them all home after that. 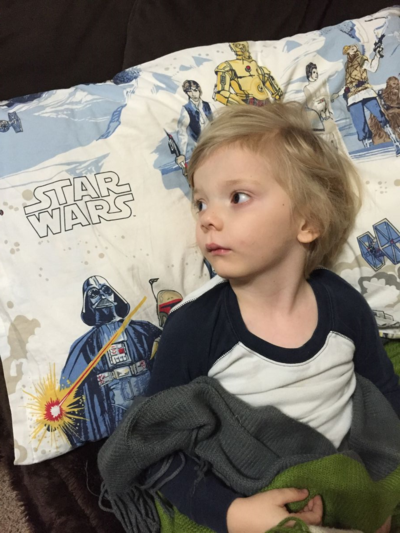 (Still in the thick of it, having a sleepover on the couch with on-bucket-duty Mom, watching a lot of Bob's Burgers. Also not the most appropriate choice but it's BEEN A BAD MONTH YOU GUYS. I JUST CANNOT HANDLE THE FUCKING BUBBLE GUPPIES RIGHT NOW.) 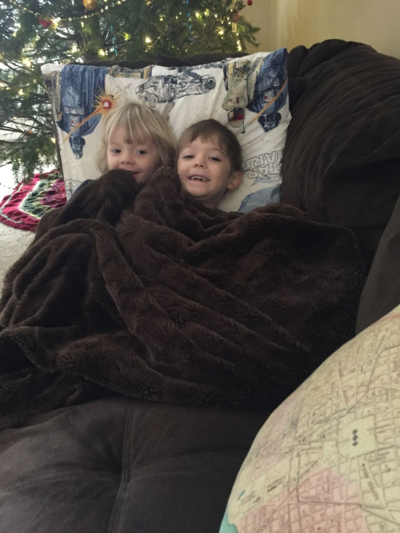 (Much improved the next day, clearly excited that they managed to scam a day off from school without having to miss a single important second of Star Wars, TWICE.)

(Those are my boys! Way to time that virus. Good hustle.)

Woman, I love you. And your kiddos.

The Bubble Guppies are my hell... have you tried Miles from Tommorrowland? I feel like it's the least offensive theme song.

Yes! Star Wars fans ourselves. Loved every minute of this new one!

We've got the same brand of ick starting it's nasty way through the house...May the force (of antiseptic cleansers) be with you.

So glad everyone is feeling better. We plan to see TFA Christmas Day. I've seen one spoiler and was not happy about it, so I am avoiding reading anything else!

I love your family.

Oh man. Glad you were able to go see Star Wars (twice! no less!) but so sorry for the plague upon you. Hope everyone is feeling worlds better now.

We saw it twice this weekend, too, the second time being an impulse purchase as well, which meant we had the one-year-old with us and had to take turns taking her out because she would NOT cooperate. So I think I need to see it again. And again. Maybe by May 2017 all three of my kids will be able to sit through it!

Fucking Bubble Guppies. NO. That shit has been banned from my house because I. Just. Can. Not. It drives me insane. (I don't really know why. It is just annoying.)

Oh no - we just had the stomach bug (moslty recovered in time for Star Wars opening night). I actually let my 10 yr old watch "kitchen nightmares" unedited while he was home from school. At least it was educational. He now know how to curse someone out - something he wouldn't learn at home:)

This all just made me smile so big. Your family is happiness personified!

Thank you. Hubby and I have been debating on and off about letting our 4 1/2 year old watch it or not. She's seen the original trilogy and is obsessed. I think we'll wait until the hub-bub has died down so we can go to a sparsely attended showing and allow her to ask all the questions she needs to ask and maybe walk out a time or two without causing too much angst to fellow theater-goers. But HECK YES to Rey.

My husband and BIL took our kids to see the new Star Wars at the Thursday opening night show at 7 pm - which meant they were up waaay too late that night, filled with sugar and excitement. For crazy reasons I don't understand, the tickets were the regular Thursday night in a small town price of $4, so about half the elementary school was there that night (somehow no
one from out of town seems to have caught on - they didn't sell out until that afternoon). The next day was the last day of school before spring break. I feel so sorry for those teachers that Friday - it must have been typical day before break times are at least 10.

We took our 5 & 7 year old on Saturday after noon. So awesome. It was a 3D viewing, which was a first for all of us. Well actually taking the kids to a movie was a first.. We need to see it again. Daughter had to pee just before a major scene started, and when we got back, I happened to be crouching right in front of my husband when oh-my-god-what-just-happened, happened. Major wife fail.we will be owning this movie for several repeat viewings. Episodes 1-3 are like videos of a high school play( except I love Ewan MacGregor, so that helps...)

THANK YOU FOR TEACHING THEM ABOUT SPOILERS! I had the movie spoiled for me LITERALLY SECONDS before it started because some kids were very loudly asking their parents "why did X happen" right outside of our movie.

Am I the worst person in the world because when you said he projectile vomited all over the theater lobby my first thought was, "well, good thing it wasn't in your car and someone else can clean it up!"...?

We will not be taking our kids to see it as my 7 yo loses his shit on certain episodes of Wild Kratts (there's some evil lady who makes handbags out of fish?) yet we discovered Mythbusters on Hulu and I can bribe them to do ANYTHING by dangling the carrot of letting htem watch another episode.