Home Archives About Subscribe Advice Smackdown Tip Jar
Yes, There Is Even An App For THAT
The Great Purge

Okay! Back to our regularly scheduled programming, where curse words are allowed and no discounts are offered.

So Max. It's his kidneys. Not exactly a shock, but the...good? semi-good? not-horrifically-bad?...news is that his numbers currently point to only "moderate" kidney failure, meaning not any sort of imminent death sentence, and it's worth trying some diet and low-level interventions. We picked up some prescription low-protein food at the vet (and donated nearly all of the cans and kibble we had on hand to the vet's pet shelter charity pile), and will be injecting him with fluids about three times a week.

I was worried he'd reject the special food and we'd end up mixing it with something else, thus reducing the effects, but the minute I opened a can and smelled how totally freaking gross it is, I knew it wouldn't be a problem. Anything that smells like rotten fish and dog farts is Max's jam, and he's already devoured several full cans of it. He even let me mix in some fresh pumpkin for further de-constipating efforts, which he's never, ever done before. THAT'S how pungently disgusting this food is.

He's only had one fluid injection, and I know it's easy to see what you want to see, but I SWEAR he already seems...happier. A bit peppier and moving around like he's more comfortable. The shot wasn't his favorite thing and he certainly voiced his displeasure in his distinctive Siamese way ("GRRRRRR YOWWWWL WTF MAN?"), but once it was done he didn't really seem all that bothered. So. We'll stick with this plan for however long this plan seems to help, and I'm admittedly very sorry I didn't sack up and get his bloodwork re-done earlier. I was scared to know, I guess. Now we do, and it's a good thing.

(BROUGHT TO YOU FROM THE DEPARTMENT OF "NO DUH, AMY.")

Ceiba's medicine also seems to be helping her cough, although I cannot seem to administer it without singing the tune to "London Bridge Is Falling Down" but with the words "trach-eas are co-laps-sing, my fair Cei-ba!"

She is not amused. No one else in the house is amused. I am SUPER amused.

Speaking of getting to the bottom of medical mysteries, remember that weekend my kids barfed in All The Movie Theaters? At first I was amazed and a little self-congratulatory that the stomach bug didn't spread to anyone else in the house.

(Likewise we are officially out of the incubation period woods on the Epidemic Keratoconjuntivitis aka Zombie Pinkeye, so GO GO GADGET DECONTAMINATION POWERS.)

Yesterday I decided to tackle Ezra's literal hellhole of a bedroom, cleaning and decluttering from top to bottom, rearrange the furniture, etc. I came across this, hidden under his bed: 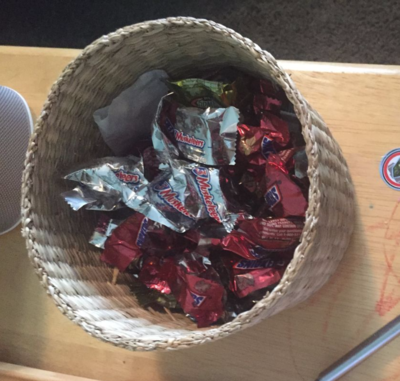 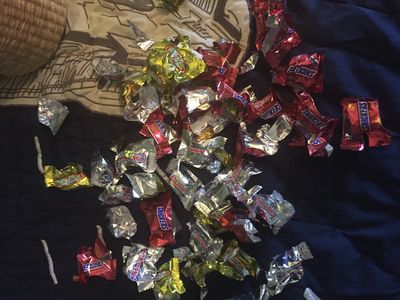 Dozens and dozens of candy bar wrappers, of the same leftover-Halloween variety we've had in a big bowl downstairs, which I'd mistakenly assumed the kids were more or less ignoring.

(And since everything else about this post is already completely gross, let me elaborate and explain that the wrappers were carefully hidden under a wadded mass of toilet paper that was...stained. With something. My best guess is chocolate-tinged spit-up BUT having landed on the wrong side of the "is that chocolate or poop?" FAR TOO MANY TIMES, I've learned some stains are just best left un-examined.)

When I questioned Ezra about them, he claimed total ignorance. Likewise Ike had zero knowledge of this gluttonous horde. Obvious lies were obvious, and with a bit more pressure they both turned Judas and placed the blame on each other, before FINALLY admitting that the Great Candy Glurge had been a joint effort, and yes, they'd swiped and eaten all that candy in one single night.

One single, gloriously epic night. A long time ago, in a galaxy far far away. The night before we saw Star Wars, to be exact.  Right before we spent two days in a row stuffing them with basically nothing but pizza and movie theater popcorn because WE CAN BE FUN TOO, DAMMIT. Ezra's stomach cried uncle first, while I guess Ike held on a little longer (or else repeated a solo candy heist the next night).

Either way, it explains A LOT, including why the special candy treats I've been packing in their Friday lunches have been coming home unopened. 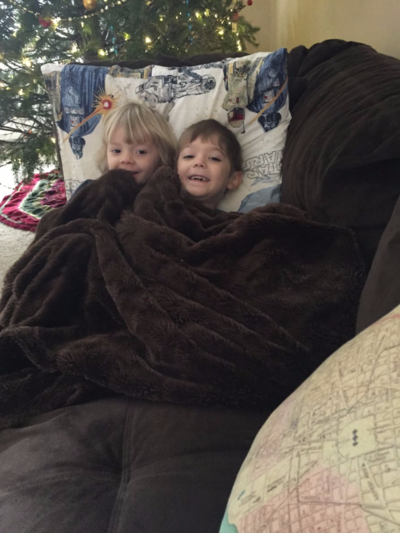 Hide yo candy, hide yo wives, I can't believe I let these two criminal masterminds stay home from school God I am such a sucker.

How did you get them to confess? How, how, HOW? I have never gotten my little pathological liar to 'fess up about anything to me, although she did confess to our elf once in a note that I found hidden (which was totally priceless).

@Amy I was a big ol' cliche and threatened to take away TV, movie nights, tablets and the Xbox for two weeks. Their choice was either lose one cartoon that night for the candy, or two weeks of zero screens for lying about it. Note that this was the first time that has ever worked, and I don't believe they learned a damn thing and are probably still lying about SOME aspect of this story.

I can super-duper relate with the child part of this story. There was no barfing thankfully, but hidden wrappers? Check. Tag-team sneakery? Check. Hell, I too have mistaken poop for chocolate TOO MANY TIMES. Before becoming a parent, I did not think this would be a thing, but there you have it.

We have a Siamese-ish (not purebred) cat recently diagnosed with slightly bad kidney numbers (kidney damage from an infection but not kidney failure). She refused to eat that special food. We tried mixing it, but she kept not eating it. She would eat it if you mixed it into regular food in a one to four ratio, but at that point, there's barely any special food in there. The fluids they said to do twice a week of possible, but it takes three people to hold her down and she makes noises like we're torturing her. The older veteran vet at our practice said her numbers aren't that bad, and the cat is super-energetic, so I kind of think the other vet's recommendations are overkill. We're doing the best we can with the fluids but have pretty much given up on food (she was so skinny I just wanted her to eat something).

So glad that Max appears to be responding well! I've been worried about him (because worrying about a cat you only know via a blog is totally normal, right? Right).

I love that their Friday candy is untouched. It's like the teenagers who get super sick on strawberry wine and then can't drink anything until their 30.

I started laughing the second I saw the picture of the wrappers. Oh man. At what age is it going to be too scary to even go in their rooms? Ten years old and I already shudder at some of the stuff I find in there...

Also, I like prescribing powdered Miralax for kitties with pooping issues along with the pumpkin. Maybe you've already tried it-just thought I'd mention it. :)

A tip for the fluids: my husband wrapped our squirmerella cat in a blanket keeping her legs immobilized MUCH better than just holding her alone. Also, we all got used to it and it got much easier after the first week or so. Best of luck!

I am not surprised that's they're done with the candy for a while. My favorite candy was Skittles until my 9th birthday when I ate way too many and threw up. I still can't eat Skittles and I'm about to turn 35.

But, they are both so damn cute! So at least there is that. That is all I have. Lol

I did another treatment myself two hours ago and WHEW! I don't know if it's harder on her or on me. I *promise* that the eating and the happiness and the regular pooping will commence/continue. I'm *so* happy with this news! :-)

We have a cat who was diagnosed with the same kidney issues, and was a bag of bones when she was diagnosed. She's since gained about a pound back (on a very small cat) and has been getting fluids for 16 months still going strong. Just one thing to consider, our vet warned us that our other cat could get issues if she ate the special kidney food. I don't know if that applies to dogs, but given Ceiba's predeliction to eating cat food, you might want to watch her.

I am NOT a person to post links to my blog in the comments section but holy halloween candy, we are living parallel lives: http://ofgoodfamily.com/2015/12/17/trickery/

That.is.hilarious! I keep the candy up high because I would go to give out gummies and only find empty boxes. Luckily, no evidence of climbing...but I am sure the little one (4 years) would bribe the 10 year old.

I am sorry..i should not laugh..but the pirate raid on the chocolates is pure awesomeness..

Two of our cats had kidney failure, and we found warming the sub-Q bag beforehand made the kitties much happier. We filled a gallon ziploc bag with water (about 3/4 full), nuked it in the microwave, then set the sub-Q bag on top of the warmed water for five minutes or so.