So I get that Valentine's Day is a cheesy, unnecessary holiday birthed from crass marketing and consumerism, and it's cool to be all, "whatever, we don't do anything for Valentine's Day because we don't celebrate Hallmark Holidays blah yadda blah."

But I married a romantic with a penchant for big gestures and special occasions. Not doing anything for Valentine's Day goes against his very DNA. So we celebrate Valentine's Day, but to prove that we're not complete lemmings, we don't celebrate it specifically ON Valentine's day. This year we went with February 13th. Yeah, that'll show 'em! Stick it to the man!

(On Valentine's Day Proper we took the boys to see Kung Fu Panda 3, which wasn't technically terrible or anything, but I feel like the storytelling possibilities and overall concept of a kung fu fighting panda have officially run the full course and it is time to move on.)

On Saturday, Jason woke me up with the news that he'd booked me a surprise massage appointment, because he is amazing and also loves to ignore our "no gifts this year, right?" agreement every single time. Probably just to make me look bad. 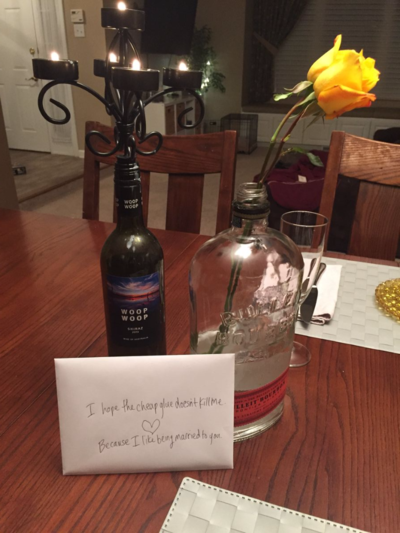 (I got him a card and made a morbid Seinfeld joke on the envelope.)

(I did write something sweet and loving on the inside, which is an improvement over last year, when I mostly just drew dicks and boobs.)

(He did the yellow roses in the empty bourbon bottle though, so I think you see why our marriage works so well.)

(And while I'm stuck in a parentheses loop, absolutely have to give a shoutiest of shout-outs to Will Coleman at Premier Touch Therapeutic Massage in Columbia for the greatest massage of my entire life. In 90 minutes he worked out a decade's worth of neck and shoulder tension, and days later, I still feel fantastic. As an anxious person and chronic shoulder-huncher, I completely forgot what it was like to have shoulder muscles that aren't riddled with knots. Genuinely amazing.)

While I spent the rest of the afternoon flapping my arms and rolling my neck around in rapt wonderment at how GOOD everything felt, Jason entered the kitchen around 3 p.m. and did not leave until the boys were fed an early dinner and bundled off to bed. 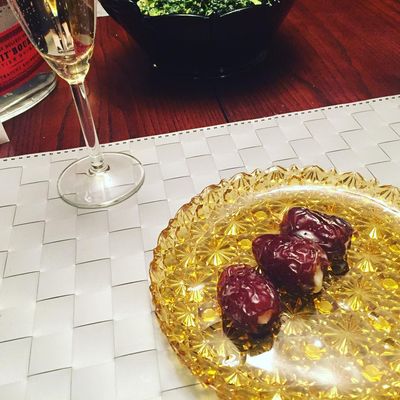 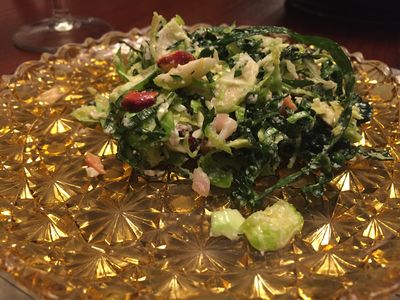 Kale and shaved Brussels sprouts salad with almonds, aka the most delicious salad I have ever eaten. 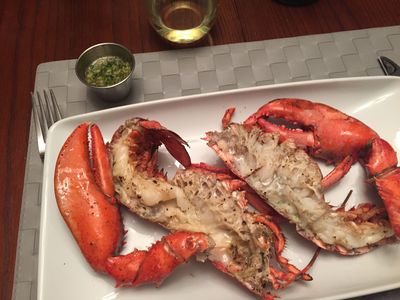 Jason pulled one of the live lobsters out of a bag to show the boys (who were eating leftover pizza from UNO's, like a pack of real gourmands), which...yeah. Little distressing, and Noah in particular seemed to regard us with a level of horror and baffled disgust reserved for serial killers. But we have always tried to be super honest with them about food and where it comes from, including the fact that yes, that pepperoni you're eating didn't grow fully formed from a pepperoni tree. Noah then pledged to become a vegetarian for about a minute and a half, during which I pledged to support that decision and rattled off a few of the menu substitutions he'd need to be okay with (i.e. ACTUAL VEGETABLES) in order to stay healthy.

"Well," he capitulated, "maybe when I'm a grown-up. Grown-ups like that stuff better than kids anyway."

They finished their (meat-topped) pizza and left to go watch a movie, during which the lobster slaughter occurred (Jason followed all the steps/advice he could find to ensure it happened as humanely as possible, but it was still pretty weird), and they've never brought it up again since. Fingers crossed they don't go into the freezer in search of nuggets and find the bag of lobster shells and carcasses I've hidden in there so we can make lobster stock.

Jason's dessert attempt (caramel pot du creme) did not work out, unfortunately, but it really was okay because I was SO STUFFED at that point and just all around glowing with happiness.

I really did marry a good one. He's my lobster!

We celebrated Valentine's Day last Monday with sushi out! I am one who would rather have you show me how much you love me the other 364 days a year. Yep, bring me chocolate 364 days a year and i'ma happy camper!

And here all I thought you'd get was a mirror repair bill paid! Hehe, sweet guy!

I'm a fan of the practical gifting kind. We went out to dinner to celebrate our homeownerversary on the 13th and then he did our taxes for us on the 14th. *Swoon* I love a man with a head for numbers and a heart full of kind gestures.

Was I the only one hoping this would be a reminiscence of "Amy's Dinner with Scalia?" ;-)

Thank you for throwing in hat Friends reference! :-)

Better not throw "your lobster" in a pot of boiling water, cause he's a keeper.

I'm getting a biggie this year - a new car! Well, a new to us car, sold on the cheap by a friend of ours, but it's a 2000 instead of a '97, and it has working air-conditioning and about 80K miles less on it, so I'm happy. It was 81 degrees here (CA) today, and no working air conditioning in a minivan with one semi-working window is not going to cut it.

I've been dying to know what the dressing on the salad was since it popped up on Instagram. Please share!

hurrah for being honest about where food comes from. I'm no longer a vegetarian for a lot of reasons, but I do think it's really important to be real with ourselves and with children too about these facts, and not in denial. Sounds like you handled it really well!