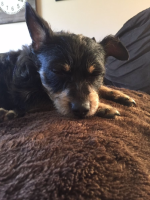 So I casssssssually mentioned in Monday's post that Beau is a runner. That was...ever-so-slightly understating the situation by like, fourteen million words. His foster mom warned us about it: Keep him on the leash at all times outside, even within the fence. Don't open car doors until you've got a firm grip on it. Watch him around doors in the house, because he can bolt out like a flash. And the more you chase him, the faster and farther he'll go, because YAYAYAY THIS GAME IS FUN LET'S KEEP RUNNING FOREVER. Both Jason and I had dogs just like that growing up, so we assured her we understood the behavior and would be very, very careful. And we'd thoroughly explain the situation and need for caution around opening doors to the boys. Yeah that's going GREAT. On Friday night we went out for a quick dinner. I put Beau in his crate and went outside to the car. Noah was still inside, trying to track down a full selection of screens and chargers and whatnot, and suddenly I looked up and Beau -- off leash, not yet tagged or chipped -- went shooting out of the garage and over to... Read more → 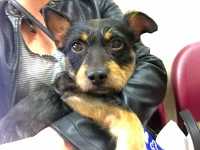 We put Max down just a few hours after I published Friday's post. It was a horrible, scrambling-type decision, but Max was no longer declining by the day. He was fading by the hour. The at-home vet squeezed us into her already fully-booked day and said she'd be there as soon as possible. Jason spent a quiet hour one-on-one with Max saying goodbye (Max was always extra-ultra-special to him), then loaded the kids and Beau up in the car and drove them to a playground. Unlike our final pleasant days with Ceiba, the boys had almost zero notice or time to process this loss. They knew Max was sick and probably wouldn't be around much longer, but it was awful to tell them that "not much longer" was basically boiling down to "15 minutes, please give him a kiss and then put on your shoes." I was the only one holding him when he passed. I sobbed into his head, handed his tiny shell over to the vet, and then sat alone in the house until all my boys came home, completely numb with shock and grief. Ceiba at least had a "HEY STOP THAT" reaction to the initial sedative... Read more → 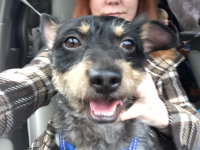 So this is Beau. He is a three-year-old super-mutt, technically declared a mix of Miniature Schnauzer and Yorkshire Terrier, but definitely has some wire-haired Dachshund in him as well. Possibly some Jack Russell or other assorted terrier breeds. Also, Ewok. We don't know that much about his background. He was surrendered to a rural-ish shelter by an owner who could no longer care for him, but volunteered that he came from a home with multiple kids, cats and dogs and got along well with all of them. No evidence of abuse, but he was underweight, lacking vet records, and was shaky on both house and leash training. A local rescue group took him in a few weeks ago and he's absolutely flourished in foster care. Healthy, well-socialized, and cute as all hell. He knows a pretty good number of commands (sit, stay, come, drop it, get down, no, etc.) so he had some training, once upon a time. The rescue's best guess is that he had owners with the best of intentions who simply got overwhelmed with too many animals. (Beau wasn't their only surrender.) Beau is his original name...his foster mom tried calling him something different but he wouldn't... Read more →