Some Run-On Sentences About Our Weekend

Wow, what a completely boring, uneventful weekend we just had. Amazing how much life calms down once all your pets stop dying.

Jason's company threw a party at an Orioles game; I did not attend, even though I am once again technically working part time for his company (yay me! yay money!). He sent me photos of the open bar while I stayed home and sent photos of the calzones I made for dinner. 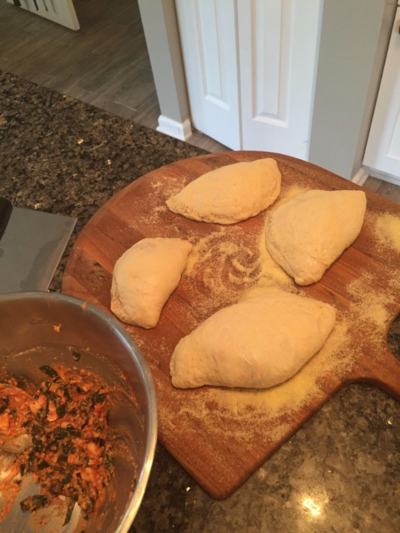 These were mushroom and collard greens calzones, which my children actually honestly ate with so much enthusiasm you'd think we were in a Totino's Pizza Roll commercial. Calzones just might be the new stupid tiny buns.

Later, I sat uselessly by for the accidental malicious destruction of one of the 45 million stupid asshole Minion toys the boys seem to have accumulated... 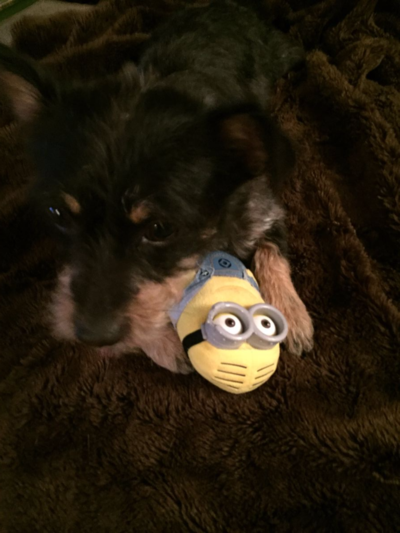 ...only for Jason to arrive home with some instant karma he'd bought the kids at the ballpark. 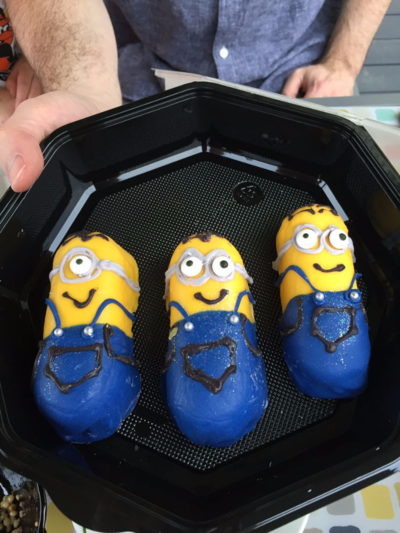 Just look at those fucking things. I've never been so consumed with the simultaneous urge to shove something in my mouth while also wanting to see what would happen if I just hurled it at the wall instead.

(We realized none of the boys had ever tasted a Twinkie before these montrosities. Of course they went batshit over them and my calzone victory was quickly and swiftly forgotten.)

On Saturday we took the boys to a Spring festival downtown for even more questionable food choices. We also brought Beau. Here he is patiently waiting for Ike to drop his third slice of pizza on the ground. 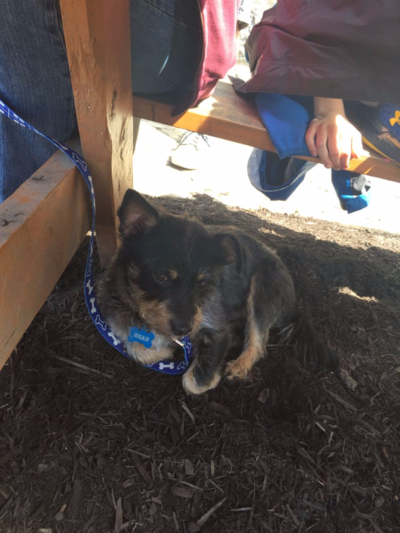 Things we learned on this outing:

1) Beau is beautifully behaved in crowds and around children and other dogs, even other dogs who repeatedly try to hump his head.

2) There is something about Beau that makes random strangers literally squee at the sight of him. (I think it's his ears, or his face, or the fact that he's basically just Peak Cute Mutt Dog overall). And everybody wants to pet him and hear his adoption story, so like, give yourself an extra 15 minutes to get from Point A to Point B.

(I actually already had experience with item 2 after I took him to PetSmart one time. I went in for two things and was there for almost a full hour fielding petting/rescue backstory requests from shoppers and employees alike, including one pet food representative who ended up hugging me in the middle of the kibble aisle after hearing about Ceiba and Max. Then she pulled out a photo of her dead Min Pin and started crying really hard and anyway, long story short, I mostly just buy dog food on Amazon now.) 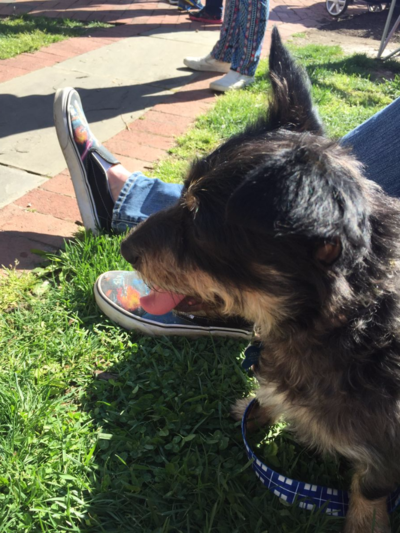 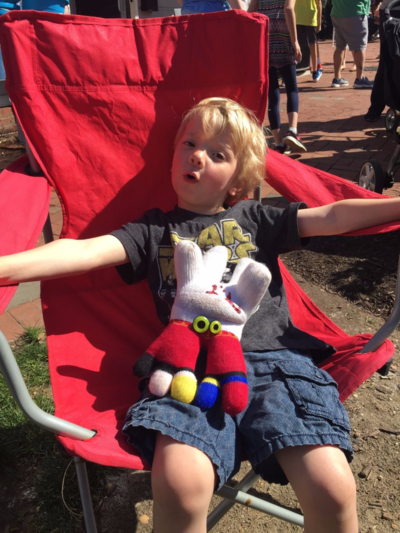 And here is Ike, his trusty sock zombie, and a chair that is not ours.

Not pictured: the toilet paper roll bird feeder he made and was INCREDIBLY proud of, but then dropped at some point and left it behind. Much upset, many tears. So a remake is going to be our afternoon activity today.

Luckily I also order big-ass bags of bird seed on Amazon too, because we inherited a bird feeder and I'm weirdly compelled to keep filling it. But it empties out constantly and now I have a million asshole birds to feed and they are all very pretty but not very smart and tend to fly into our front windows a lot. Anyway, long story short, I think adding a second bird feeder made out of a toilet paper roll in our front yard is really going to class up the joint.

On top of all of the other reasons why Beau is adorable, he also kind of looks like puppy. He has a puppy face. So youthful!

An I felt crappie all weekend here, so your sounded so much better. Birds feeders will be the death of me. We have 5, 2 hummingbird feeders and 5 bird baths. The baths and hummer feeders are the only ones I keep constantly full. Birds and squirrels knock the seed out on 5he ground, so I figure that's where they want it and they don't get more tulips what's on the ground is gone! Yeah, Imma bitch like that!

"Some seriously fabulous background pants" might be the funniest thing I've ever read.

I live in Alaska so no ballparks handy. I just wrote my brother and requested he check the San Diego one for Minion Twinkies. If he can't find them I may be forced to create some.

I used to have birds flying into my windows and breaking their little necks until I moved my bird feeder to the other side of the yard. Now I can't enjoy watching them without standing up to see out the window but I don't have guilt crushing me either.

We have a dog that looks like a bigger less wiry haired Beau and we found her and EVERYONE asks what kind of dog she is and we constantly have to say we don't know because we found her and blah whole story blah and don't get me wrong I love talking about her, she is the greatest thing ever but it does make all our outings extra long. AND- I got a bird feeder for Valentines Day and the big ass bag of birdseed from Amazon (cherry flavored- I guess birds like their seed to smell like cherry cough medicine) and I am with you on the compulsion to keep it filled. I gave up after a while and only fill it once a week on Saturday so the birds can pick up the seeds they knock out of it during the week when I am at work. Yesterday I legit had to break up a bird fight in the yard. I heard a ton of tweeting, most bordering on aggressive, followed by serious flapping so I got up to look and there were asshole birds literally knocking other birds off the feeder! It was WWE Tweety out there!

I second the advice for window alert decals to keep the birds from flying into them--what's the point of having the feeder if you can't sit at the window and watch them. Also, the phrase "eats like a bird" is oxymoronic--they eat a lot!!

Also can use wrapping ribbon - the curling kind works best. Tie some strands together and attach them to the outside of your windows with suction cup hooks. You know, for REAL class.
I used to feed tons of seed, but as I live in a wooded area and the larger critters would come up at night to clear what was on the ground and then wreck general havoc and mayhem on my decks, I finally quit. One year I actually live-trapped 18 possums, 31 raccoons and one skunk in a month's time. It was after the skunk showed up in the trap that I decided that I am not a trapper after all. Fun in the woods!