At some point after Ike was born, I took a pretty big step back from the "blogosphere community." It was partly deliberate (newsflash: some people be crazy, or at least crazy exhausting, also I hate Twitter with the fire of All Of The Suns). But mostly I just didn't have the emotional or practical bandwidth for a ton of long-distance virtual friendships or conference hopping, and all the online gossip/cliquish-ness that occasionally plagues both. Too many kids and freelance gigs and loads of laundry to worry about imaginary Internet reputation points any more.

So while once upon a time, 99% of my friends were people I'd met via some Internet-related connection, I'd say the opposite is true these days. Most of my friends never heard of my blog until we've gotten to know each other and I have to awkwardly explain what it is that I "do." None of them give a shit about how many Instagram or Twitter followers I have/had, and as a result of this shift I like to think I do a better job of reaching out in person these days (rather than just posting shit on the blog/social media and letting life events dribble out that way). I had to learn how to be a not-shitty IRL friend, though I admit during that process meant I let a lot of blog-based friendships fade or flicker out completely.

Then last year I got a completely random, out-of-the-blue text from an old Internet friend -- someone I still had in my contacts but hadn't seen or spoken to in who knows how long -- that would change everything:

Be honest. How much money have YOU spent on that stupid Simpsons game?

And so, thanks to the embarrassing necessity that Facebook Connect is to free casual mobile games (that also offer in-app purchases, natch), Adam Heath Avitable and I became friends again. We are officially All Up in each other's day-to-day business, yet converse solely in gifs most of the time, and we've spoken on the phone in person exactly once (under terrible circumstances). And although he no longer plays The Simpsons Tapped Out believe me when I tell you he spent way, way more money than I have on that stupid game, but also he's a putz for not playing anymore because now I don't have enough friends to help me get all the stupid prizes in all the stupid holiday events. Goddammit, Adam.

He also came to my house this weekend. We spent Friday night watching Troop Beverly Hills until three in the morning, AS ONE DOES, WHEN ONE ROLLS LIKE US. On Saturday I got to see him completely destroy at a comedy show in Baltimore and then attempt (and fail) to talk my husband out of ordering a round of Clamato-based Bloody Marys for last call. 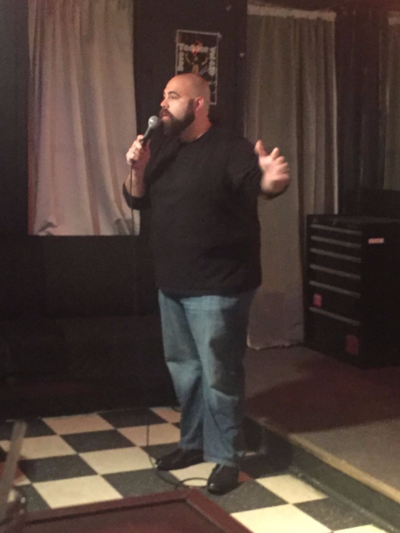 On Sunday he ran barefoot around our muddy yard with me, attempting to catch Beau during his latest escape attempt.

(We're recall/whistle training him AND installing an invisible fence. But in case those fail we've gotten pretty good results with one person following-not-chasing Beau all casual-like, while someone else grabs the car and a package of string cheese. First person hops in the car and starts tossing out string cheese until Beau finally decides he wants the whole thing and jumps in after it.) 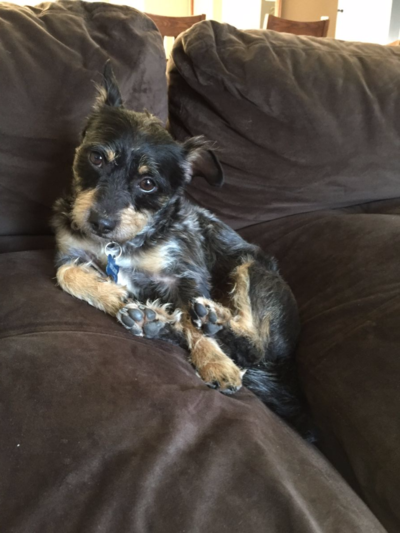 Adam brought Star Wars stuff and Play-Doh for the kids (who loved it and him), and Ezra was totally down with his fashion sense. 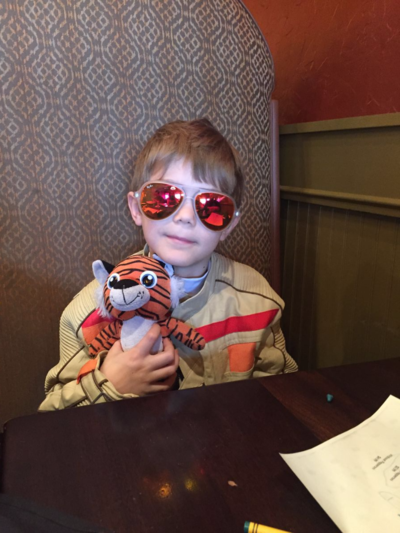 We explored exciting local destinations like "the Target" where he helped me pick out a birthday gift for a 5-year-old girl child, then openly and rightly mocked my repeated inability to select an appropriately-sized gift bag for it. We had a brush with danger when the McDonald's we ate lunch at caught fire a mere 16 hours after we left it.

And then last night he left and we went right back to giving each other shit and gifs and nonsense over text.

So it looks like I'll be attending (part of) Mom 2.0 this year, a conference I have never once attended. (I'd go to the whole thing but I gotz two different field trips to chaperone that week and sorry, Internet Things, you're still lower on the priority list than that.) AlphaMom is nominated for an IRIS award, along with so, so many familiar names and faces and some once-very-good old friends. (Not this ol' rust bucket of a blog, though, obviously.) I'm actually looking forward to it.

This month marks my 10th year of writing for AlphaMom, so it's officially the longest job I've ever had. (Side note for everyone emailing me asking for tips on how to score Hamilton tickets: Work for AlphaMom for 10 years and Isabel will buy them for you, because she's amazing.) I kind of can't believe it's been that long, even though Noah was just a tiny baby when I started.

I really don't have any plans to change anything I do here or there (besides MOAR FOOD POSTS YAY) and I prefer to keep about 50% of my writing/editing workload doing non-Amalah/mom-centric stuff, so you probably won't see me at any other blogging conferences this year, and rest assured that 50% of my writing/editing is unbelievably boring and you are not missing out on anything.

But for better and for worse, I do owe so much to blogging and the community of bloggers, readers, commenters, and everybody else who makes Monetizing My Idiocy possible. And of course, the very real friendships and connections I've made along the way. It's so good to be reminded of all that, every once in awhile. (And let me just add HASHTAG CHEESY AS FUCK before Adam reads this and beats me to it.)

Amy, for reals? I was reading you when you were trying to get pregnant with NOAH who is like, A GROWN PERSON now, and then we worked at MamaPop together and it was like all my dreams came true and I almost shanked a biz at BlogHer because DON'T SHOVE THE BABY EZRA and now we're here and I just want to tell you that I still love you okay bai.

I love your blog! I can't believe I've been reading it for so long. And I live for your Advice Smackdown, so basically never stop. Thanks.

The only way I'll make it to Mom 2.0 probably ever is if someone I've worked for for 10 years decides to buy me a ticket and airfare and pay for the hotel. I haven't worked anywhere for 10 years, so HAVE FUN. It is always amazing to me, mainly for people have HAVE NOT met in real life, to have followed someone else's life, virtually, for so long that they can say they were there when (insert real life event here).

I will be your TSTO friend!

That $5K I spent on TSTO was totally worth it.

I refuse to spend money on that Simpsons Tapped Out game and have been successful so far but dammit! I want to! (add me if you want more friends that play too much-smiles4u2haz

I would be okay if this turned into a dog blog, Beau is so cute!

Avitable and I live in the same town, but I'm always too shy to say "hello" when I spy him around town. Sounds like the perfect "friend in town" weekend.

Beau is so cute! I love how one of his ears sticks straight up and the other is sideways.

I didn't read all the comments re electric fence on the Beau post so maybe this was mentioned but just keep in mind if you live in an area where there are animals like bears (idk if this applies to you) or even aggressive dogs, these animals can get in your yard but your Beau won't be able to get out. I know someone who lost their dog this way. Maybe this is something the installers will bring up. I don't mean for this to sound like concern trolling, I just thought it was worth sharing because sometimes the electric fence is presented as an alternative to a physical fence, but it is different in that one crucial way. Beau is a lovely little fella and I hope he stays home and safe. :-)

@punturedbicycle Rest assured no bears or super scary wildlife here besides birds and deer (we're far out 'burbs but crazy over-developed 'burbs with nothing but housing developments for miles and miles), and we have a physical fence in the backyard. The invisible fence will simply be our front yard as a fail safe in case he runs out front (door or garage) so we can catch him before he gets to the street or bolts through the neighborhood. As he's done four times in a single week! We still aren't going to let him out there unattended or consider him truly "safe" or "contained" (collars slip off, things malfunction). I'm hopeful with recall training we won't need it forever but this little guy is scaring the crap out of us a dozen times a day right now!

That dog! My God he has to be the cutest dog I have ever seen! Definitely worth chasing through the neighborhood when he gets out.

A clamato based bloody Mary is called a Caesar! It's Canadian! :)

I appreciate you making wise life choices and all, but if you ever decide to stop updating this rust bucket, you're gonna need to send me your phone number so we can take this to the next level.

Yep, definitely no bears. I think there was a supposed coyote spotting a few years ago but I don't think it was ever confirmed.

Jenny you beat me to it. Bloody Mary + Clamato = deliciousness and awesomeness and also Canadian

I read that as "rectal/whistle" so many times. Like, I kept going back to make sure, and each time was all, "woah--it for sure says rectal whistle. Dog owners are fucking intense." But you know what? I never judged. You do you, Amy.

TSTO - kebark226 if you still need friends to help you get all the stupid prizes in all the stupid holiday events. And I spent a grand total of $5 on whatever stupid deal stupid Gil offered a while back - I've forgotten now, other than I got the Duff Beer thing as my "mystery building".

Jenny and Lindsay, I have like "isn't that a bloody ceasar?". No idea it was a thing outside of Canada. Learned something new! Thanks!

Let me try again, without the errors... Jenny and Lindsay, I WAS like "isn't that a bloody ceasar?". No idea it wasN'T a thing outside of Canada. Learned something new! Thanks!