Home Archives About Subscribe Advice Smackdown Tip Jar
"And How Are the Boys Doing?"
Just Call Me Delilah

This Is the Most Suburban Post I've Every Suburbed

We spent all weekend outside, with Jason finally getting to plant the proper non-container vegetable garden of his dreams in the backyard, while I sullenly weeded and pruned and planted shit in the front. This was my halfhearted response to the fact that almost everyone else in our cul de sac was visited by professional landscaping teams last week, and as the lone DIY-ers on the block I am suddenly terribly self-conscious about our lack of real plants and our abundance of weeds.

The 'burbs, man. You don't think it'll happen to you and then it does. Tonight I fully intend to drive my garbage down to the street and bang the hell out of it with a stick.

Although my contributions weren't solely aesthetic, as I planted two small blueberry bushes out back, with the goal of maybe getting some actual berries around the time the boys head off to college. I also want some raspberries, blackberries and a fig tree or two but now that I know how much digging is involved in planting a single (very small) bush I'm thinking we can put those on next year's to-do list.

I also got a sunburn and today every muscle in my body is like, you asshole.

We're excited, though! As our poor long-suffering real estate agent can testify, we rejected countless houses on a "no place for a garden/wooded lot/bad sun position" basis. I still remember Jason's face as we walked through this house, across the wall-to-wall carpet, past the Kitchen of Sadness and out into the wide open, southern-facing backyard. Since the sellers were around he was still putting on an excellent inscrutable poker face, but I knew. One slight twitch of an eyebrow and I knew he was in full-on YASSSSSS QUEEEEN mode and we'd found our home.

For this first spring, he built two raised garden beds out of cedar and dug out the hill on the far side of the yard: 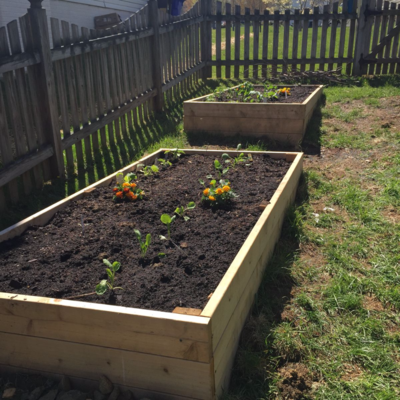 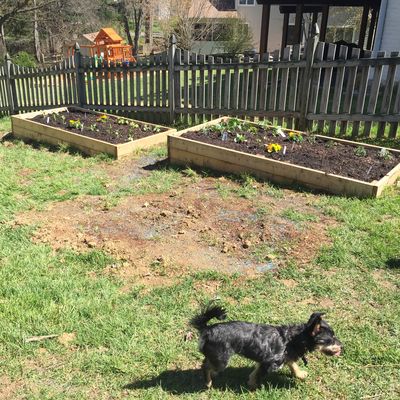 (And destroyed a ton of grass in the process, yes.)

We planted additional tomatoes in some of our old self-watering containers because Jesus Christ, we're apparently planning for a tomato-based apocalypse, along with several containers/bags for strawberries and potatoes. And all our herbs are still in containers up on the deck. I planted flowers in the deck railing boxes, which will all probably die because I touched them, along with everything else I had anything to do with.

(And then after all this I convinced Jason to drive to the store at like, 9 p.m. to procure us a propane-powered fire pit for the deck, as I would basically like to live outside now, or at least until the temperatures and humidity spike to 112 degrees and everything is miserable again forever.)

We kept Beau out with us almost the whole time, albeit with a leash attached. I'd love to give a "X DAYS WITH NO ESCAPE ATTEMPTS" update, but we only made it five days before a babysitter accidentally let him out on Saturday night, much to everyone's collective panic. He came back to the house all on his own, though, not long after he realized no one was chasing him. Hmm!

Yesterday he slipped out of the backyard twice while Jason and I were unloading and carting supplies back at forth, but both times I was able to kill the "game" dead within seconds with a sharp reprimand and an order to lie down. He immediately obeyed and let me grab the leash.

To say that's a far cry from just a week ago is...um, quite an understatement, so I think he's definitely settling in and understands who we are now. (AKA THE ONES TO BE OBEYED, SO KNOCK THAT SHIT OFF.)

I've started clicker training with him too, though we're still in the early stages of teaching him that click = treat. (String cheese = officially the new waffles.) He's shaky on a few commands ("COME," OBVIOUSLY) and pulls on a leash like crazy, so we're going to work through the list one by one. (I've spent hours every day watching dog training videos, trapped inside a YouTube black hole. At least it's not Candy Crush?)

Thankfully, the bolting out the door/gate is only a thing when somebody is leaving and he wants to follow, then once he's free he's like wheeeeeeee. We can sort of predict when it's a possibility now, and know when to keep the leash attached or have someone hold or crate him. (Having the lease attached is by far the best backup in case an escape happens, but since he tends to get tangled up or knock shit over it's not a perfect long-term solution.)

We can safely open doors to come INTO the house without fear of a small furry bolt of lightning darting through our legs, however, and the morning routine of everybody leaving at different times doesn't upset him as much anymore, so he's okay hanging back instead of desperately trying to follow. So while all five us are still on Very High Beau Alert (the boys won't even touch the door handle without confirmation that someone "has Beau"), I'm feeling good that with time and patience, this behavior won't be quite the ongoing 24/7 disaster-waiting-to-happen it was at first.

Speaking of lightning, check out his amazingly perfect new collar: 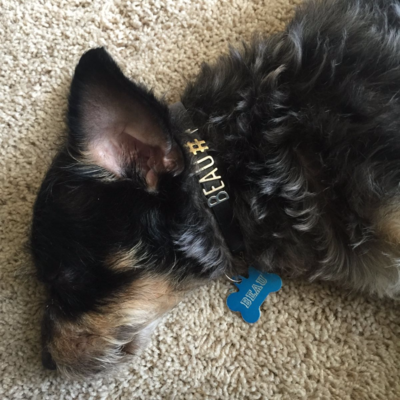 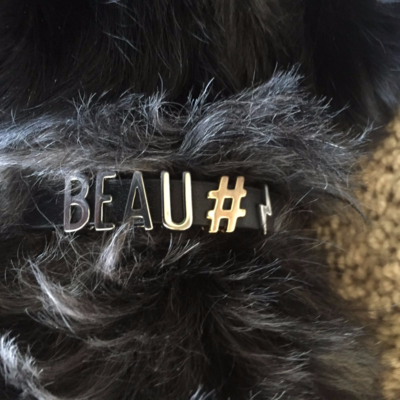 I mean. RIGHT? Come on now.

The collar was a gift from longtime reader Laurie, along with a gorgeous memorial bracelet for Ceiba and Max. (Her website is here; Facebook also too.) The bracelet made me go awwwwwwww, and then the collar made me laugh so hard I almost choked up a lung. 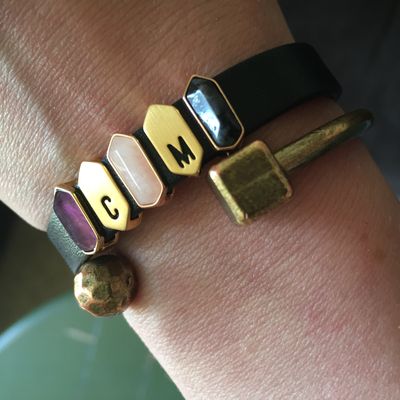 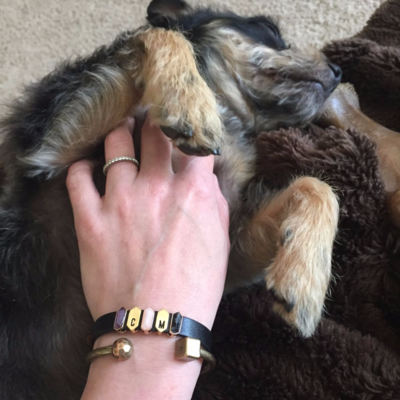 Story of my life these days, honestly.

Your new dog posts make ME want a new dog. Thanks for breathing life back into that thought again. After we had to put both of ours down a few years ago, I haven't been able to even think about another. Beau and his sweet fuzzy belly is definitely to thank! ;)

If you're able to, get the raspberries in the ground this year - you'll have fruit next year. And FYI, they spread like a mother (and honestly it's really hard to control that), so put them in a place where you won't mind if they get a little nuts. Mine started in one half of a 4x8 raised bed and have taken over the whole thing, not to mention coming up in the yard outside the bed (meaning their roots went through weed cloth, rocks, under the wood and up again.) We just mow over what comes up in the lawn. They do make raspberries that do well as container plants and that might be an option too. Strawberries will spread as well.

Am I the only one who saw your bracelet and at first glance, thought it said C_M? 'Cuz that's what I was thinking.

Both of my dogs were total assholes on a leash, the 40 pound one trying to drag me to my death and the 100 pound one trying so stop/snif/lie down. We got them each an Easy Walk Harness and I swear to God, it's a miraculous change. You have to get the kind where you clip the leash to their chest, not their back. I promise.

So glad to hear things are going better with Beau! He sounds like he will be a great addition to your family. For what it's worth, I've found a great site (and used it myself) for dog training if you're interested... http://www.forloveofdogs.jigsy.com/

I hear you on the gardening. We live in a townhouse and our neighbor usually does the planting and the planning for the front garden. Her mother is sick so I tried to do some gardening yesterday. I too usually kill the things I touch (my 5 yo notwithstanding) so I did my best to not destroy anything but woke up this morning sore in places I haven't been sore since I gave up kickboxing. Yikes.

We have big plans for building raised beds in our garden this year, but bitchy Mother Nature decided to dump 18" of wet, heavy snow on us this weekend.

It's gonna take a few weeks for our garden to dry out, so I might have tomatoes in September (I also prepare for the tomato-based apocalypse every year; I have no idea why - most of my family won't even eat tomatoes - except that they seem to grow well even under my benign neglect).

I ordered these SeedSheets off Zulily last fall - they sound perfect, as long as we can get drip irrigation hooked up properly (apparently you have to water plants for them to grow? Who knew?). https://www.seedsheets.com/

That collar though! I would love to get one for my golden retriever, but it would have to say #lazy and #sneakscatfood. So, not nearly as cool.

Oh, forgot to mention I almost couldn't read the whole post because that Bug B Gon ad is HORRIFYING.

Love the bracelet and collar. Off to browse her stuff :)

puppiessss! i love your dog pictures. i try not to give internet advice in general but the gentle leader head collar has literally changed my life: http://www.amazon.com/PetSafe-Gentle-Leader-Headcollar-Large/dp/B00074L4W2/ref=sr_1_1?ie=UTF8&qid=1461022103&sr=8-1&keywords=dog+leash+gentle+leader.

@Susan You shouldn't be seeing any ads like that! I have no campaign with them. Please send screenshots? Possible programmic ads or browser malware sounds like, but I can look into it.

You will hate yourself in the morning if you plant blackberries or raspberries. They spread worse than sandspurs and have nasty thorns that you, Jason, the kids and Beau will get into. The birds and squirrels generally end up getting any of the fruit and all you are left with is thorny branches.
Love the bracelet and collar!

Question -- are there new Advice Smackdown posts? The most recent one I see is from March 25. I seem to sometimes not be able to get any new posts on Alphamom, and then something will suddenly refresh and I'll see that I missed five or six, even though I check regularly and try to click on Amalah, Advice Smackdown, or other links that I'd think would take me to the full list. Thanks!

Loved this ordinary post today. Glad to hear the training is going well. My best new thing I've learned is that when the leash is across the back, the dog has all it's muscles in play - if you pull them to the side, they don't. So now I circle my dog like a horse every time he pulls.

Cimorene - I have the same problem with the Smackdown. It's like it refuses to reload.

I agree with previous commentors about the spreading for blackberries. They are also a huge pain to get rid of, should you ever want to do that. However, there is now a thornless variety! An urban farm here in SC has them. That might make up for some of their annoying properties :)

Blackberries are awesome! But just in case you don't know.... they are incredibly invasive and impossible to control once they get going. Plant with care.... or skip them. And make sure you get both a boy and a girl blueberry, or there won't be any delicious blueberry babies. For real!

I live in a suburban type neighbourhood but not in the US. You beat your garbage with a stick? Please explain to this Canadian. I have never heard of this.