I was looking through my phone's (embarrassingly bloated and disorganized) camera roll last night and came across the photos from Beau's adoption listing. Here he is pre- and post-haircut: 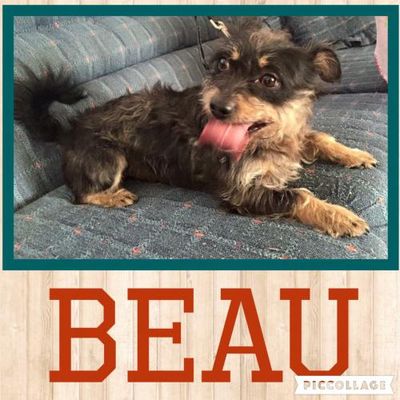 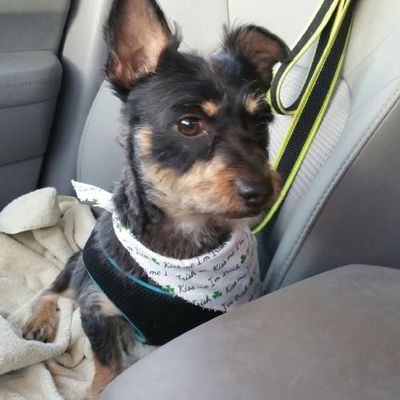 I didn't want to post anything until he was 100% for sure "ours," but in the meantime I sent these photos to practically everyone I knew. The reactions ranged from "OMG SQUEEEEEE" to "NO DON'T DO IT" to "wait which one, are you getting two dogs?" to my personal favorite, "That dog is ridiculous. WHAT'S YOUR TONGUE DOING, DOG?"

"BEING AMAZING, THAT'S WHAT," was my reply, before the conversation veered into potential neckerchief purchases and GIFs of RuPaul freaking out.

Looking at these photos now, I'm not 100% sure what made him stand out to us, or why both Jason and I immediately felt so strongly that THIS ONE, THIS IS THE ONE. Sure, he's a cute little thing but we were wading through a virtual sea of cute little things. But once we saw Beau our search pretty much kept circling back to him. 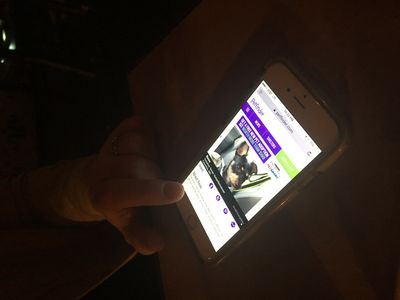 (Beau's listing on Jason's phone during our date night dinner. He started filling out the application the next day, I told him no, too soon, too soon! Then submitted it myself less than 24 hours later.)

Obviously, there were other details included that we liked (good with kids and other dogs/cats, three years old, healthy, housebroken, very playful but cuddly and well behaved, etc.), but there was definitely something about him that we were extra drawn to. When I looked at his photos I could feel his personality radiating through. I knew exactly who this dog was and what he'd be like as ours. And it was just love at first sight, cliched and corny as all hell.

The best part is that, FOR ONCE IN MY LIFE MAYBE, I was totally right. 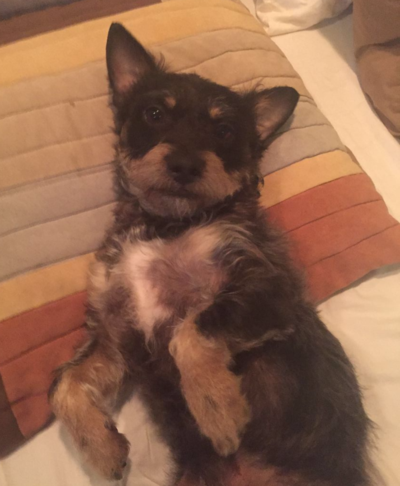 (Was also totally right when I told Jason his attempts at enforcing a "no dogs on the bed" rule would ultimately fail.)

(To be fair I really wasn't much help. But still. HE'S SO SNUGGLY.)

Oh dear God. Every time I see another picture I just want to scoop him up. I am so glad you found someone to fill the furbaby sized hole in the Storch family :) And thank you for sharing him with us....

He's so sweet! We just adopted a teeny tiny furbaby of our own from the humane society. She's a Pomeranian mix. She's 6 pounds (my cats out weigh her. By ALOT.) But she is all personality. Glad you found a new buddy!

I have a mystery terrier named Jasmine who could be Beau's older sister. I never imagined being owned by a terrier, and can not imagine my life without her.

One day we were on a walk and had stopped at a red light. A little girl behind us said to her Dad, "look at the little shabby dog." I remind my hubby of that every time he wants me to groom Jasmine to remove her 'shabby' bits...I adore them!

So very, very glad that Beau found your family. <3

I love his expression in the last photo. It's so, "Are we going to snuggle or what?" So glad you found him and he found you. Obviously, it was "meant to be" ~ L

Yep! He's a keeper! You are one lucky family and Beau is one lucky dog.

Yep! He's a keeper! You are one lucky family and Beau is one lucky dog.

I tell people all the time, you'll know when it's the dog for you. Keep looking at photos and one day, "BAM" that's the one.

He is so incredibly precious! I wish I could pet him through my phone.

In case you didn't know, bau bau is how dogs bark in Italian. I'm partial to one of parents 6 (!) dogs who's also a terrier, she's so bright and responsible and good at killing snakes.

This may be too woo-woo, but a friend told me yesterday that our last dog would lead us to our next one when we are ready. Hoping that is so, because Ceiba sure took care of you guys!

You kept circling back to him because he was YOURS!

In that bottom photo he has such love and adoration in his eyes. You may have chosen him, but he chose you too. He's decided that you are his people! Good choice, Beau. :)

Beau is so damn cute. There is no way I could enforce a 'no dogs on bed' policy with him. Or for any other dog for that matter. My little Tess likes to sleep under the covers....I'm a side sleeper to she sleeps with her back tight up against mine. And every night, after we get situated, I get to hear and feel a super contented dog sigh of happiness. So worth the dog hair in the flannel sheets!