So I was going to write about how I had to take Beau to the vet yesterday because he got an (admittedly much-deserved) swat to his eyeball from one of the cats, but then that pet antic got roundly and solidly out-antic-ed today. Sorry, Beau, your eyeball will be just fine, and you gotta step up your trouble-making game.

I was out back playing with Beau this morning. While inspecting all my newly-planted berry bushes and strawberry plants (they're not dead yet!), I suddenly heard a weird, scratchity-scrambling type noise coming from an...uppish area. It was quite loud and strange. I first looked up at the deck in confusion, then my peripheral vision caught sight of something dropping off the side of the house. It took my brain multiple seconds to process what, exactly, was falling to the ground. Roof shingle? Loose siding? Part of the gutter?

No. It was a cat. A cat just fell out of my house.

Specifically, it was Rey, tumbling out of my bedroom window. 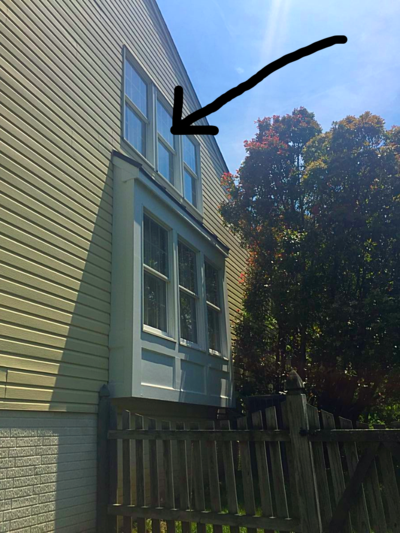 So the previous homeowners did that real estate staging thing where you remove screens from windows to make everything look brighter or cleaner or whatever the hell the reasoning is. (Hey, no judgement, I got shamed into replacing a tarnished mail slot pre-listing.) All the single windows (and kid room windows) have screens, but all of the more "impressive" triple and bay-type windows do not.

(The screens are sitting down in storage, waiting for us to get off our lazy asses and snap them back in. Guess who's motivated now!)

I think Rey only intended to climb out and explore the little roof/overhang part of the downstairs windows, and the initial racket I heard was her desperate attempt to UNDO UNDO ABORT ABORT her mistake once she realized it was slanted. But all that really mattered in that moment was that she was now on the ground, on the other side of the fence, surrounded by freedom, terrible, terrible freedom.

(She and Finn are both microchipped, BUT STILL. CAN WE NOT.)

Rey was cowering close to the house, frantically inspecting a basement window for a way to get back inside, all I'VE MADE A HUGE MISTAKE. She wouldn't come to me but thankfully didn't run, and after a slow, agonizing, no-sudden-moves crawl through some very damp mulch I got my hands on her. She seemed very relieved and VERY anxious to get back inside, where it's dry and civilized.

I brought her inside and raced to slam that damn window shut before Finn went on a rescue mission -- he was just sitting there innocently on the floor nearby, like, "I told her that was a bad idea." 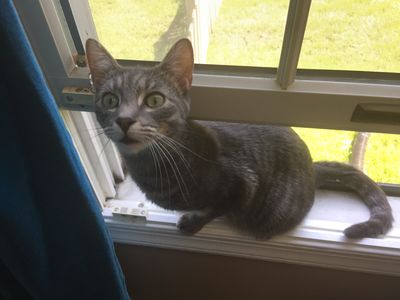 (He prefers the windows with screens, thankyouverymuch.) 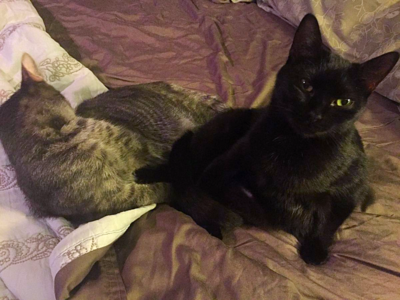 Rey is just fine, by the way. Landed on her feet, literally. Shaken but not stirred, figuratively. 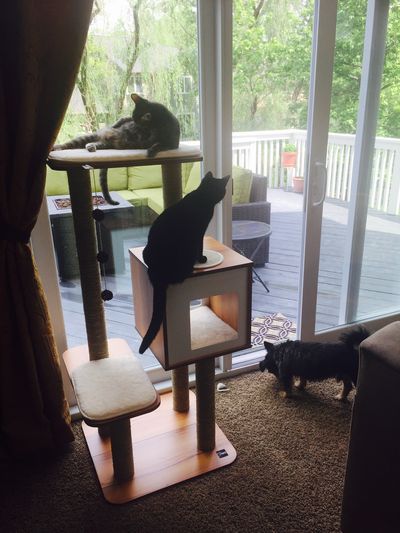 Meanwhile, I need a martini or three.

One Rey life down. Eight are left. So glad she's ok. Now get Jason on "putting them screens back on" duty!

We live in a Cape Cod style home with dormers over the porch roof. Shortly after we moved into our house, we left for dinner one night and I heard a strange sound overhead.

One of our cats had fallen through the screen (which had come detached at the bottom) and found herself stuck on the roof, trying to get back through a screen that had closed behind her.

Thankfully she raced back in as soon as I removed the screen and I didn't have to go out on the roof after her!

Cats, man. I look forward to YEARS of these awesome stories!!

Watch out. I've been warned by professionals that the screens are only designed to keep bugs out, not keep pets in. If the windows open from the top, that's the part you should open. To this day, I only open the top part of the second floor windows.

And you're expressing exactly why I insisted our house have screens. Immediately. I was not willing to close on a house without screens because if we had to put them in, someone would wind up on the roof because we would never get around to doing it.

At least Rey realizes she belongs inside the house.

Sweet JESUS, with these pets. Is your heart still racing? My heart would still be racing.

Wow - I'm so glad she's ok, and that neither she nor Beau decided to make a run for it. Civilized, indeed.

The house I grew up in had window screens that were hinged at the top, so you could push them open from the bottom. There was a hook to latch them shut at the bottom, but our cat figured out how to unhook it and get out. However, once he was out on the porch roof, he couldn't pull the screen back open, so we would regularly get visits from the neighbors across the street, informing us that they could see our cat on the roof again. Cats, man...

Those pets will be the end of you, I swear. lol

Flashback to college days and renting the third floor of a big ole' Victorian, with no air conditioning. And with a roommate who lost the screen to the bedroom window yet insisted she was 'disciplining' my cat from going out the window by sleeping with her arm out of the window. Luckily, my cat appeared to be scared of heights.
I'm glad your kitty is okay. Flying cats should only be seen during college keggers and such.

We had a cat do the same thing years ago. Poor guy landed on an azalea bush though and dislocated his back hip. He recovered but 25 years later I'm still paranoid about cats falling out windows.

LOL, I see you caved and moved the cat condo in front of the window!

Lol, I came to say what Danielle did. Tree looks snazzy by the window, IMO.

That cat tree though. *heart eyes*

The thing that you have to remember is that we in the UK (and the rest of Europe and most of the rest of the world....) don't have screens on our windows and I'm fairly sure also don't have a problem with feline fatalities due to defenestration. Just saying - these kitties will work it out!

I once read somewhere that faith is a black cat making a six-foot leap onto 3 inch ledge. Look! Yours just proved it.

My daughter's blind cat (adopted that way when he was a kitten) took a leap off her balcony one time. We call those "dumb dives". And yes, she had a huge screen made after that to make sure it never happened again!

I can't even open the windows too wide any more unless I am in the same room to watch my kitties. The girl cat (Sophie) will squeeze her body between the screen and the window and I have these terrible visions of the screen popping out and her falling two stories. I'm glad Rey is okay!

Yes, the kitten jumped on window sill. bumped screen, kitten and screen out and down to ground, kitten under window frantically running right and left jumping with no success for window sill 4 feet above him...... Memories. Open any window ONLY from top for rest off your life. Screens do not keep cats in and when pushed out by kittens get holes that do not keep bugs out. Joyous memories. Kitten lived 17 years......

Your friendly neighborhood vet here...we have a phrase in the ER "high-rise cat" in reference to cats doing this very thing. And in vet school we learned there was actually a study where they determined that when cats fall from under 2 stories or OVER 7 STORIES they are very unlikely to get seriously injured! Over 7 stories they do a flying-squirrel type thing and catch air with their bodies, softening the landing. Random info, I know :-)

When my mum was little she went to visit a friend. They were sat in the living room of her friend's house when something large and fluffy suddenly flew past the window. Mum jumped up to see what it was, her friend didn't even look up. "It's just the cat, he does it at least once a day".

The cat liked to sleep on the upstairs windowsill and would just fall off every so often. Everyone was completely used to it! He used to climb up there from the roof of the nearby porch so it didn't matter whether the window was open or not. I should point out this is in the UK so most cats live outside part of the time. Still, the one that liked flying is pretty rare!

We have 10 cats (don't judge) and one of them is an escape artist. We have had incidences of one or more cats escaping. I have them all trained to come for treats, it save a lot of agony if one of them gets out. I keep the Kitty Crack (Temptations seriously, my cats would cut a bitch to get these treats) in a plastic jar and every morning I shake the jar and they have all learned this means treat time. It has been the most valuable think I have taught them. Any time any of them escapes I stand on the porch and shake the jar and the offender comes running for kitty crack!

Glad everybody's safe. :) Where did you find your not-totally hideous cat tree?

Most definately some "fist-world-problem anxiety" going on here. I'm in the UK so I don't know if it's that.. we have no screens on our windows (I'm not even completely sure what they are? Like those things in the movies on doors so you have to open 2 doors to get into the house?) I have two cats who spend the majority of their lives outdoors - like teenagers, they come home when they get hungry (what even is a cat "escaping"? is that a thing? I actually get a bit sad when I hear the term "indoor cat") and when I was a kid, I had a cat who would jump out of the 2nd storey windows regularly.. it's how she used to get out of the house if the downstairs windows/doors were closed.
My point being.. they will be fine :)

I had a cat who pushed his fat old self out of a 3rd or 4th story apartment window that had a screen on it. He landed in the building's parking garage and we found him huddled under a car mostly unharmed. That bozo. He stayed off of the window sills after that.