I found this in the back of the refrigerator today. 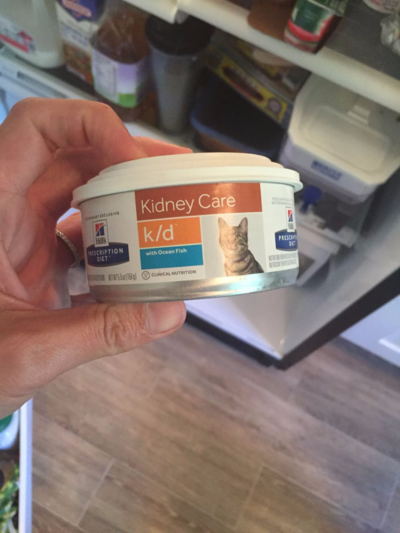 Okay, that's kind of a fib. I've known it's been there for awhile. Probably since the day after Max died. I just...couldn't deal with it, so it slowly got pushed further and further back. Out of sight, out of mind.

After he was gone, I hastily dumped out the litter and scrubbed the evidence of his final decline out of the carpets in our bedroom. I boxed up his unopened food for the shelter and added Puppy and a tuft of his fur to the memory box we'd prepared for Ceiba.

But this stupid, half-empty can of food? Hey man, it's a process. Don't rush me.

Yesterday I created two separate GoFundMe campaigns to raise a little money for the two animal rescues we adopted from -- Tara's House and Kitties & Pitties. A couple Facebook friends had suggested something like that after Ceiba died, or asked where I'd like donations be made in her name. I remember thinking that was a good idea, but much like the can of cat food, couldn't really deal with actually doing anything about it at the time. 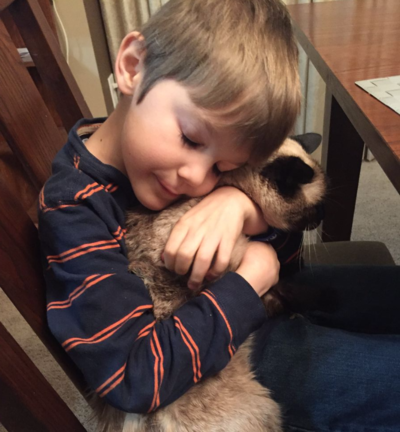 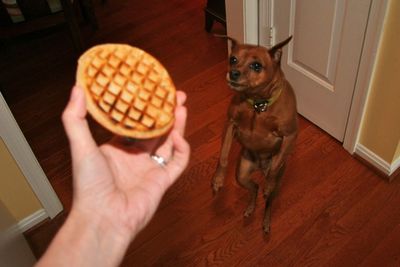 Adopting the new pets was...IS...the best thing we ever could have done. No matter what anybody else thinks of the somewhat accelerated timeline, I can't imagine not having Beau (and now Rey and Finn) around, to keep us company, to keep us smiling, to take a small edge off the massive grief still lurking below the surface. I'm so grateful for what these organizations do, especially since there's little doubt that Beau, Rey and Finn wouldn't be alive right now without them.

There are no gifts or incentives or any bells and whistles for donating (and here are other, more direct ways to help and donate, if you're so inclined), other than my personal thanks and...I don't know, you can go ahead and feel good about yourself for the rest of the month, with my blessing? I'll mail you an imaginary unicorn? Pledge to have at least one small personal disaster involving my shoes this weekend? Ideas welcome. Also monies. 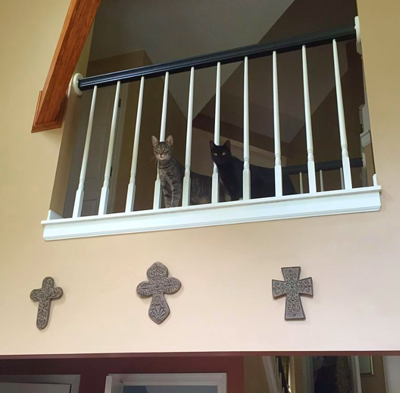 Oh man, that is the PERFECT kitty lookout point.

Ave I see nothing wrong with having new family members to help you through the grieving process. Anyone who does can keep their opinions to themselves.

Haters be damned. But seriously. Adopting more animals does not mean you loved Ceiba and Max any less. It just means you have more love to give. I applaud your decision to adopt sooner rather than later. I would do the same thing. I can't imagine my life without a zoo (current residents - 2 big dogs, 2 little dogs, a cat and two bearded dragons). It would be larger if we had the room.

Just a heads up the text link for The Maximillian Thunderdome Memorial Fund wasn't taking me to a campaign page but a signup/settings page instead. You might want to recheck the link on that one.

We give to our local no kill shelter, so our next donation will be in memory of Max and Ceiba.
When something happens to our (as of today) 19 year old Savannah, I will have another cat THAT day. Not because I don't love her, but because I can't stand the thought of being alone in an empty house all day while hubby is at work. Plus, it will give a shelter kitty and new furever home. That's a win-win in my book. Haters be damned!

That photo of Ceiba made me lol.

I know someone also mentioned it but don't forget to fix Max's donation link!

Hugs to you and great idea to raise money!

We had to put down our kitty of 15 years May 2nd very suddenly and all I could do was put her bag of food in the freezer in our garage. I just couldn't part with it, and don't know when/if I will. The grief is a bitch, and I don't know what we'd do if we didn't have our two dogs. Kudos to you for bringing new sweet babies into your home. Y'all saved them, and they saved you.

I read a really sad thing on the internet once, which I'm not going to find because tears, etc., but the gist of it was the best way you can honor the memory of your former pet is by going out and getting another one from a shelter/rescue organization because there are so many unloved little balls of fur out there just waiting for a home and a lap and love, and what you've done is given three of them just that. So screw the haters, you've done the right thing, Max and Ceiba know it, Beau and Rey and Finn know it.

A very good thing you are doing. Also, grey cat is stunning. Black cat is a cutey too, but grey cat looks egyptian or something. Lucky kit kats.

I went to the local humane society looking for my 12 year old I walked out with 2 kittens to pick up in 4 days after they'd be fixed. Never found my original kitty...not sure what happened but she brought me my 2 kitties. One who only lived for 3 more years and one who is still around.

i lost it at Puppy and then sobbed loudly at tuft of fur. all my heart to you and yours.

I've never commented! But your pet's NAMES!!! Like Sound of Music!!
Beau a deer a female deer, (cause he runs so fast) Ray, a drop of golden sun, Fin a name....thats it unless I change all the words which I will be doing in my head all the live long day because my brain speaks in lyric. Do you rhyme? Finish the song with the names of your boys!

We welcomed our first dog 10years ago. It was the first pet I had ever had as I had suffered severe allergies to basically all animals with fur since the age of 2 and severe asthma associated with those allergies (I would start wheezing within minutes of enter a home with a pet, including so-called 'anti allergenic' dogs like poodles).

I adore our first dog Roger. He is a total joy to me. He is he reason I lobbied for a second dog three years later. If I could love one dog that much, I knew I could love another dog too. I had also had two children at that point so I knew my capacity to love a second would not diminish my love for the first. I love my little Winston too.

Similarly, I believe that when the time comes, I will want a new dog fairly soon after one passes. They don't repace the old dog. Rather, they give you a new life to love and cherish and we can all benefit from having another love in our life.

So cherish your new babies. They deserve it and you have the capacity to give them the love they deserve.