This week, our elementary school challenged students to go screen-free for seven days. No TV, video games, phones/tablets, the whole shebang. Anyone who participates gets a certificate and an invitation to a special ice cream party at school. ME: GUESS WHAT KIDS YOU'RE DOING THIS SHIT. KIDS: AW HELLLLL NO. ME: I AIN'T SORRY. Each day they were to document what they did instead of screen time. And I tried very hard to fill the void with fun stuff. I relaxed the chore chart to give them even more free time to play. We went to the bookstore and got everybody new books for bedtime reading. We cooked together and had a living room dance party. They built epic Lego creations and drew comic books and took Beau for walks. We went out for a special mid-week dinner at a restaurant. (And FINE. We did make one exception to watch Force Awakens as a family on May the 4th. Because we do not mess with the holy holidays, you guys.) But if I were to be honest, I think their forms would technically look more like this: SUNDAY: Spent entire day arguing with parents about the inherent unfairness of this... Read more → 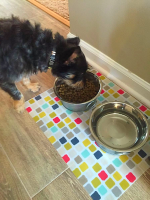 This post is sponsored by CANIDAE®. When we adopted Beau, his foster mom gave us a small container of his current food, just enough for us to transition him over to the food of our choice. She said this, then paused, and asked if we'd mind telling her what food we planned to use. When I told her I was thinking about trying CANIDAE®, she looked visibly relieved. "OH GOOD," she said, before going on to describe some other dog food options using some rather colorful adjectives. She also gave us a slow feeder bowl, as Beau was prone to scarfing food down so quickly he'd barf it all back up. He was also highly protective of his food, so we'd need to remind the kids not to interfere while he ate. All pretty standard rescue behavior; after all, he'd been one of waaaay too many dogs at his original home, and was very underweight when he was surrendered to the shelter. He shared his foster home with four other dogs, all of which had their own sad histories of neglect and not enough food. And sure enough, we brought him home and gave him some food, and even with... Read more → 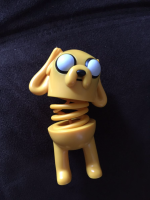 This morning Ike insisted on bringing his current-new-favorite-toy-ever in the car on the way to preschool. It's a crappy plastic toy from a Happy Meal (come at me bro) and also kind of creepy: It's the dog from Adventure Time, but his torso has been replaced with a rigid plastic spring. So he...kind of wobbles? You can...sort of stretch him out but not really that much? It's literally hours seconds of fun WTF! Now Ike has never seen Adventure Time. Noah went through a incredibly brief phase where he watched it, and we have at least one t-shirt and pajama set from that period floating around the hand-me-down chain somewhere. But it never really stuck. Probably because I actually found it to be somewhat entertaining, and my children are allergic to any children's television programming that DOESN'T make my eyeballs and eardrums recede into the depths of my skull. Anyway, this toy has been the Best Thing Ever for a good 24 hours now, but on the way to school Ike realized he didn't know the dog's name. So he asked me. "Oh, um, hmm," I replied, drawing a blank. My brain immediately loaded up the show's theme song, which... Read more →

My Brand is Crisis 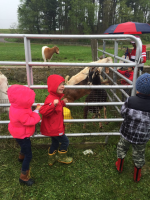 Before I left for my (brief, more-time-on-planes-than-on-the-ground) trip to California (for all of one day at the Mom 2.0 Summit), I had a LOT of shit to get done. Important shit. Like this: My track record for chaperoning field trips in horrible weather remains almost impeccable. If there's an outdoor activity planned, the temperature will inexplicably drop 20 degrees that day. If there's a hayride involved, it's going to rain, so prepare yourself for a damp butt. I was supposed to chaperone Noah's fourth-grade field trip to Annapolis that morning, before realizing I was double-booked. Triple booked, actually, because Ezra had a doctor's appointment to get his hearing re-checked, so Jason had to cover that one, right before I bailed on him for the next two days. Whoops. So yeah. Ezra recently failed a hearing screen at school. Just like he failed a hearing screen back in preschool. That time a follow-up revealed nothing out of the ordinary, and the doctor suggested that he was just too little to understand the testing instructions. This time the follow-up revealed that his eardrums are misshapen. That's usually is the result of chronic ear infections or allergies, neither of which really applies to... Read more →