Who Needs a Title. CATS! 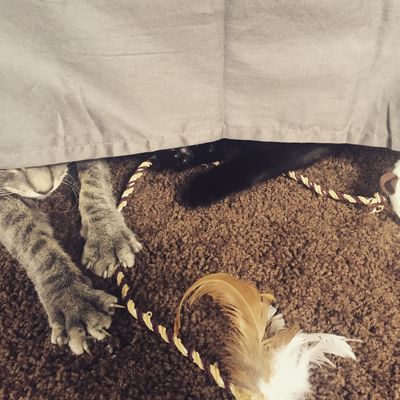 At some point last night, both cats (now mostly officially known as Finnie and ReyRey, shutup) emerged from underneath our bed and decided it was time for a takeover. OF PERSONALITY.

They played, they nuzzled, they cuddled, they had some cautious interactions with Beau, and settled down to sleep between Jason and I while we watched TV in bed. They let us give them each a dose of medicine and amazingly did not seem to hate and/or plot our demise afterwards. They then woke me up at 5 a.m. with a folie à deux-style catfit, racing around at top speed, meowing and tumbling and wrestling with each other (and my hair).

They're still really skittish around Beau, who to be fair, is being a total spaz and can't seem to resist the urge to charge right at them -- totally playful, well-meaning and with tail wagging -- but understandably the cats are still like AW HELLLL NAH. (Also he keeps stealing their food, which certainly isn't winning him any points in the Not Super Annoying category.)

The eye of ReyRey, which changes from bright green to yellow to orange, depending on the light.

Rey did work up the nerve to walk up and nuzzle Beau a bit last night while I held him (relatively) still, so I have no doubt they'll warm up to each other eventually. We're trying to simultaneously give Beau extra love and attention (SO JELUS) while balancing extra crate/outside time so the cats can feel safe to explore, and at this point I can only hope the human children are fending for themselves okay because who even knows. I have to feed the cats up on high surfaces so the dog doesn't eat their food so sorry kids Imma throw some spaghetti on the floor, because you have better defensive instincts. 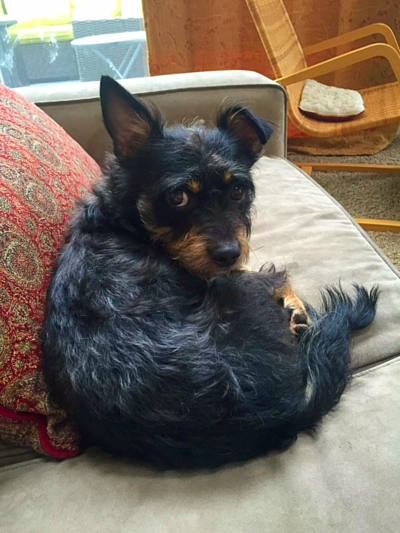 (ALTHOUGH WHO CAN RESIST THAT FACE. HERE HAVE ALL THE SPAGHETTI)

Because the cats are playing hard to get, the boys are obsessed with them. So typical, guys. Ike spent his entire post-school day staring into the darkness under our bed, talking to the kitties he could not see, but already loves beyond measure. Each kid got some quiet one-on-one time with them yesterday afternoon to nuzzle and offer them toys and treats, and that seems to have gone over well. Especially since Finn was a particularly attentive audience to Noah, who just wanted to talk to the cats about Minecraft and demonstrate the game with Legos. 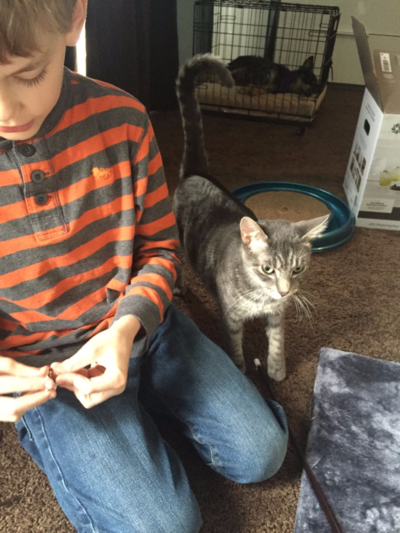 Beau's all, I've sat through this Minecraft stuff a million times. I'm out. 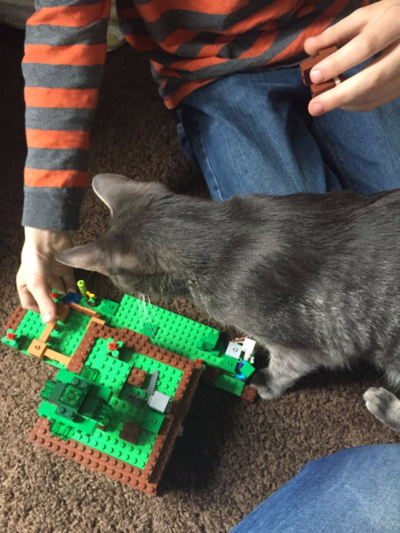 While Finn was like, cool, cool, can I knock some shit over? 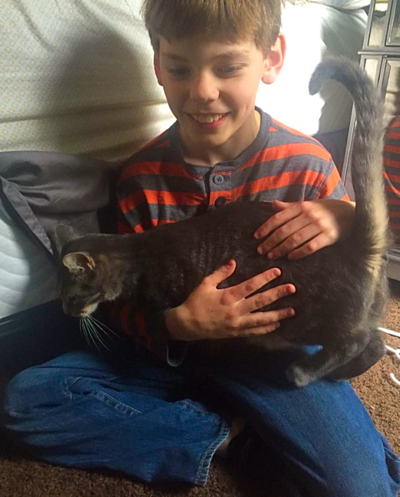 No? Okay I'll just sit in your lap and melt your heart out instead.

Today they both are happily playing with Ike on TOP of the bed, although still not quite brave enough to face the rest of the house in daylight hours. They love the stairwell landing just outside of our room, ventured into the kitchen at the sound of the Magic Can Opener this morning, but then decided against sticking around once the Magic Coffee Grinder started up and skittered back upstairs like a real-life NOPE NOPE NOPE gif.

Meanwhile, when it's just me and both of them, it's hard not to cackle with crazy cat lady glee, as they both like to be held together and purr and enjoy simultaneously belly rubs and I'm like AH MAH GAH KITTEH OVERLOAD. The extra chaos is already totally worth it, although damn, we are going to need a metric truckload of lint and pet hair rollers.

So happy to hear everything is off to a great start with the kitties and pup and kids dynamic!

There is a great picture book called "Katie Loves the Kittens" that I think Beau should read. He would totally emphasize with Katie's desire to play with the kittens, but inability to do that without barking and chasing them. Spoiler: happy ending.

Just embrace the pet hair. The best people are covered in it.

a) KITTEHS!! YAAAAAY!
b) Does Noah want to come over and play Lego/Minecraft with my kid?

In introducing my dogs to the formerly outside cat I brought in, I let nature take it's course when they got too rambunctious or overly interested. I see your cats still have claws. Kittehs will give Beau one or two serious swipes and Beau will quickly re-examine his stance on cat chasing.

It's so sweet to hear the contentment in your voice as I'm reading your entry. Nothing in the world quite like the unconditional love of animals and kids to set the world right, especially after such big and close losses. So happy for you and yours.

Oh this makes me so damn happy.
Two cats and a dog over here too. Yes, you need a shit ton of lint rollers. Keep them everywhere, on every floor of the house, in your bag, etc.
So totally worth it, though. It's hard not to have a happy heart with all the cuteness you will constantly be exposed to (and, of course, your cute kids! You have cute overload!).

Seriously, such lovely news that I needed to hear, for countering the sad stuff going on around me right now. Yay. Thank you!

In my world, no outfit is complete unless there is cat hairz on it. Same, same with the furniture, floor, tabletops, lights, oh hell, everydamnthing in mah house. We have a long haired Maine Coon, we has cat hairz. If you can't deal, stay home!my cat lives here. You don't!!

Ah yes the kitty litter. It is amazing how much more litter is required to go from one cat to two. I buy litter every week, regardless of what I vaguely think we have in stock at home. There is nothing worse than having to make a late night run because, oh crap I'm out of litter and the cats are beginning to eye the houseplants.

I can't help but SQUEEEEE! at these posts with Beau, Finn and Rey. Just can't handle all the cuteness and sweetness! Definitely sounds like a house full of fun and love. (And I might be a little jealous that my two cats don't get along like that, although they are two boys, and aren't the same breed or age.)

I cannot wait for the first photo of them all together in one big nap pile. Its gonna happen. I can feel it.

I just looked for the 'like' button on this post. Nothing makes me more gleeful than happy kitties with happy families!

I second Pamela: embrace the pet hair. It's a losing battle, anyway.

I have a dog and 10 cats- a laser light toy is the best $8 you will ever spend. And cardboard boxes. I have all kinds of fancy expensive beds and the cats choose empty boxes from Amazon to sleep in.

I've been reading you since my first pregnancy (4 years ago). You've answered me on the advice snack down not once BUT TWICE.

I love this blog more than words can say. I will be donating for your sweet furbabies to the Maximilian fund once you fix the link (since I have both a Maximilian and an Ezra of my own).

Kind of can't believe you used the word 'spaz'. Bit shocked to be honest....