And the Mondays Keep On Rolling

As a generally optimistic person (or just a naive dumbass), I naturally assumed that there was nowhere to go but up after the Monday morning clusterfuck. And yet I was in no way surprised when Tuesday morning kicked off promptly with Ike projectile vomiting at the breakfast table.

I'd just smugly finished packing his bag for the day (INCLUDING HIS LUNCH GO ME) and turned around just to see it happen. An entire cup of milk, all over his nice clean bathing suit and matching(!) swim shirt, his chair, the floor, just everywhere.

And so instead of a second day of summer camp -- a precious day, one of only 10 days I'd ponied up for childcare for him all summer -- Ike spent the morning getting a bath and ushered back to bed. Then he voluntarily relocated to the floor outside the bathroom after the next wave hit him 20 minutes later. 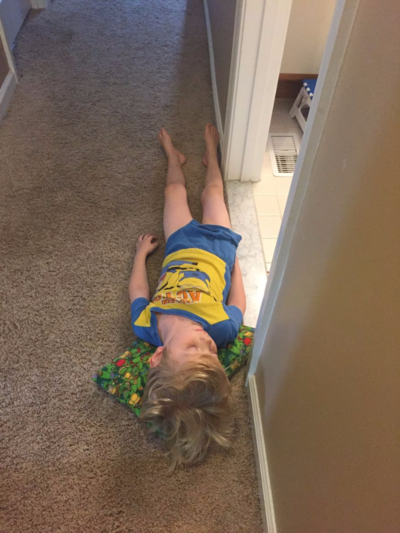 And that was our morning. By mid-afternoon he'd perked up enough to sip water and watch some Super Why, then had a little dry cereal and another nap. By dinnertime he was running around like a lunatic all I WANT TACOS AND CANDY I'M STARVING.

So. He is back at camp today, and now the big question is who will throw up next, and when?

(Trick question. It was already Beau, but only because he keeps trying to eat cat poop out of the litter box.) 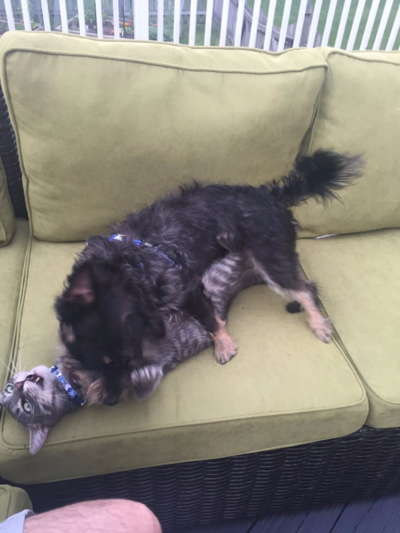 (I feel like this photo sums up my entire life right now.)

(They're fine! They're getting along really well now! They're just playing their favorite game of let's-pretend-to-rip-out-each-other's-jugulars.)

Sounds like what happened to my 4 year old two weeks ago. She looked the worst I've ever seen her, demanded to go back to bed, only to throw up all over the bed. By dinnertime? Hysterical that we wouldn't let her eat whatever she wanted.

Love that last picture of Beau and Finn. Adorably hilarious!

Oh my God, Amy, I am dying of laughter. Everything from "cat poop" on, especially Finn's face: so hilarious. Fastest pivot ever from sympathetically awww-ing over Ike to nearly shooting coffee out my nose.

What? That's not tootsie rolls that you hide in the litter box?!
Glad Little Boy Ike is feeling better.

Why?? Why do kids do this?? My kid has a regular habit of throwing up his breakfast, being totally miserable all morning, and being back to his normal crazy self by dinner time. He's done it three times in the last three months.

Whoa, that was a zero to 50 from "WHATISTHEFURRYWAGGINGTHINGMAKEITSTOP" to "Hey dude, chew my neck?"

And your family has earned several gold medals over the years for Olympic-caliber puking. I'm glad Ike is feeling better.

Sounds like a prime example of "I took my perfectly fine kid to the doctor's office for a checkup and now he's sick."

Ugh, I'm not usually a germophobe, but my kids *always* seem to pick something up at their well-child visits, so now a visit to the pediatrician puts me in "ah! don't touch that! Here, let me bathe you in Purell!" mode.

that picture is everything pet ownership should be <3

Our dog also enjoys the delicacy that is cat poop straight from the litter box. We have a baby gate to help prevent it (cat can jump it, dog can't) but if we're lazy and forget to latch it then it's poop for doggy dinner. Our vet said it won't hurt the dog, but it sure is gross.

The grossest puke is the dog ate the cat poop kind of puke. I've been there. We now have hooded and enclosed litter boxes that our shortie dog cannot get into. Doesn't stop him from eating poop, though. He makes rounds in the back yard searching his own, home brewed, delicacies. Once they reach the optimal vintage, he enjoys a nice poop snack. (Barf.)

Five stars for the best photo ever at the end of a post!