Thanks to all the snow days, Noah and Ezra's school added a full extra week to the year. However, I am officially calling foul on this extra week, because it appears to be utter bullshit.

There's no homework, band practice or library visits. Desks were thoroughly emptied on Monday. Every notebook, workbook, and folder already came home. Even Noah's paper textbook covers are sitting in the pile, along with all their crayons and pencils. We live close enough to the school that I can hear playground noise practically non-stop.

When I asked Ezra what he was even DOING at school I got a convoluted report of extra story time, movies and building a fort out of empty boxes in the art room.

Noah simply shrugged and said, "Nothing."

Which, fine! It's like a week of daycare, for free! But honestly I think we'd all just rather sleep in a little bit and not have to worry about finding clean shirts and matching socks and packing lunches even though today and tomorrow are HALF DAYS and yet lunch still happens at school and that will never make sense to me.

(At least Ezra agreed to buy his lunch and use up the last money in his account, although the school lunch menu for June is ALSO bullshit, like the cafeteria staff clearly just went FUCK VEGETABLES LET'S JUST EAT PIZZA AND HOT DOGS EVERY DAY IT'S A PARTAYYYYY.)

Next week everybody will be home at the same time, and I have Big Plans to present each child with a custom agenda each morning: What chores they are expected to accomplish (complete with everybody having a dedicated Do Your Laundry Day), what outside activity they will engage in and for what length of time (they are all such Inside Kids it's borderline embarrassing, so I literally have to force them to play outside), some kind of reading/flash card/educational pursuit, and of course, screen/Xbox shifts for everybody because I'm not completely delusional.

Then Noah starts a four-week social skills program, Ezra's picked an art camp, and since Ike thoroughly enjoyed his preschool's summer camp I think I might go ahead and sign him up for one of the county's camps.

(I know I seem way behind the eight-ball on summer childcare but it's more because 1) I had no idea what my workload was even going be like, freelance/contract-wise, and 2) my kids can certainly be a distraction but they're all honestly getting self-sufficient enough to not require constant supervision. As a three-pack they can get pretty fight-y/tattletale-ish so I arranged the schedule to keep most of June/July at a one-in-camp-two-at-home ratio. We'll see how it goes.)

Wow, this ended up being super boring, but I've typed enough words that abandoning the post would annoy me too much.

So I guess I'll just wrap things up with some rando pet photos and then go microwave a burrito or something. Truly a thrilling day here at Yellow House. 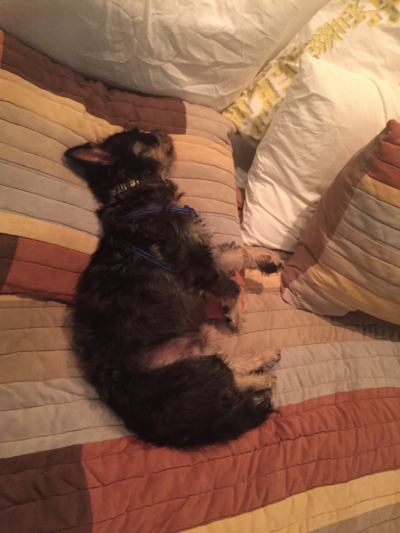 Beau likes to sleep on the guest bed in my office like a little person. You have no idea what it takes to resist just turning off the laptop and spooning with him all day. Although I don't know how happy he'd be about sharing his pillow. 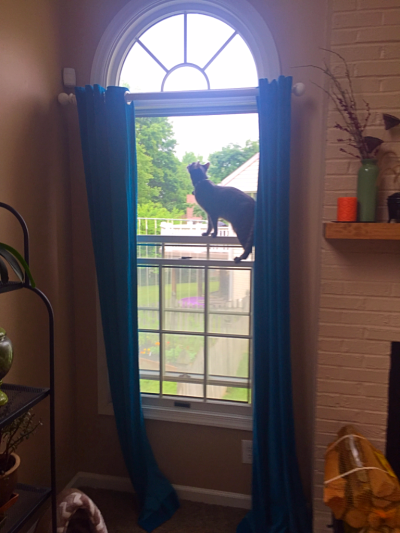 So I got a little nervous about the cats possibly popping out the window screens while lying in the windowsills, so I figured I'd outsmart them and open the top panes instead. I took this photo seconds after Finn climbed up the window, spider-pig style, and seconds before he lunged at a bug and knocked out the entire screen. (It startled him and he jumped inside and not out, but I officially need to correct my early prediction that Rey would be the one to kill us all. They are equally united in their quest to give me a goddamn heart attack.)

Lunch = subsidies and sadly some parents don't feed their kids. free or reduced lunch is where it's at. (Breakfast too)

Yep--they serve lunch for those kids that don't always have a meal at home. There are kids that only eat their meals at school so lunch is served before they go home. Before anyone asks where they eat during the summer--there are summer feeding programs at many schools, parks, and other gathering places.

I don't even know what "spider-pig style" means, but it makes me laugh!

@Jocelyn, can I respectfully ask that it be "some parents can't afford to feed their kids?"

We are in Baltimore City and our kids don't get out until the 21st. WHY

I've loved the no homework and fun activities. At least for 1st graders they've finally had a few developmentally appropriate weeks. As others have mentioned, lunch seems silly when they only have 3 hours but not so for those who rely on free and reduced meals to make a budget work. The credit on the school lunch accounts carries over until you leave the school district

Spooning with the dog(s) is my Most Favourite Thing. So much so that I will take them to bed with me and then blame the dog(s) when I fall asleep if the DH asks.

ccr in MA - Spider Pig style comes from the Simpsons, I believe. Homer had a pig and he sang the Spider Man theme while holding the pig upside-down so he could walk on the ceiling. "Spider pig, spider pig does whatever a spider-pig does. Can he swing from a web? No he can't, he's a pig."

I love the pet hi-jinks (I have no idea if I spelled that correctly). So cute.

The lunch thing is because there's some federal regulation (I think tied to the free lunch program) that says that it doesn't count as a school day unless you serve lunch.

Oh, man, the last week is rough. I'm a teacher and yesterday was our last day. Tuesday we took the whole school to the beach (annual beach day is usually awesome), but it was so cold we came back to school early. Of course there was nothing planned, so we piled the whole school (all 50ish kids) into a classroom and pulled out the fancy popcorn maker to try to salvage the day. Yesterday was field day (half day, thank god) and it was clear that pretty much no person there had any fucks left to give. It was a great day and everyone had fun, and we even had to repeatedly ask a few kids to pack up and go home, but we were SO done.

My kids still have another week of school. The last 2 weeks have been a bitch. I'm guessing next week they will be not busy because grades close tomorrow. At least the ES kids can go outside. Not so for the big kids. Oh, and I've always been a last minute summer camp Mom.

Matched socks are over-rated. My kid actually prefers to wear mismatched socks. There's actually an overpriced store where you can buy them already mismatched but we like to do it the old fashioned way. :-)

I'm super impressed you have to worry about the cats jumping/falling out of windows because they are OPEN. Here in Hotter Than Hell Houston we will be hermetically sealed to keep the A/C in until at least October.

I buy 10 pairs of the same color/sized sock (youngest has green, oldest has blue kind of deal). Then, I just put the same-colored socks in a basket in the drawer. Upsides : no orphan socks and no matching.