One very notable difference between the New Pets vs. The Ones I Still Can't Really Talk About Without Getting Weird is how many stupid nicknames they have. Although "nicknames" isn't really correct, since I keep taking their existing one-syllable names and making them longer. I'm a blabbering baby talk idiot, all of a sudden.

Max was always just "Max." One time Jason overheard me call him "Maxi" and was like, ew, stop that, he's not a menstrual product. Ceiba was occasionally called Ceibs (pronounced Saybs) or Ceiby (rhymes with Baby), and I sometimes called her Girly. But even that comes NOWHERE close to the number of ridiculous names I've caught myself using lately.

For example, in the past 24 hours, I have called my pets all of the following: 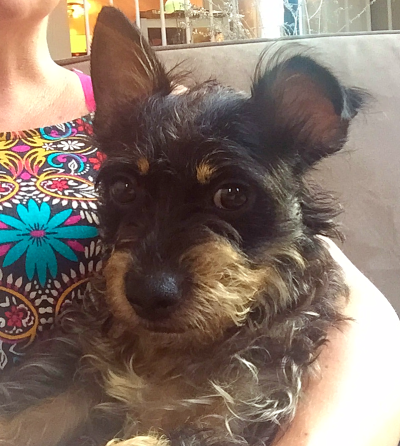 Scruffy McShugs (he needs a haircut)

Potato (I have no idea) 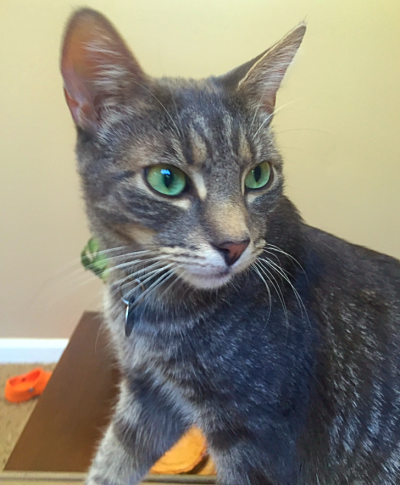 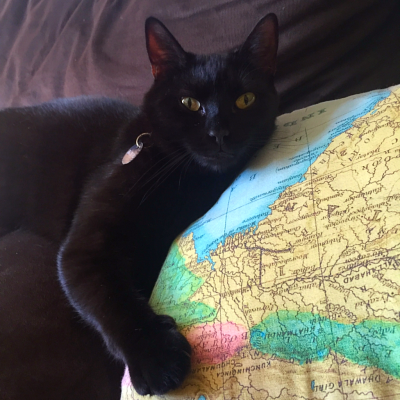 Dumb Baby (because she kind of is?)

And this doesn't include the super generic shmoopy ones they all get called (Snuggle Monster, Fur Baby, etc.). I'm a mess. I'm losing my edge, or at least my mind, because I can't stop with the ridiculous baby talk around these animals.

Meanwhile, in an effort to curb that thing I do where I call my children by every other possible name first before getting it right ("NOAH IKE BEAU J REY FINN I MEAN EZRA"), they all go by the nickname of "Buddy," and are simply expected to read my mind and know exactly which "Buddy" I'm talking to.

This seems fair and fine, and will likely continue. 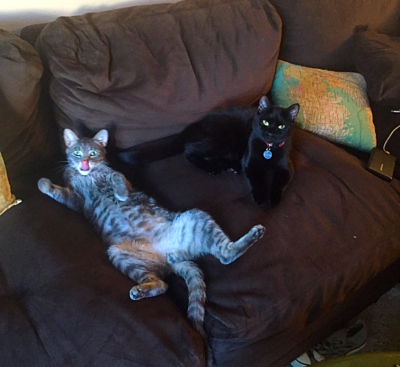 Finn's eyes...ummm...amazing! If I told you the names I call my dogs you would feel much better. Oh and I also make up songs with their names. My big dog is known most of the time as Flufflepuff (yes like Hufflepuff but she is way fluffy).

We used to have a beagle named Beau-- it's a great name for nicknames. We called him Beauses (rhymes with Moses), Beau-sy, Beau-sy Schmoe-sy, and occasionally Beau-sephus. Also, Prairie Dog because he would walk around on his hind legs looking for food.

My youngest has the same name as your boy cat and we use all those Finn variations! We also add Finner(s) and occasionally maybe even say Finner Finner winner dinner. I don't know why, we just do that sometimes. We're probably weird.

This is so hilarious. We have a dog and we spent a week trying to name her. Shes got Beau's same coloring so she looks masculine and we found her so we had no idea what she was going to end up looking like. (The vet thinks she was like 8 weeks old when we found her.) We landed on Rigby and it is PERFECT for her!

Things we call her:

(Looking at this list I think Mr. Freud would have something to say about it...)

Our first cat's official name was:

Rusty P. McRustyson (he was orange)
The "P" stood for:
PustyFustyNusty

That picture of Finn letting it all hang out is adorable... I think he has made himself at home! He has gorgeous eyes. Love all your pets - and the stories they generate!

We have a dog we adopted last year named Nita. That went to Nita-Beeta. Then Beety. Now she's mostly just Beets. (Don't ask - the teenagers started it! LOL)

The cats we adopted a few months later from the same shelter were named Apollo (boy) and Athena (girl) but are now mostly referred to (again, started by the teenagers) as Paul and Tina.

I have no clue how the dog got stuck being called a weird food name and the cats with human names, but whatever. I mostly call them all Spoiled Brat or Crybaby. :)

Haha, Our dog is named Louie, so Lou-bear, Louis, Louie Ferrigno (The incredible hulk actor), Lucifer, Louciuos, and probably more I am not thinking of.

I took to just saying "You, you know which one I mean." to my children. They almost always know who I'm talking to.

We also have a feline Finnegan, who is mostly Finny, but may I offer (along with all your names) Finneninnegan or Ninnegan.

We have a Bulldog named JoJo so she has many nick names JoJo Bug, Baby Girl, and Bugaboo.

I love this. All pet people do this, its inevitable. I rarely even call my cats by their names unless they're being naughty or I want them by me.

Rocky=
rock
rock man
rock bock (idk...?)
broccoli
rocco's modern life
rock monster
snufflor (husband invented name because he like snuffles when he nuzzles you)
trogdor the destroyer (another husband name because rocky is clumsy and sort of a menace)

Apollo:
Baby-he acts like a baby and still has a kitten face and likes to be held like a child over your shoulder ALL the time, do not put him down or else.
also:
baby boo
boo boo
cuite boo
lovey boo
He gets all the crap nicknames.

I'm glad I'm not the only one! My dog Yuki (you-key) now answers to like 5 of her nicknames. Her full name is Yuki Pooka Puppens Snuffleupagus so madness ensues. I call her all those names along with snuffy, snuffins, pluppins, snuffs, pooks, pups. My boyfriend thinks I've totally lost the plot :D

Our dog Lady had lots of nicknames, but my favorite was Princess Peapod (because she was the princess and she smelled like pee, poor old girl).

And my dad is still, in his 60s, known as BillyBobbyKathyJohnny by his mother.

Everyone in my life has always had nicknames; but for some reason, we call my two sons by their real names. It's weird.

And also, all of the above comments made my lunch hour. Thank you, ladies.

Oh, the nicknames of our cats. Long list. Chacha (we live in France) is choupichou, chipichi, sasa,sousou, chachamouillé (when he's wet), lepetitchoupichou etc ad nauseam. Then there are the songs. Our other cat is just Miau or Miauette, but she gets songs too. Tewtelly our babies both of them! 1 bf, 3 kids and 2 cats, I go through the whole namelist when I talk to someone.

I call our Staffie, Milo:

My husband just calls him "Boy."

I have a Finnegan cat, who goes mostly by Gins (hard G) or Ginzie (also a hard G). He also goes by his full name, but never by Finn (which is what I thought I would call him.)

Scarlett, also a cat, only answers to Keeten. Of course.

I have no pets and 2 boys...they get called Bud or Buddy A LOT! They just both answer which is fine with me.

I have a dog Tess that looked like a little baby bear when she was a puppy, so first it was "baby bear" and that got shortened to "B.Bear". Which I have to enunciate in public lest people think I named my dog Bieber.

I also have a dog Ike (which I may have adopted roughly 5 years ago and lifted that name from somewhere) who we call coonie (part coonhound) or ike bike (no idea).

And then Buddy Cat because he answers to it and there is no point in changing it now.

Our 'elder statesman" cat was purchased by my In Laws at 8 weeks, and we inherited him at 3 years old (he's almost 9). Name is Scamp, he gets called
Scamp
Scampadoodle
Scampers
Fuzzy
Senor Fuzzybutt
Ken (as in Ken doll, beautiful but dumb)
Doofus
Fuzz
Buddy

Java, who is a Rey lookalike, is 2 and he gets called
Java
The hypercaffeinated kitteh
Hyperboy
Bud
Bitey McBiteface (like Finn, same reason)
Ding Dong
Trouble
Stupid (like when he climbs up on the art ledge and can't get down and meows at us to come get him)|

I think we all have called pets by kids names and vice versa. My mom consistently went through seven names before getting to mine, so I've warned my kids that it is a mom thing!

Rey breaks my heart, because she looks like my deeply beloved litters, named Kali (by the pound, it is a good description of how she feels about strange men). She looked just the same. My sweet girlie died of breast cancer (FUCK CANCER) when my older daughter was two months old. You love Kali's clone, Rey, so hard please. I miss Kali and see her in Rey. Please give her bacon in my name?

I had a cat named Thomas, and somehow I started calling him Thomas McGilli-kitty. The Scottish Cat Detective. I was the only one who found it funny.

I call our car 'Noodle' so often that I forget her actual name ('Roxy'). She drapes herself like a wet noodle over my husbands lap when she wants snuggles, hence the nickname. Alternate nicknames: Chubs, Loafy McLoaferson, Roxanna. You're in good company.

Long time lurker. Have to comment on this.
Our cat Kismet:
Kissy
Kissy pants
Kiss Kiss
Kissy Kissy mau mau
"sit" head
Pickle pants...the only name she comes to is a version of this...
Pikku Pikku.
Neighbors must think I'm nuts yelling for her.

My husband and I REGULARLY mix up our daughter's name with our dog's. When he said he picked up Natalie's (our daughter's) poop in the yard, it went too far. Our dog is relatively new to the family, our daughter is 10. Apparently the dog has quickly become a member in good standing, as we can't distinguish her from our ONLY CHILD.

And he comes to pretty much all of them!! I think that's more that he's an attention whore rather than "OH MY GOD WE HAVE A GENIUS DOG OMGZ"

Okay so first thing to pop into my head reading this was:
(sing-song)"Bo bo skee wotten totten!"
Like the hand clap game from back in the day, ya know? Am i crazy? Please tell me someone else remembers that...

Also I totally have done this with my 2nd child. My oldest has maybe 3 pretty nondescript nicknames. But my younger kiddo's name is just SO VERY rhymable and I feel kind of guilty bc I just cannot help myself!

Love this post! I have too many cats and some have more nick-names than other but these are the most used
Mao pronounced Meow)- Maosers, Fluffy-Nuzzikins, Mr. Mao-Mao Mozerkins.

Fossey- her name is for some reason very easy to use as another article of speech so we've got Fossey-Feet, Fossey-Face. She's taking a Fossey-bath, she's in her Fossey-bed, eating her Fossey-food, etc.

Love reading every ones nick names for their pets :).