This post is sponsored by Hologic, Inc., the makers of the Genius 3D MAMMOGRAPHY exam. This Sunday is National Cancer Survivors Day, and while cancer has managed to take quite a lot from our family over the years, I’m super grateful for the One That Got Away. My mom was diagnosed with breast cancer back when I was pregnant with Noah. A lump, a mammogram, a biopsy, a mastectomy. A terribly all-too-common story—one in every eight women will develop breast cancer in her lifetime—albeit with the silver lining of early detection. When breast cancer is found early, the five-year survival rate is nearly 100 percent. Of course, when you’re in the throes of a suspected cancer diagnosis, it’s always a terrifying timeline. How long has it been there before anyone noticed? How fast is it growing while we wait for results? How early is early enough? This year marks her 11th year as a breast cancer survivor. She was at the hospital the day Noah was born, and has been cancer-free ever since. She’ll be spending this Sunday here at our house, celebrating Ike’s birthday. As my own 40th birthday looms ever closer, that “one in eight” statistic looms larger.... Read more → 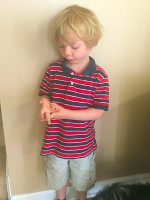 I don't mean to alarm anyone... ...but according to our math... ...Baby Ike is five years old. I don't know how that happened either, but here we are. A fully-formed little boy with a big personality, who smiles with his entire body, who hurls himself around the house with the sheer force of a superhero-fueled imagination. A sweet little boy who still wants to hold my hand and cuddle, who quietly asks "but will you be with me?" before any new situation or outing, revealing a painfully shy streak underneath all that ham, bravado and cheese. He loves animals, great and small. If he had his way we'd have a horse in our backyard, maybe some bunnies, and definitely more cats, because you can never have too many cats. More cats mean it'd be easier for him to find one to hold. He misses Max and Ceiba so much, and talks about them often. I've caught him talking to their ashes more than once, telling them about our new pets, but reminding them that he still loves them. If you ask, yes, he is still mad about his hair, and is back to insisting on at-home bang trims ONLY so... Read more →