It's Friday! Seems like a good day to laze out and just post random photos of my pets. 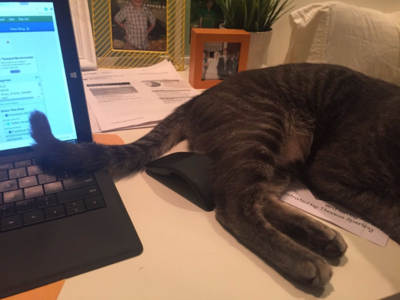 Especially since there's currently a tail on my keyboard and a butt on my mouse. 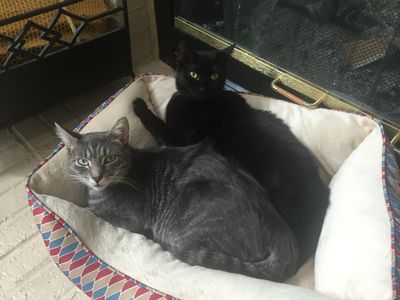 The cats have settled in, I'm happy to report. They have stopped hiding completely and now join Beau as a little troupe of shadows who follow me around all day, demanding attention, food, and lap real estate. I've never had two cats or littermates before, and it's been FOREVER since we had a cat that still acted as kitten-like as these two, so they are filling our lives with much hilarity and pratfalls. Catfalls? Ew, stop that, self. 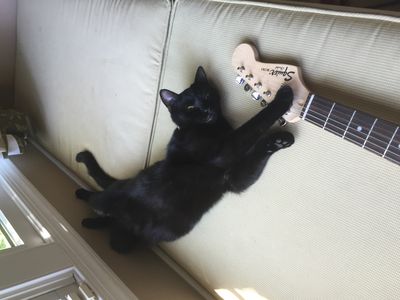 Miss Rey has managed to not fall out of anymore windows, but consistently finds other trouble to get herself into, like getting her ass stuck in an ottoman or locked in closets or falling into the toilet because she's so mesmerized by the flushing. 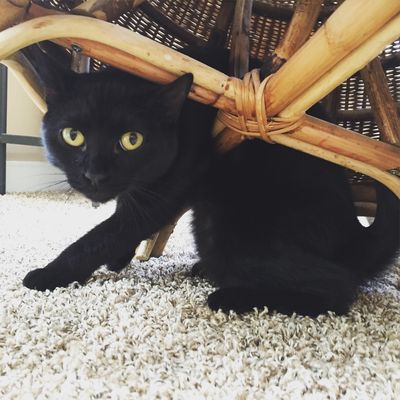 Despite her spectacular Queen Bitch Cat facial expressions, there's really no deliberate naughtiness or evil behind all her mischief. It's more like she's just kind of a klutzy airhead who doesn't understand how life works. (Oh my God, she's me.) She's...not the smartest pet in the room, if you get what I'm saying, but she's so sweet and soft and pretty that everybody loves her anyway. 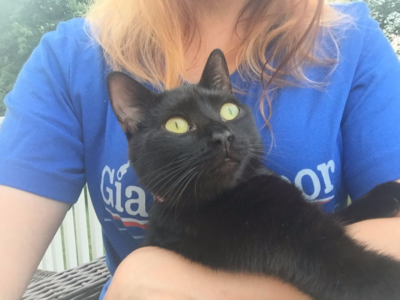 I haz no idea whatz going on.

(Giant Meteor 2016 shirt from RedBubble.com. I am all in for Hillary but the thought of having to put up with however many more months of wall-to-wall bullshit from Trump fills me with a rage that can only be soothed by dreams of a quick, fiery death.)

Rey is super playful, while Finn is a full-time lap cat. Which of course means Beau consistently chooses to ignore Rey (who would happily tussle with him any time) and antagonize poor Finn, who would really rather not be bothered. 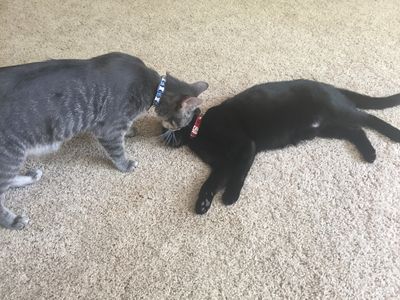 Hi sis let me give you sum kisses because I am made of love and sweetness. 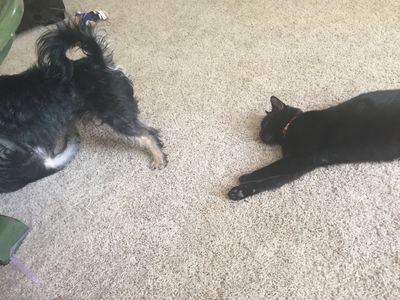 ACK NO NOT AGAIN SAVE ME SISTER. 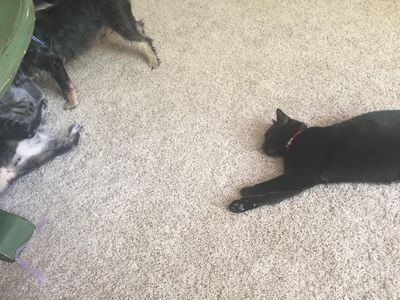 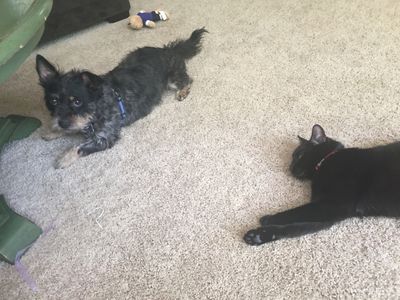 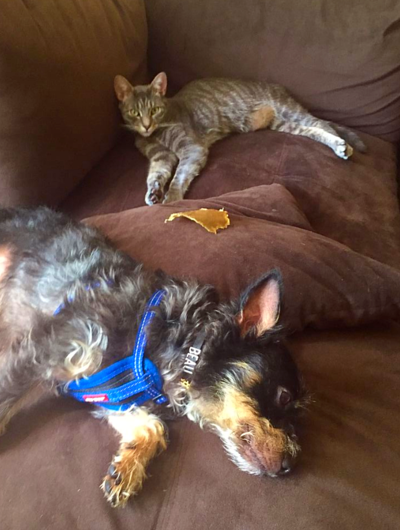 Not that Finn doesn't get up to mischief either. He refuses to follow our "stay off the kitchen counters" rule, or our "please stop licking dirty dishes in the sink" suggestion. And he's a big fan of climbing places without a clear plan for getting down. 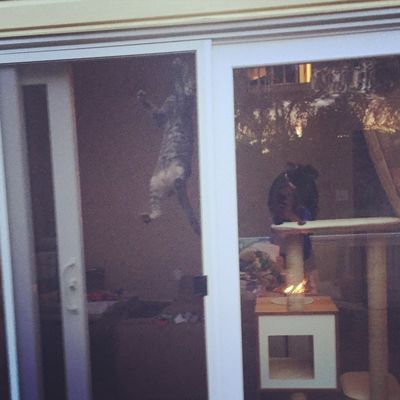 Beau definitely gets a tad jealous any time the cats are taking up all the good laps, but seems happy to have their company and someone to snuggle/wrestle with. 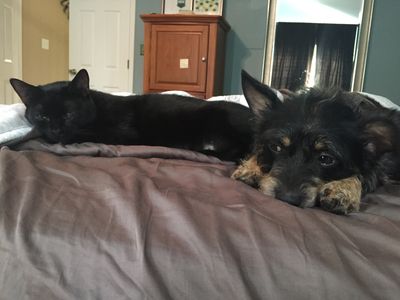 Sometimes they do both at the same time. 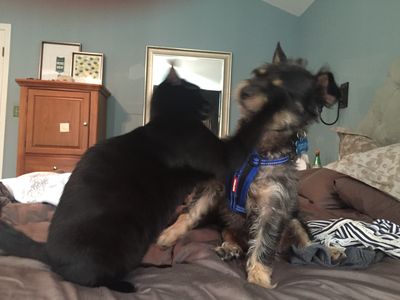 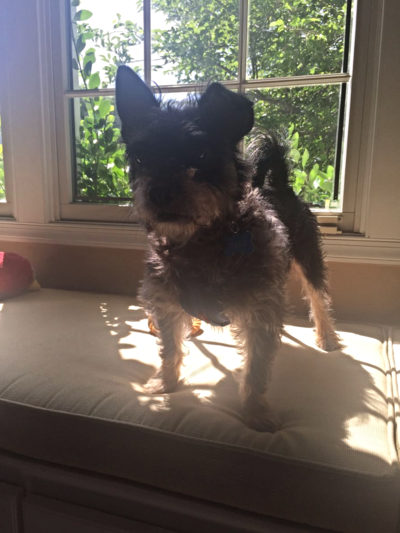 And while Beau seriously was (and is for anyone new who meets him) a case of love at first sight for us, I am amazed at how different he is now compared to those first few weeks with us. He's calmer, less anxious, and settled into our routine. He no longer runs from us or escapes, even given an accidental open-door opportunity.

(I'm an idiot who left one of the back gates open while doing some gardening out front a couple days ago, then realized Beau had been out back at some random point much later, dashed inside for his leash and a thing of string cheese because HERE WE GO AGAIN, only to find Beau sitting happily in the kitchen, waiting for the kids to drop crumbs from their afterschool snacks. He was just like, why would I run? INSIDE BE WHERE ALL THE FOOD IS AT.)

So all is well with the zoo. They are all terrific pains in the ass, each in their own unique snowflake way. And I can't imagine life without any of them.

(P.S. My full post about our trip to Hersheypark is up at AlphaMom, along with a ticket giveaway! Go check it out and enter, yo,)

So glad that the zoo has settled in nicely. Loved reading glasses you account of Hershey Park. Not commenting over there because a family needs to win!

Thank you for adopting littermates. I think cats bond better with humans when they are also bonded to each other to play and snuggle.

You know that Beau is gonna run now that you posted about it on the internet, right?

There are not enough of these posts/pictures. More pets. MORE!!!!!
(Love family and other updates too, of course. But MORE PETS. Thank you.)

You are so funny... I love the pictures and I'm so happy your family and the zoo found each other. :) have a great weekend.

Since you have chosen to bring politics to your blog, please explain why you are supporting Hillary. As a woman, I was first disappointed in her as a Stand By Your Man first lady. In the years since she has proven herself to be a liar, to change position on many topics, and has abused her position as Secretary of State for her own accumulation of wealth. Have you read the list of foreign countries and the amounts they donated to the Clinton Foundation. Can you possibly believe that she did not and will not use her position to provide benefits to those countries?

I have many friends who plan to vote for her and not one will explain what she has ever accomplished or how she has ever demonstrated leadership qualities. I am sincerely asking you to shine a light on this for me. I do not see the appeal.

come on @Bev. It was a very small mention and no one has to explain anything. She is not asking you to vote for anyone, or telling you who not to vote for. Just look at cat pictures and smile. Go to a happy place.

Two words: water bottle. A colorful one, one that the cats can see coming. After a few countertop spritz, I promise all you'll need to do from then on is pull out the water bottle and show it to him. Instant scatterfication!!! :)

(I actually appreciate Bev's mature, intelligent, straight-forward, non-confrontational question. And I'd genuinely also be interested in any likewise intelligent responses/answers. FWIW, I'm a bleeding-heart liberal (and a Christian), and I plan to vote for the kindest, most willing-to-help-others, open-minded candidate there is. My thoughts were/are that it's Clinton or Sanders or a Libertarian I thought might be running, but I really want to hear others' non-confrontational, straight-forward thoughts.)

Great animal pics, thank you! To train cats try getting a bell you can ring every time they are doing something inappropriate. The bell should be somewhat loud and placed on a the kitchen counter for easy access. Cats HATE bells. Works like a charm and will save you from having to perform screech and dive show. Good luck.

Ah....to read article about having full of love and life. Everyone should have that. Thanks for the love, love, love and love. Especially after this weekend in Orland.