This is the Birthday That Never Ends 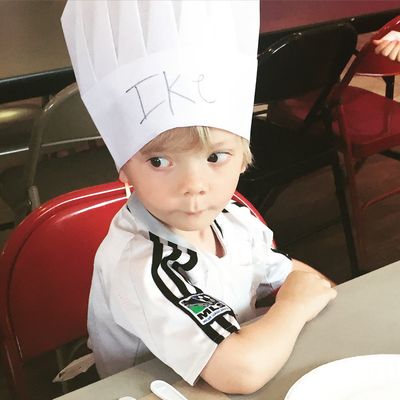 Ike had his first "real" birthday party this weekend, aka the kind of party where we sacked up and invited his entire preschool class to an actual organized party, rather than just half-assedly inviting a bunch of our friends over to barbecue and eat cupcakes in the backyard. Five years old calls for a proper birthday party, I think.

Ike chose a pizza-making party at a local restaurant, blatantly copy-catting his classmate who had the same party not that long ago. But hey, the party package included invitations, cookie decorating, pre-made goody bags and I didn't have to clean up a thing. I like how you roll, child. 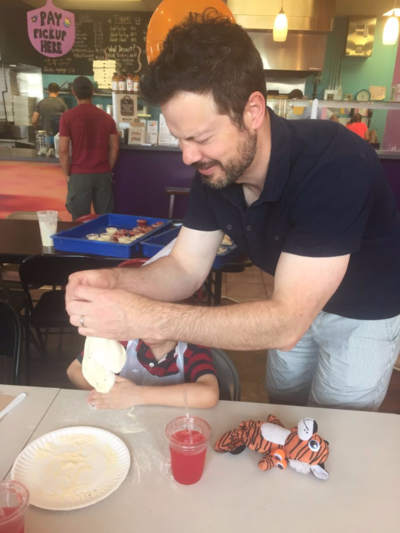 Jason did have to pitch in and help with some dough shaping, which apparently was MUCH harder than it looked, AMY, STOP LAUGHING. 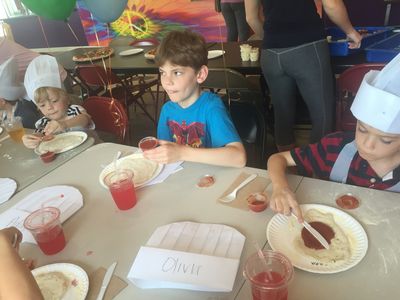 Poor Noah was having a fairly severe sensory freak-out over the tie-dye wall decor and getting flour on his hands, and also a touch of I'm too big for this shit existential crisis, but participated anyway to make Ike happy.* 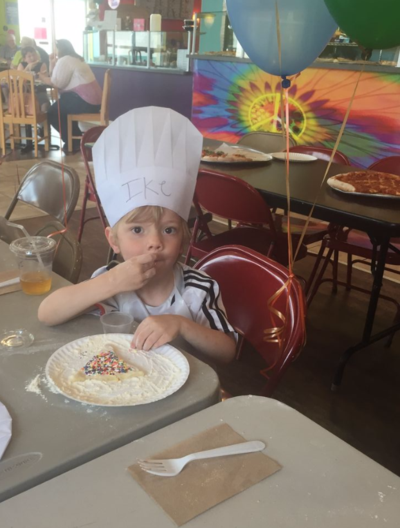 I offered Ike the choice of whatever kind of cake he wanted, figuring he'd pick something that would require a professional decorating job, but no. He wanted a plain chocolate layer cake with chocolate frosting and chocolate chips around the edges, the same birthday cake I made on his actual birthday, and several birthdays before. "The cake you make in our kitchen. That cake."

I actually bought a spray can of decorating icing, figuring I could at least like, include his name or something. But after practicing for awhile on a paper towel and being completely unable to produce anything legible (damn chihuahua hands), I gave up and brought the most basic-ass looking and slightly lopsided layer cake to the party. Like I didn't even take a picture of it, because I thought it was so boring looking. Luckily, it was DELICIOUS, the kids all went nuts over the chocolate chips for some reason, and all the parents asked for the recipe, which once again lived up to its name.

Afterwards, we took the kids to a huge music store, where we accidentally made the birthday boy cry by refusing to buy him a $2,500 clarinet, a $300 guitar AND a ukulele, which at least wasn't expensive but we already own a ukulele. 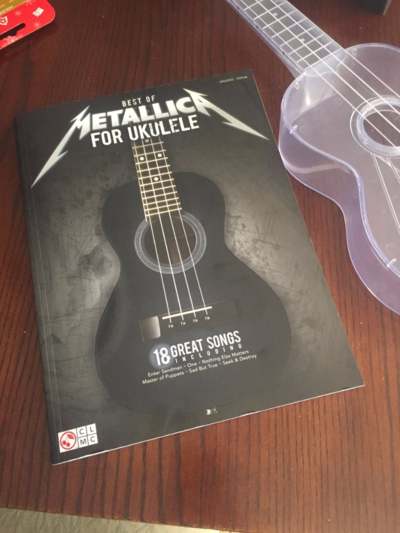 Ezra attempted to comfort Ike by promising to give him his current kid-sized guitar once he outgrows it. Then he showed us his choice of an upgrade. 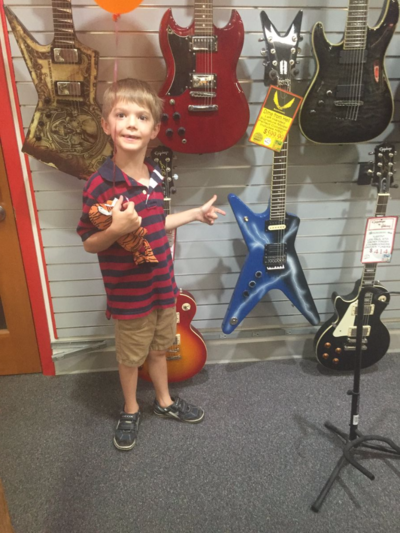 And finally, on Sunday we busted out the fire pit and tree stump seating left behind by the previous homeowners, which have all been sitting neglected under our deck since we moved it. We kept talking about using it and just...didn't for some reason. 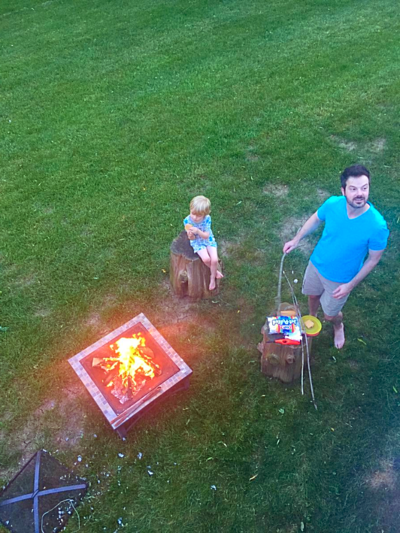 We may have been finally motivated because we desperately needed a break from the evening news and and Twitter and Facebook, and s'mores seemed like the best alternative. 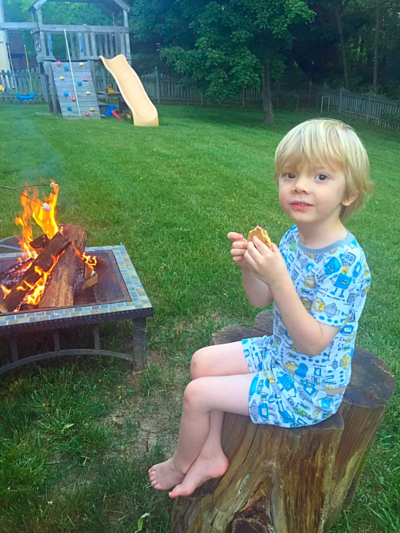 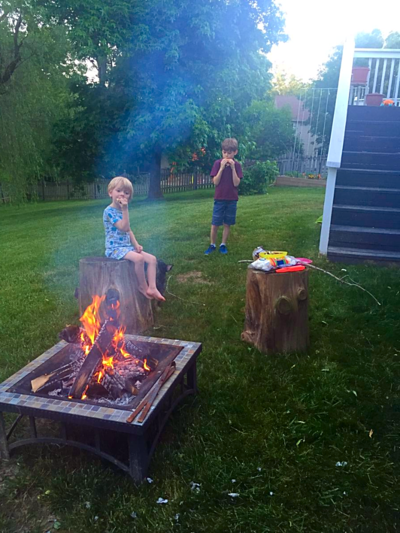 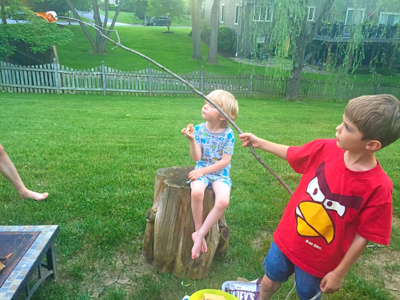 It was really fun. Am looking forward to a lot more nights around it, hanging with boys who still want homemade chocolate birthday cakes and backward pajama s'mores.

*And also because we cut a desperate bargain and told him if he held it together we'd let him watch one of the godawful Michael Bay Transformers explosion-o-thons that night. We've been telling him he couldn't watch them because they're PG-13 and also hot garbage, and now he will never trust our judgement in film again, because it was the greatest hot garbage he's apparently ever seen in his life.

As the oldest of 3 girls, I feel your pain, Noah! I had to act like I was having fun at my younger sisters parties too. But there was no movies offered for my trouble. My mother was of the suck it up buttercup and don't you compliance about it either school. I still want to come over and just sit by the fire! The kids can have all of my s'mores!

That last paragraph made me laugh out loud for real, something I desperately needed today. Thank you. Hot garbage, indeed.

Your backyard is amazing! So jealous.

Have same fire pit. Thought you'd like to know, heh heh. :) As always, you make me laugh!

How is that child five? I do not even know.

(That was me, laying my head on my desk is utter despair over the passing of time, sunrise, sunset.)

Happy birthday, Ike. That is one long-legged baby you have there.

Those boys are just so delicious!! Happy birthday, Ike!

Your family is fabulous, and Jason's dough (doh!) face is hilarious

Okay-I have a non birthday related question- so Noah can hold it together for bribes/special occasions? I ask because I'm just getting my girl evaluated for add, and had to do it through a dr, not school, because she is apparently never losing it at school,her grades are good (it's grade one so...) her teacher is flummoxed by my suggestion of sensory issues/focus problems, but my guess is she's holding it together at school and then losing at home because she's spent all day holding it all in, and home is a safe space, but then also I'm like how can that be true???? maybe school is just better than me????