Yet Another Case of the Mondays

In retrospect, I'm not sure why I thought it would be a good idea to schedule a doctor's appointment on the same morning Ike started summer camp.

I mean, I can see it from the perspective of a normal human being, like:

1) Ike's summer camp is basically no different than Ike's preschool, except we walk in a different door to a different classroom.

2) The doctor's office is only five minutes away from Ike's summer camp.

THEREFORE AND ERGO, it is perfectly reasonable to assume that I should easily be able to drop Ike off at 9:30 and be on time for a 10:00 appointment, barring some kind of never-ending string of minor timesucking disasters.

Minor timesucking disaster #1 occurred when they called to confirm my appointment and cheerfully informed me that, as a new patient, I actually needed to arrive no later than 9:30. In my head I went "hmm" but my mouth agreed that sure, I will be in two places at once, no problem.

Disaster #2 occurred when I waited until this morning to look at the list of items Ike needed to bring to camp. I'd remembered to pack his lunch but forgot about all the little details like "a clean bathing suit" or "a beach towel that isn't currently mildewing in a wet pile in the laundry room." I needed to sign a permission slip and put on sunscreen and pack a change of clothes and find a water bottle that hadn't accidentally been put in the dishwasher and melted.

So naturally, all those tasks took multiple seconds and even a couple whole minutes, which meant by the time we got out the door we were already failing at my goal of a prompt 9:30 arrival time, and thus my hope of being closer to "on time" to "totally not on time" for my appointment.

But still! It was going to be okay, provided not a single extra thing happened on the way to camp and that Ike was game for a slow-speed tuck-and-roll car exit while I threw his tote bag and towel after him.

Perfect time for Disaster #3, and something of a specialty of mine: The car was almost completely out of gas.

See, the little screen-y thing that tells me the car's distance to empty has been taken over by an annoying reminder to change the oil. Which I am ignoring because it's WRONG, I do not need to change the oil yet, I just need to figure out how to turn off the reminder and reset the "MAINTENANCE REQUIRED" light on the dashboard that I am also ignoring. Unfortunately that light is directly next to the GET SOME GAS, STUPID light, so I didn't notice that light was even on because hi, I am a super good ignorer of things. After hitting a couple buttons I confirmed that I had less than two mile's worth of gas and absolutely had to stop on the way to camp.

Okay, FINE. The gas station isn't that far out of the way, and as long as I only get a few gallons' worth that shouldn't suck up too much time. Look! Here we are at camp already! So as long as nothing else happe...oh my fucking hell I left Ike's lunch and water bottle on the fucking kitchen counter.

At this point I was mumbling audibly to myself, like Amy, where the hell is your shit and why can't you get it together, NONE OF THIS IS THAT HARD.

In my thoroughly flustered state I was completely unable to find the camp sign-in sheet and ended up signing my initials on a random piece of paper that was NOT the camp sign-in sheet, quickly explained that I would be back with his lunch and water bottle shortly and then going to the doctor to get my brain checked.

(Lie: I actually just went to the gynecologist.)

I arrived at 10:04, apologizing profusely before being told I didn't actually HAVE an appointment this morning. In a remarkable display of strength and fortitude, I did NOT immediately point behind the receptionist's head, scream LOOK OUT THAT SQUIRREL'S GOT A KNIFE, then run back to my car in shame to cry. Instead, I pulled out my confirmation email with trembling hands of no-confidence, and eventually we figured out that the computer system thought my name was Ms. Storch Amy Corbett and I was, indeed, late as all fuck for my appointment.

They got me in, and I am happy to report that all is well with my boobs and vagina (I know how you worry) and also my heart, as this office offers a short screening thing to find out if you're at risk for heart problems. 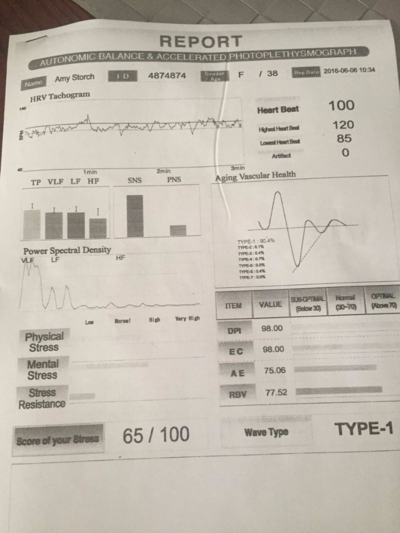 I have no idea what any of that means, except that it's all very good and excellent...although I'm just now noticing that the bar for "Mental Stress" creeps all the way up to "High." Which: Obviously.  So at least one vital organ of mine is doing it's damn job. Shame it's not the one in charge of remembering to get gas or lunches or where I left my keys.

and need to go lie down for a mental stress nap.

Those "your appointment is at 8:30, arrive at 8:15" things make me crazy. They also make me terribly early because my German ancestry will not allow me to be late for anything, so my brain only processes 8:15, and to avoid the crime of lateness, I arrive at 7:50, and nobody knows what to do with me. I have spent a good part of my life waiting.

I'd be ok with 'arrive 15 minutes early' if it meant there was even a chance I'd get my actual appointment at it's actual time.

Judy, I am right there with you. I can never just arrive on time. And I absolutely loved that scene from Kimmy--I have thought it many a time and in the same tone of voice. You totally deserve a nap.

I do believe you were actually describing MY first morning of summer camp experiences.

Where are the water bottles?
Is this sunblock any good?
TOWELS!
Swimsuits are stupid.
I did all of the things.
NAP.

Bonus - one year I only needed them to be at camp from noon to 3, since I went in at noon, and my husband gets off at 3. Oh, no problem! Totally can do noon to 3. See you at such a time on such a date.

So, I show up on the first hot day with all this...nature around me, and no one is there. All gone, door locked, whachu talkin'bout style crickets chirping and everything. Turns out they all went for a walk! Yay! I certainly don't mind waiting around in my work clothing sweating and stumped. For a HALF HOUR. Thanks.

Wow - suppressed anger much? This was probably 4 years ago now. Shudder.

Hope tomorrow treats you to a better morning. And an ice cream cone.

I am so glad I am not the only one who does these things. So me. Last time I ignored all the gauge things in the car ... it stalled mid driving, I was lucky I was not in the highway! I was down 3-4 quarts or oil. Meh. We were lucky the engine didn't seize! Damn water bottles, sunscreen towels and swim suits:/ Why is camp harder than school? Sigh. Glad to hear you are healthy and better luck tomorrow!;)

Welp, on the first day of my son's summer camp this morning they had to call and remind me to, you know, pick him up.

Oh, and this camp was at my children's school, where I am the treasurer of the PTA, so all the staff KNOWS who I am. I was late to pick up my other child twice in the last month of school so basically I assume the entire building's worth of staff now thinks of me as "that flaky mom who can't remember to get her children."

Yay for healthy boobs, tho.

Ugh I had the exact same kind of day. Stupid Mondays.

You drive a Sienna, right? The one I had, you reset the change oil light by pushing or twisting the little knob that sticks out by the odometer. You'll have to google it, but it's really easy, and then you'll have accomplished something tomorrow. :)

So happy to know I am not the only person who has days like this! Hope the afternoon went smoothly!

The "breathtaking dumbness" posts are my favorites. Thank you for sharing!

This makes me feel a little bit better that it's not just me. I found out last night that I enrolled my kids in swim lessons this week and then wrote it on my calendar for next week and even though my friend who is also in the class texted me on Monday with Hey there, WHY ARE YOU NOT HERE I was too busy to read past the "Hey there" and now my kids have missed 2 of their 9 days of swim lessons and will most definitely not pass the course because of me. Also because they suck at swimming, but mostly because of me. Anyway, thanks for making me feel a bit better.