Yet Another Reason I Require Constant Adult Supervision

Jason spent almost the entire weekend at work, supporting a round-the-clock launch of multiple Very Important Website-y Things or Something Or Other, I Dunno. Like, they booked him a hotel downtown and everything, although they probably shouldn't have bothered, as I got a text message announcing his arrival (and intention to grab a couple hours of sleep before heading back to the office) at 5:35 a.m. on Sunday morning.

Thus the boys and I were left to our own devices, and given some Recent Events and Experiences, I mostly opted to not venture outside, or attempt doing anything at all, besides a shit-ton of laundry and Netflix. 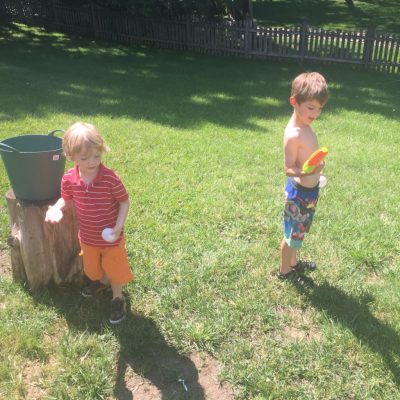 (And a water balloon/water pistol fight. WHICH I WON.)

Specifically, Orange is the New Black, which I KNOW came out like, five million Internet weeks ago but I was trying to patiently wait until Jason's job allowed him to join me on a binge-watch session.

Unfortunately for poor J, I reached the end of my patience rope this weekend and texted him the following warning shot: 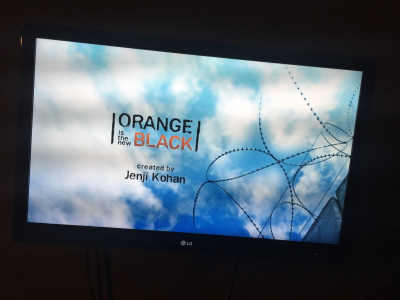 And even more unfortunately for J (and several other people who are all probably very sorry they ever gave me their phone numbers), I'd ALSO hit some kind of stir-crazy wall of ultra-easily-amused boredom, when this happened: 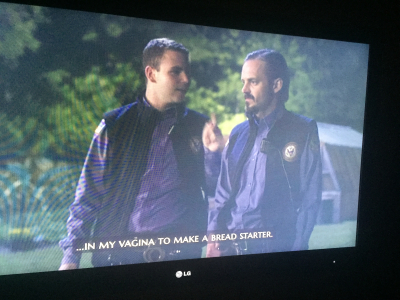 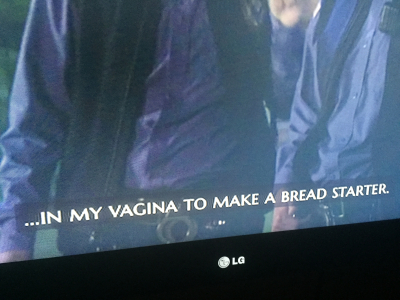 Something went awry with the episode's Spanish translation subtitles, and this one just...stuck around. And naturally, instead of being a grown-ass adult who would maybe reach for the remote and figure out how to fix it, I proceeded to take four million photos of every scene, every character, captioned with IN MY VAGINA TO MAKE A BREAD STARTER. 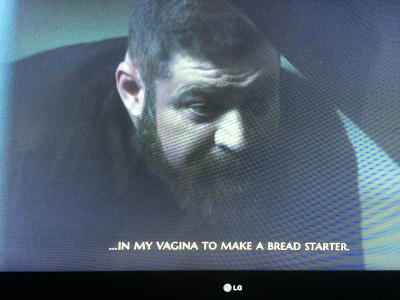 I'm putting the rest of this post behind a break because 1) minor spoilers for the first episode of the newest season of OINTB, I suppose, but mostly 2) I'm aware this is not nearly as funny to anyone else, and seriously, it's just a bunch of blurry photos of my TV captioned with IN MY VAGINA TO MAKE A BREAD STARTER. That's it. That's the whole joke. I've got literally nothing else. 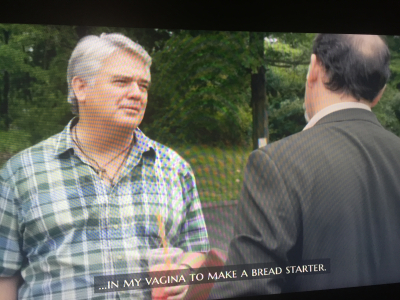 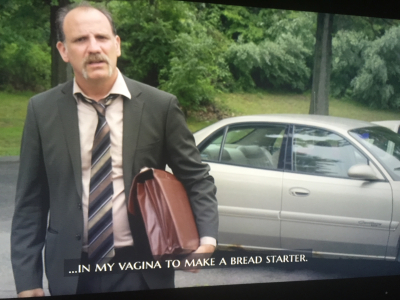 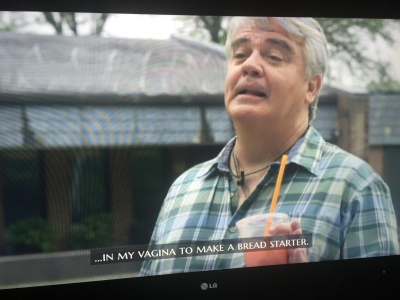 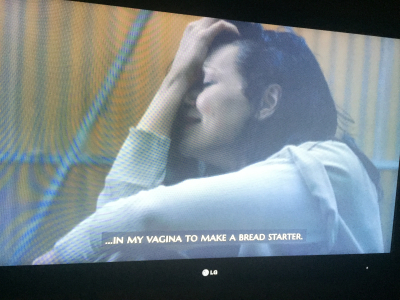 Alex gets it. The struggle is real, tho. 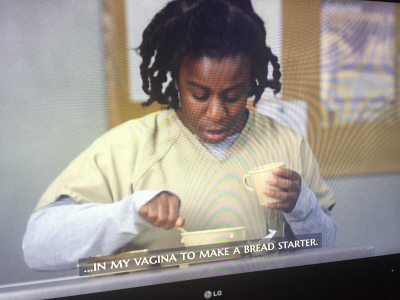 (Not such a non sequitur with this one, honestly. Moving on.) 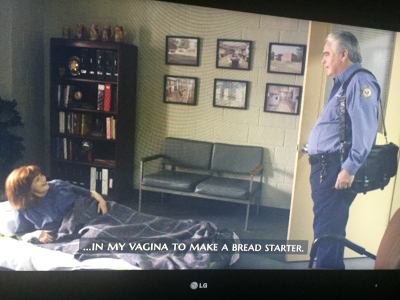 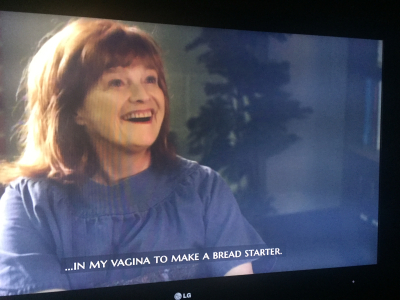 At this point, no, I wasn't even paying attention to the real plot, but was fully invested in my own original storyline about a prison-wide yeast infection. 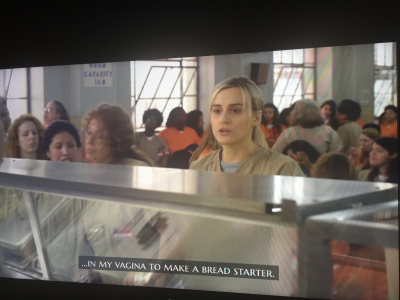 Obviously, it was all Chapman's fault. Christ Chapman, you suck. 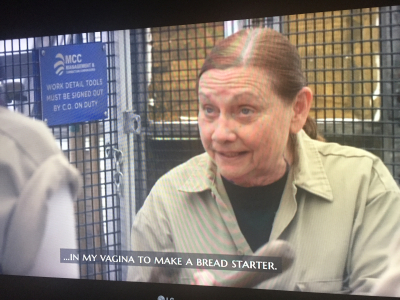 And you know dis bish ain't gonna stand for it, either. 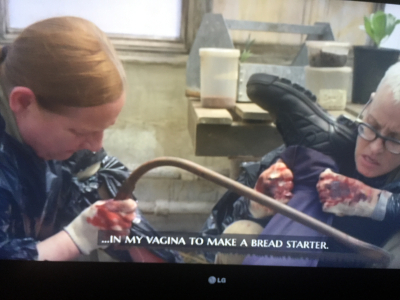 Did it become less funny to me once the blood and gore started? No, it absolutely did not, but I realized I was entering spoiler territory for my poor, long-suffering texting audience and decided to STFU.

In summary, it doesn't matter if I leave the house or stay home. I am clearly a disaster either way.

Bahaha. This is why I wish we could be RL friends. :D

I don't even watch OITNB, but that makes it worth watching now.

This is awesome, but I don't understand... did you watch in spanish with english subtitles? In your vagina to make a bread starter?

I would do the exact same thing! Now I need to go back and watch the first episode again to see if this is actually something that is said.

I would do the exact same thing! Now I need to go back and watch the first episode again to see if this is actually something that is said.

I don't watch OITNB, but I totally relate to finding it way more funny than is appropriate when subtitles go inappropriately wrong. For instance, we usually leave the subtitles on all the time because I have audio processing issues and I can't sort between what's being said on the TV in front of me and what's being sung by the stupid ass musical toy that my in-laws gave our toddler... I digress. I just wanted to share that we recently discovered Big Comfy Couch on Amazon Prime. And THEN we discovered that some of the caption typer people got extremely lazy and/or belligerent, because according to the subtitles, Granny Garbanzo has dropped the F-bomb more than once. But we haven't gone so far as to screen shot it. We just rewind, pause, and laugh until our toddler asks for the music to resume.

It works as a tagline for every fortune cookie too. Try it the next time you get takeout!

It made me laugh! And, the fortune cookie suggestion too! Now, I'm going to go make some bread!

@Jacquie I watch in English but a lot of the characters speak Spanish (or Russian, or other languages) which gets translated via subtitles. For some reason THIS was the line of dialogue that just...stuck.

(Stuck...in my vagina to make a bread starter)

I am rolling around chortling because l also waited as long as l could to binge on OITNB and these screenshots are *awesome*. Spanish translation error, FTW!

So funny I giggled out loud and I've got a baby on my arm who I just finally got to sleep but still kept reading the post.
"willing to risk waking up baby" fun means very fun indeed ;)

Thank you so very much for the laugh! I so badly needed it.

Right now, some chef that fancies themselves avant garde is reading this, nodding, and agreeing that THIS is the idea that will get them coveted write-ups in national publications. THANKS AMY.

My entire life is dick jokes. This shit is hilarious!