This post is sponsored by Wisdom Panel® Canine DNA Tests.

Beau's original adoption listing said he was a mix of Miniature Schnauzer and Yorkshire Terrier. We have no idea if his owners gave that description when they surrendered him to the shelter, or if it was just a guess made by a vet or the rescue group or what. We do know that the "Schnauzer" part seemed to mostly be based on his pre-haircut appearance, because once his fur was groomed it was clear his actual snout wasn't all that Schnauzer-like after all.

His foster mom agreed, and added her personal guess of terrier breeds mixed with wire-haired Dachshund, based on his legs and feet. Our vet said he was all terrier: Yorkie, Jack Russell, Cairn, and probably a good smattering of others. When I would play around with online tools and surveys based on his physical appearance, I would get wildly weird results, like Pomeranian and Shih Tzu.

The guessing game can be fun at first, but also hugely frustrating. What ARE you, dog?

I've been sent photos of several Beau doppelgangers from all over the country -- crazy identical pups, right down to eyebrow coloring and the flippy floppy ears. And I would immediately ask the same question everybody asks us: WHAT KIND OF DOG IS THAT?

And their answer would always be the same as ours: No idea. A mixed breed of unknown origins. Sure is cute, though.

Quite a few readers/followers suggested we try testing Beau's DNA with a kit from Wisdom Panel, and I very literally had my finger on the order button when I was asked if I'd like to participate in a sponsored campaign. (Oh how I love when that happens!) Um, yes. YES I VERY MUCH WOULD. 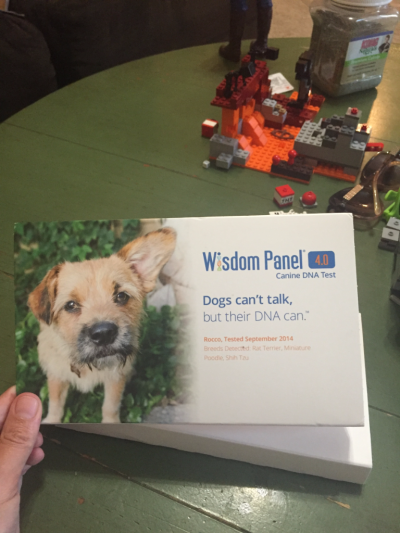 The kit arrived, we cleared away some Legos, swabbed the inside of Beau's cheek while he sat there looking rather confused, then sealed up the samples and dropped it right in the mailbox.

A couple weeks later, an email arrived with a link to Beau's full results, and we had our Big Answer: 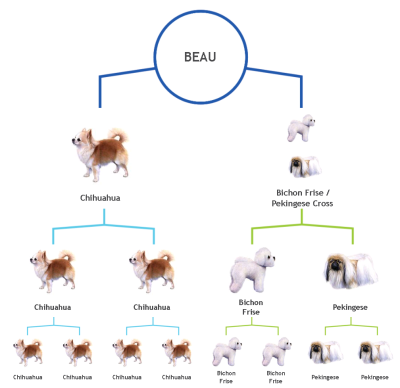 Beau is half Chihuahua. HALF CHIHUAHUA. And then a mix of Bichon Frise and Pekingese. Three breeds that never came up as possibilities; breeds no one ever guessed.

And yet, there is is. Genetics are so unbelievably fascinating. 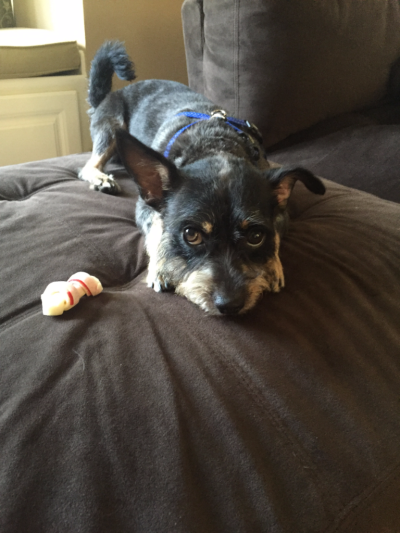 Beau got a super-short summer haircut this weekend, and we all mildly freaked out because he looks like a completely different dog now. He looks so much smaller without all his fluff, and yes, he looks A LOT like a Chihuahua. With a Bichon face and Pekingese paws.

(I've been doing a LOT of Google Image Searching for dogs lately, yes.)

The irony here is delicious: I spent the entirety of Ceiba's life correcting people who assumed she was a Chihuahua. EVERYONE always thought she was a Chihuahua. No! I am not Paris Hilton! She's a Miniature Pinscher! A completely different kind of yappy little rat dog, thank you very much. 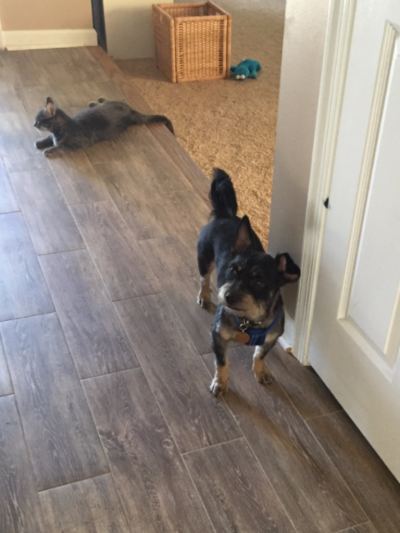 And now I've got a secret half-Chihuahua in disguise. The only correct response here is "LOL."

All this to say, huge thumbs up to Wisdom Panel, and I highly HIGHLY recommend anyone with a mystery mutt give them a try. Or even if you think you know, there might be some surprises going back a generation or two. And it's more than just for entertainment or bet-settling, since knowing exactly what breeds you're dealing with can be really helpful for behavior, training and health purposes. We now have a better idea of what a healthy adult weight really is for Beau, for example, and he tested negative for a couple gene mutations, including MDR1. And all three of Beau's breeds are big on reward-based training, which: YEP.

(Guess who accidentally got out last night for the first time in ages! Guess who came right back the second I called for him! I am officially the dog whisperer of string-cheese-based training.) 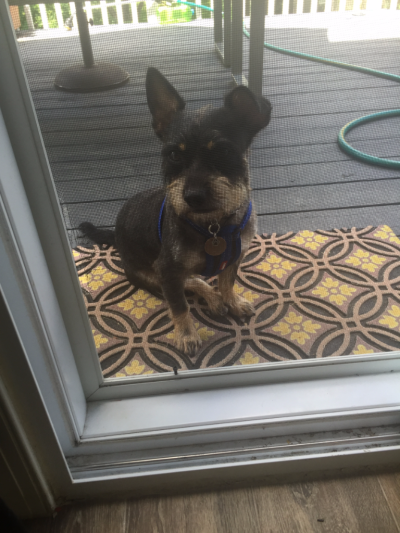 Thanks to Wisdom Panel for sponsoring this post, and for solving the Mystery of Beau, the amazing Cheek-a-Chon wonder dog Follow this link to order your own DNA kit!

Well in that case...

Can I caveat this? The Wisdom Panel only has 200 or so breeds. I know this because we think our dog is a French Spaniel or a Dutch Partridge hound. I got my husband the Wisdom Panel for Christmas, got the results and the answer was...English springer spaniel! We then looked and realized our 2 guesses are not tested for. :(

HOWEVER, it was still really fun! Also, much like Beau, our beautiful whatever she is has a much more, shall we say, adventurous side of the family. I love how they put all the mixed dog breeds on one side!

I have a bichon!

Hmmm...I know someone who has tested three dogs and every one of them come back part chihuahua.

When I first rescued our mutt, who was billed as a shepherd /beagle mix, he was a little brindled brown ball o'fur. I thought, shepherd? Shepherds are not brindled, must be a boxer/beagle. Then my friend told me about Dutch shepherds, which are brindled, right about the time his ears started perking up and his snout spouted. The beagle is a NOPE.
We now think our very handsome tiger-striped dog is a Dutch shepherd/mountain cur* mix. Had never heard of either breed before, despite being the kind of person who can identify a Gordon Setter or a Keyshound. I had been thinking about DNA testing, but Lindsey's point is well taken.
*Turns out there was an irresponsible local Dutchie breeder, so mixes around here are more common than you'd think. Lots of curs, too, which I always thought was a Shakepearean insult. Huh.

And today's comic is 100% appropriate!

We have a bichon/pekingese mix. Sweet, fun little dog. Loves kids and loves to play.

We have a bichon/pekingese mix. Sweet, fun little dog. Loves kids and loves to play.

My dog was advertised as a basset/beagle mix. I did the wisdom panel, and NOPE - Norwegian Elkhound. Whaaaaatttt? It is a lot of fun if you are obsessed with your dog.

When I adopted our dog, the shelter claimed she was a "small lab mix", and we were specifically looking for something like that. Turns out she's actually Amstaff terrier, and Chinese Crested. Not even kind-of-sort-of a lab. But that's okay, I love her to bits anyway. Getting the DNA from Wisdom Panel really helped us with training and with weight -- she's only 26 pounds, but that's spot-on according to the DNA test. The vet was concerned she wasn't big enough for "a lab mix" but after I gave her a copy of the DNA results she agreed.

Worth the money for sure.

I never would have guessed that combo. I wish that service was around when my mutt was alive. We could never figure out what he was. Part chihuahua, miniature pinscher, dachshund, etc. we never knew. Like Beau, he was adorbs, and that's all that mattered, but I always wanted an answer.

We did Wisdom Panel with our mutt too because I *had* to know. Turned out that our "beagle mix" who has the build of a pitty is half miniature poodle. Half of every great-grandparent pair was a miniature poodle so I'm 99.99% sure he's the end result of a backyard breeder of -oodles not bothering to spay/neuter their unsold dogs. It was great to find out though since a lot of his personality traits are classic poodle (that and I love the expression on people's face when they ask what kind of dog he is and we say he's half poodle).

Also, I'm not surprised about all the lab mixes that weren't. If you talk to animal rescue people many of them freely admit that anything that could possibly be a "lab mix" gets labeled as such because a> they're such a common breed that it's plausible and b. it's a breed that most people are familiar/comfortable with.

We did this for our dog when we adopted him because we had so many opinions on what he might be- collie, lab, shepherd, husky, the list goes on forever.

The test said he was predominantly dachshund. He weighs 90s pounds and has absurdly long legs.

How interesting! If you did one of those for cats the results would just say "100% EXTRATERRESTRIAL ALIEN SPACE CREATURE." Which we all know anyway. Your outside mat is super cute! Where'd you get it?

Beau is so much cuter than all those dogs! I mean, personally, because my opinion counts, chihuahuas are nonsensical, bichon-frises are silly, and pomeranians are pointless. But Beau - he's a cool dog. Mutts for the win.

Hi Amy,
I recently went to NOLA and was bombarded by millions of images of George Rodrigue's 'Blue Dog' Tiffany. This was about exactly the time you found out about Beau's *genetics*...of course, George just surmised that his Tiffany was 'terrier/spaniel' but if you look at Beau and 'Blue Dog' there is no denying they share a lot of genetics! Betta 'Blue Dog' is exactly a Beau...check out the 'Top Dog' prints or any of them...they do point their opposite ears...but short legs and the same look abounds! :)Pretty telling. LOL Thanks for always being on the cutting edge of pushing all of us a little further out of our comfort zones! :) Keep blogging even though not many are these days! The world is better because of YOU!!!!!!

He has the same tail as my chihuahua mix, so I suspected there was some chihuahua in him. I'd love to get my boy tested, because he was sold to me as all chihuahua, but he's very obviously not.