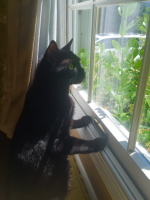 Yet Another Important Update On The Ongoing Cat/Box Situation: Somebody peed in the box. So now nobody gets to play in the box anymore, this is why you can have nice box things, you are gross guys, etc. Of course, the matter of WHO peed in the box is a mystery for the ages. So many bladders, so much nonsense. Speaking of mysteries (and nonsense), can someone tell me WTF this is? This is in our upstairs hall linen closet. It is some sort of pushable red button up near the top shelf. It has mystified us all ever since we moved in, although we have (SO FAR) all managed to resist the urge to PUSH THE RED BUTTON, OH GO ON PUSH IT, JUST SEEEEEEE, WHAT'S THE WORST THAT COULD HAPPENNNNNN? We didn't notice it during the inspection or anything and mostly forget that it's there but then I go to get some towels and I'm like guuuuuuuhhhhhwannapushwannapush. All my Google searches for "WEIRD RED BUTTON IN CLOSET WHAT DOES IT DO" and a million other variations have turned up...um, exactly nothing helpful. My first guess was some kind of panic button, as the previous owners did install a... Read more →

Posted at 11:46 AM in breathtaking dumbness, houseness | Permalink | Comments (71)

The Garage Door of Existential Dread 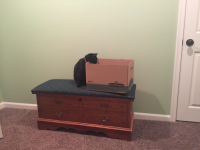 I had a weird dream last night -- not VERY weird, as my weirdest weird-ass dreams go, but still -- where I looked out my front door to discover that one of our garage doors was sitting at the far end of the driveway, banged up to hell. I ran outside and a crowd of neighbors had already gathered, explaining that this sort of thing "happens all the time," thanks to a crazy woman in the neighborhood who likes to pull into empty, open garage door bays in hopes of sneaking into houses and wandering around.* Sometimes, they said, she'll close the garage behind her to hide her car, then back out in a panic before you catch her, destroying the door in the process. "You should keep your garage doors closed," they said. "So I should call the police," I said. "Nah," they said. "It happens all the time. What's the point?" Then I noticed a crew was already working on repairs -- an oddly oversized crew I had not called or hired, veering things into Money Pit-fueled anxiety dream territory -- but who assured me I didn't need a rate quote or anything because they "had the best... Read more → 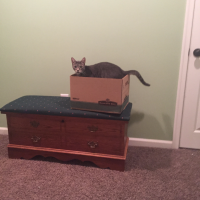 So I'm in my office right now, admittedly drowning in work and emails and procrastination-fueled idiocy, and Rey is asleep on the guest bed right next to me. She's been there almost all day, as Miss Princess Tubberbutt has settled nicely into her life of leisure here. That spot allows her to come over for human attention without walking more than two steps, and lets her know the SECOND I stand up to maybe possibly head to the kitchen and put more food in her bowl. A few minutes ago, Finn walked in, clearly stressed out as all hell. He meowed over and over at me, then came over, got up on his hind legs and started tapping my arm with his paw, like hey hey hey listen listen listen. I thought maybe he was hungry (he eats even more than Rey but of course remains a svelte silver fox, going full George Clooney while his sister will probably get cast as his mom in the movie of their lives), but there was something extra frantic about him. "Are you looking for your girl?" I asked, and pointed to Rey on the bed. His eyes followed my arm and he... Read more →

Off the Deep End 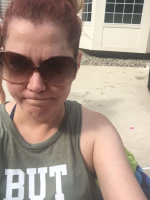 By Friday night, things felt distinctly more "back to normal" around here, that is to say, a complete and utter disaster of my own making. Ike had been invited to a birthday party at a friend's house, and while the invitation clearly said "pool party," I was weirdly plagued with doubt as to what that actually meant, as I have not attended a pool party since probably junior high. Like, is it a real pool? Or something more like we would do, which would fill up a kiddie pool and set up an off-brand Slip n' Slide in the backyard? Am I supposed to wear a bathing suit, or just Ike? But all I own are bikinis? Is that inappropriate? WHAT'S THE ETIQUETTE HERE I'VE COMPLETELY FORGOTTEN HOW TO SUBURB. I also realized that since moving, no one has come across any of our pool or beach-related gear, including floaties or backpacks or goggles or pool noodles or any of the 20 million sand toys we own. I made another last-ditch effort to find it all in the storage area before giving up and thus showing up to the pool party (YES IT WAS A REAL POOL WHO HONESTLY THINKS... Read more → 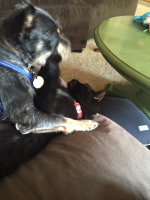 I don't know, guys. Has this week kind of done anyone else in? Especially after all those other weeks? I keep coming here, staring at a blank New Post page for awhile before realizing I'm completely out of words. I don't have an impassioned opinion piece or moving tribute or even some half-baked political rant in me anywhere. I just want shit to stop. All the shit. Just...could you not, shit? Anymore? Can I open a news app just one morning without having to read about more shit? Followed by a news cycle's worth of having to read some other shithead's shitty reaction/opinion/total-non-solution to the shit? Shit, I'm tired. I downloaded Pokemon GO on Monday morning mostly because I didn't know what else to do. At least I'm walking more? My backyard is lousy with Rattatas. But I also discovered a half dozen raspberry bushes just beyond our fence in the backyard, loaded with ripe, delicious fruit. I had no idea. So we have a lot of raspberries now. For the first time in their lives, my children are becoming aware of what's happening in the world. The election, in particular, is stressing them out. They overheard someone on TV... Read more → 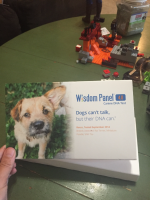 This post is sponsored by Wisdom Panel® Canine DNA Tests. Beau's original adoption listing said he was a mix of Miniature Schnauzer and Yorkshire Terrier. We have no idea if his owners gave that description when they surrendered him to the shelter, or if it was just a guess made by a vet or the rescue group or what. We do know that the "Schnauzer" part seemed to mostly be based on his pre-haircut appearance, because once his fur was groomed it was clear his actual snout wasn't all that Schnauzer-like after all. His foster mom agreed, and added her personal guess of terrier breeds mixed with wire-haired Dachshund, based on his legs and feet. Our vet said he was all terrier: Yorkie, Jack Russell, Cairn, and probably a good smattering of others. When I would play around with online tools and surveys based on his physical appearance, I would get wildly weird results, like Pomeranian and Shih Tzu. The guessing game can be fun at first, but also hugely frustrating. What ARE you, dog? I've been sent photos of several Beau doppelgangers from all over the country -- crazy identical pups, right down to eyebrow coloring and the flippy... Read more →

The Downsides of Upsizing

In the weeks after adopting Beau, I became super-hyper-conscious of how many damn exit points there are in our new(ish?) house. Our old house had two doors and one gate, and you could stand in a single spot in the foyer and get the open/close status on all three at once. Now there are five different doors that lead to the outside, spread across three different levels. Three doors lead to the backyard, where there are then two different gates that could possibly be open, on complete opposite sides of the yard. One doors to the garage, where there are two more doors to worry about, especially since one of our neighbor's garage remotes accidentally opens ours by some weird cross-signal coding glitch. The front door has a storm door back-up, but that's useless unless it's locked because Beau quickly figured out he could push it open with his front legs and bolt to freedom, terrible freedom. For awhile there, our house felt more like some algebraic danger map of escape routes and combinations -- check that door, then the door after that, run from window to window to confirm gates are latched, solve for X, divide by π, multiply... Read more → 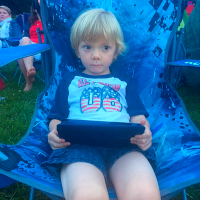 Happy belated Fourth of July! We decided to try something a little different this year -- a picnic and symphony orchestra concert at a local park, followed by fireworks. Kids were SUPER into it. Clearly. (Weary sigh.) I figured there'd be SOME downtime where the kids might need some please-stop-wandering-and-stay-on-the-blanket tethering entertainment, but unfortunately they powered through all the sandwiches and snacks and an entire case of juice pouches within the first 30 minutes. And we still had about three and a half hours to go before fireworks. There was a Star Wars melody at some point (aka the point during which I was stuck in an obscenely long bathroom line) and Jason reported that they did in fact look up from the warm glowy glowboxes and deem it "cool." Then they all asked if we could watch the fireworks from the parking lot instead, because they always sit on top of the car for fireworks. What's this picnic blanket shit? Why were we messing with tradition? In the end, it was a great fireworks show and everybody enjoyed it. (The hour-and-a-half wait to get out of the parking lot, however, not so much. Probably should've listened to the kids... Read more →