So I'm in my office right now, admittedly drowning in work and emails and procrastination-fueled idiocy, and Rey is asleep on the guest bed right next to me. She's been there almost all day, as Miss Princess Tubberbutt has settled nicely into her life of leisure here. That spot allows her to come over for human attention without walking more than two steps, and lets her know the SECOND I stand up to maybe possibly head to the kitchen and put more food in her bowl.

A few minutes ago, Finn walked in, clearly stressed out as all hell. He meowed over and over at me, then came over, got up on his hind legs and started tapping my arm with his paw, like hey hey hey listen listen listen. I thought maybe he was hungry (he eats even more than Rey but of course remains a svelte silver fox, going full George Clooney while his sister will probably get cast as his mom in the movie of their lives), but there was something extra frantic about him.

"Are you looking for your girl?" I asked, and pointed to Rey on the bed.

His eyes followed my arm and he immediately relaxed and stopped meowing. They nuzzled and he licked her face, and batted away her paw when she wanted him to stop. He HAD been looking her. And he'd been worried.

I tried to take a picture but there was too much prominent cat butthole going on.

Anyway. It was pretty cute. And that's all I've got.

Now Finn is inside a box. 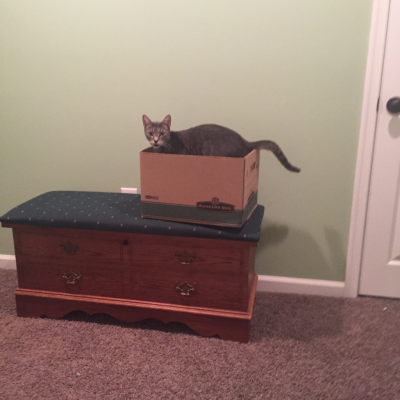 I really don't understand why I'm not getting more work done these days.

As for getting work done, meh.

I got nuthin' else.

"prominent cat butthole"
I snorted at this one :)

I have started calling Savannah the Howler Cat. She must sing the song of her people at 3freakingAM. Her brother useta yowl for her, so maybe after him moving on to the Rainbow Bridge over a year ago, she is taking up the call. I don't know, but I am about ready to remove her meower!!

I had littermates for a long time, and they did this too. Always concerned about the location of the other, and heaven help us all if one is stuck on the other side of a closed door. Peas in a pod take togetherness VERY seriously. And it's adorable.

Love this story! I really needed a pet pick me up today. I'm so glad your new fur babies have turned out to be so awesome! Thank you for sharing them with us!

Aww. Loving the animal stories. I'm also impressed that he follows pointing (you pointed to Rey and he LOOKED?). I would have needed to physically pick up my cat to make him notice something in the room. ;)

That is beyond adorable.

But why are your cats so much smarter than my two? Like, he listened and looked when you pointed? WTF? Good thing mine are cute.

I do have the same svelte boy cat and tubby girl cat problem, though, so we have that in common.

My husband and I had small party on New Years. This was the first time we'd had a large number of people over at our house at one time. I was sitting down talking to people, tucked into a corner and I noticed my dog was quickly walking around the house looking for something. I eventually called his name, his body relaxed and he came running to me. He was looking for me! It was the cutest thing I'd ever seen.

I love this! I have two German Shepherd Dogs, and one just tries to trick her sister into giving up treats.

Case in point, yesterday Diva (my "I'll eat anything, anytime" girl) and Suki (my "Meh, food. Who cares about food." girl) were both given a bone.

D. devoured hers, as usual, while S. just ignored hers (however, D. knows not to approach it if there is a chance that S. is remotely interested in eating later).

D. went outside and started barking, which S. could not ignore (she is, after all, head of security). So S. ran outside to investigate, and D. ran in, quickly grabbed the now abandoned bone, and ran off again. Yep, sisterly love in action :)

My boy cat does the EXACT same thing when he's looking for his sister. She, on the other hand, is completely ambivalent about the whole thing.