The Downsides of Upsizing

In the weeks after adopting Beau, I became super-hyper-conscious of how many damn exit points there are in our new(ish?) house. Our old house had two doors and one gate, and you could stand in a single spot in the foyer and get the open/close status on all three at once.

Now there are five different doors that lead to the outside, spread across three different levels. Three doors lead to the backyard, where there are then two different gates that could possibly be open, on complete opposite sides of the yard. One doors to the garage, where there are two more doors to worry about, especially since one of our neighbor's garage remotes accidentally opens ours by some weird cross-signal coding glitch. The front door has a storm door back-up, but that's useless unless it's locked because Beau quickly figured out he could push it open with his front legs and bolt to freedom, terrible freedom.

For awhile there, our house felt more like some algebraic danger map of escape routes and combinations -- check that door, then the door after that, run from window to window to confirm gates are latched, solve for X, divide by π, multiply by factor of wine, etc.

Thankfully, as I've mentioned before (and thus tempted fate repeatedly), Beau adjusted and knocked that shit off. We're still super careful, but the thought of a potentially unattended open door lurking somewhere in the house no longer keeps me up and OCDing all night.

But now we have the cats. In particular, Rey, who, when she's not falling out of windows or pulling shit like this... 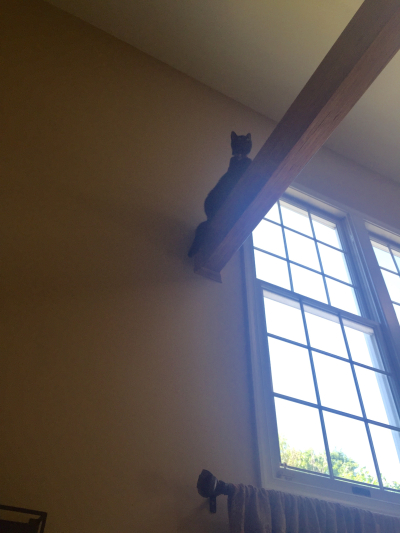 ...is constantly getting her ass shut up somewhere.

I just counted, and this house has 26 fucking doors INSIDE the house. (Hell, I didn't even notice all of the doors until we were at inspection and discovered two entirely new storage areas, Narnia-style.) Of those 26, I estimate that Rey's ended up on the wrong side of at least half.

(Finn's only been shut up twice that I know of, though one of those times involved me removing a mysteriously locked-from-the-inside doorknob [IKEEEEEEEEE] with power tools, so perhaps he gets extra points.)

And that count doesn't even include all the OTHER random kitchen and bathroom cabinets, drawers, and storage furniture she's managed to climb into without anyone noticing. Her black fur allows her to simply disappear into corners and shadows and hide from any quick room/cabinet scan, and while her brother seems to understand the consequences of a closing door and will run out at the last second...Rey is... 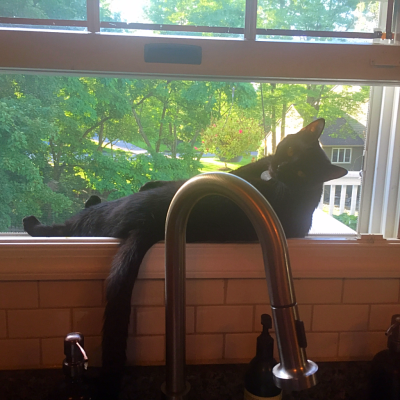 Well, she sure is pretty.

(Also, new laundry rule: ALWAYS CHECK THE WASHER AND DRYER FOR A CAT BEFORE HITTING THE START BUTTON.)

Both cats like to be up and wandering for most of the night, with maybe one short pit stop in our bed before heading out again, then they both reappear like magic in the morning at the siren call of the can opener. Except the times when Rey doesn't show up.

This has led to a couple frantic morning searches for her. (Which still give me a wicked case of PTSD flashbacks to that horrible night when it slowly dawned on us that no, Ceiba really was not in the house anywhere.) We run around opening doors and listening for her kitten-like meows, and EVERY TIME, just as we start trying to figure out if there was any chance that she slipped outside the night before, one of us opens a door we hadn't thought to try (i.e. the water heater closet, the built-in storage cabinets in the living room) and her panicked ass comes bolting out, having learned everything and nothing. 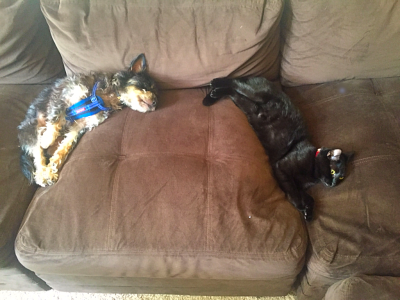 Meanwhile, if there was a cat who probably WOULD benefit from a night of peace and quiet locked up somewhere, it's poor, long-suffering Finn. 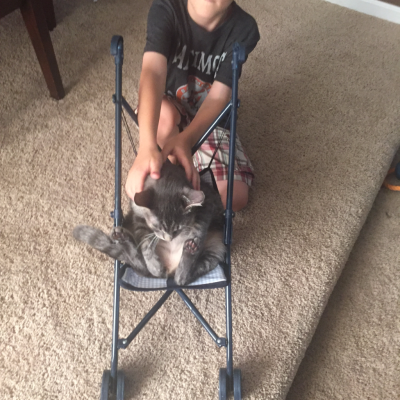 Sometimes he really does sit there and let them push him around like a baby. 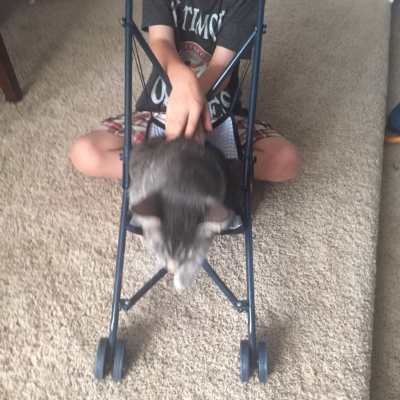 (This was not one of those times.) 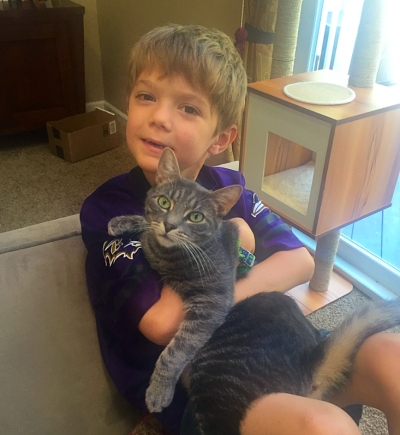 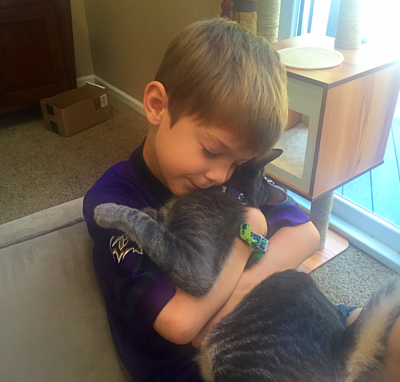 (This time kind of was.)

does Rey have a bell on her collar? maybe two or three bells? maybe you could attach one of those 'find my keys' devices to her collar, too?

Rey absolutely needs a bell. And maybe some kind of LoJack/OnStar system in a microchip. My cousin had a cat -- also black -- who got locked in the FRIDGE somehow. Luckily it wasn't one of those old-timey murder boxes like on Punky Brewster, she didn't freeze to death, and she had some nice leftover lasagna to snack on until everybody got home and realized she was sorta missing.

I had a cat get into the under shell of the bathtub through an adjacent cabinet. I still get chills when I think about what could have happened if we hadn't thought to look there.

Maybe you should invest in one of those tile chips for her collar? https://www.thetileapp.com/
If it works for keys, it should work for cats, right? :)

You need something like this! :-) Bought one for my husband who is always misplacing his keys.

we have 5 cats and 2 dogs. one of the cats runs to the back door every night trying to go out with the dogs. most nights he is blocked at the door some nights he runs out to have a grass snack. 4 of the cats try to escape into the garage every chance they get. I filled all the cat and dog bowls one weekend and wondered why only the dogs came to eat(the cats usually trip me ) only to remember my husband told me they all escaped into the garage when he went out for a tool he needed. I was nearly mowed down when I finally opened the door because they can all tell time somehow and knew they were late for dinner.

Have you tried looking up your garage opener to find the instructions for clearing the codes and then re-pairing your remotes? That may work to keep your neighbor's from opening yours.

I have a cat like this! Any open door = an immediate bolt into the SWEET SWEET TEMPTING FORBIDDEN AREA that clearly must have been behind that door.

Which is how he once accidentally spent our entire vacation in Mexico shut inside the front hall coat closet. For 5 days. He was... skinny when we got home.

...And learned absolutely nothing from the experience, as he bolted right back into that same closet the next time it opened, about 4 hours after being freed.

I love cats. I really do. My girl cat hides a lot too, but she's very predictable. She's always under the bed. I can lure her out with catnip if she otherwise won't come out. My boy cat rarely ever hides. He's one who likes to lay on his back all spread out in plain sight.

Something that worked for a cat we had when I was a kid (also named Max, also Siamese) was to have a box of treats - preferably in a cardboard box but maybe one of the newfangled plastic containers would work - that you can shake really loudly to use as a dinner bell type call. In Max's case, his special treat were these little green pellets in a Hartz green box intended for my pet mouse - but OMG did he go bananas for them. I think they were compressed alfalfa.

You could stand in the doorway and shake that box and Max would coming sprinting out of nowhere to come back inside and have some treats. Maybe you could find something like that for Rey that she'd come running for based on the sound alone?

We have two cats - one elderly one who generally just does her thing and is no problem, but does occasionally get shut into my car when I'm not looking. THEN there is our other cat (Alex P. Kitten for all you Family Ties fans out there), who is recently allowed outside during the day and is a wanderer. This week, when he didn't come home when called, which he always does, I spent a lot of time wandering our streets (in PJ pants, my husband's flip flops and the blouse/statement necklace I wore to work that day - crazy cat lady outfit IN EFFECT!) calling his name. FINALLY - when I was about to give up, I heard him crying from under a house a few doors up. The owners were baffled as to how he'd gotten under there because they had spent a ton of time making sure their crawl space accesses were blocked. They had to pry open the access point so he could saunter out. Fortunately, he is a very loud and vocal cat, so I was able to hear him crying from the street. But still - they are crazy-making!

I once lost my cat on the roof, right before a job interview.

He's a strictly indoor cat, so this was a huge surprise and very alarming to both of us.

I'm so grateful he is a trusting cat who didn't want to be on the roof-- when I dragged out the ladder, he let me pull him off the edge of the roof and into my arms.

Rey needs a bell! We had to get one for our male cat, Orleans, so Savannah, his sister, would know when he was coming and she could go hide because he was such a bully to her. They make a breakaway collar with a bell on them so in case they get caught somewhere, they don't choke.

At least twice, I have heard a far off meow that I had to track down and have found one of the cats closed up in the drawer under my kids bed (where he keeps t-shirts)! So many places to get stuck!

[IKEEEEEEEEE] make me burst out laughing, in part because I thought you were cursing IKEA at first, which made perfect sense. :D

Loc8tor for pets! :) not as chunky as tile

my husband still tells the story of the kitten who fell between/behind two bookshelves. he was bondedtothe older cat and refused to respond to the puny humans, so it took forever to find him.

We also have a black cat named Bullet. We bought our house 3 years ago and all of the pets were a bit frantic and confused at first... my husband got home from work and went to change his clothes when he heard Bullet crying. He thought he got stuck in the bedroom so he searched and searched with no luck. Then he started listening very closely and realized Bullet was in the heat vents.... in the living room, he had managed to pop out the vent in the floor and proceeded to crawl inside to find out he was stuck. Luckily it was early fall and the heat wasn't on. My husband went to the basement and was able to coax him out of the vent and then we siliconed the vents to the floor so he could no longer pop them out.

Are Finn and Rey, the Devon Rex breed?