The Garage Door of Existential Dread

I had a weird dream last night -- not VERY weird, as my weirdest weird-ass dreams go, but still -- where I looked out my front door to discover that one of our garage doors was sitting at the far end of the driveway, banged up to hell. I ran outside and a crowd of neighbors had already gathered, explaining that this sort of thing "happens all the time," thanks to a crazy woman in the neighborhood who likes to pull into empty, open garage door bays in hopes of sneaking into houses and wandering around.* Sometimes, they said, she'll close the garage behind her to hide her car, then back out in a panic before you catch her, destroying the door in the process.

"You should keep your garage doors closed," they said.

"So I should call the police," I said.

Then I noticed a crew was already working on repairs -- an oddly oversized crew I had not called or hired, veering things into Money Pit-fueled anxiety dream territory -- but who assured me I didn't need a rate quote or anything because they "had the best rates, all the best rates. You won't believe our rates."

My Dream Self was lucid enough to know that none of this was making any sense, but not quite lucid enough, as the thought of "WELL AT LEAST I HAVE A GOOD STORY FOR MY BLOG" came through loud and clear at one point.

When I woke up, I realized 1) I forgot to lock the interior door that leads to the garage last night, and 2) dammit, now I don't have a good story for my blog.

But at least the Republican Convention is over. So that's something.

Rey would also like to be in the box. Unfortunately it turns out that Rey does not know how boxes work. 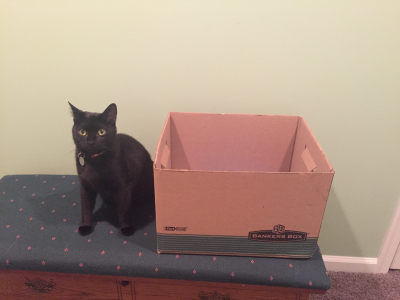 She sat there meowing at me for five full minutes before I picked her up and put her in the box. She seemed happy. Bu once inside, she got scared of a file folder and now the box is upside down on the floor. 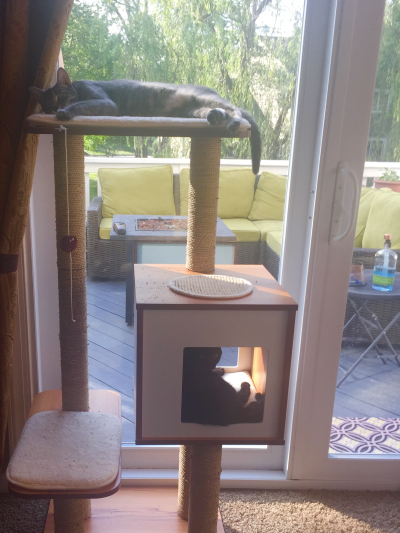 That is literally the most excitement I've seen all week. The other days have been a non-stop liveblog of me ordering children to go play outside and/or stop fighting/yelling/doing whatever thing you are doing this second stop it I mean it why aren't you stopping OMFG GO PLAY OUTSIDE ALREADY.

(*As I typed this out, I realized this dream is a continuation of a dream I had a couple months ago, where I in fact confronted this [entirely fictional] neighbor inside my house. "You can't be here," I kept saying. "This is MY HOUSE." She just shrugged and said "Nah." And I was left speechless in the face of that rock-solid logic and from that point on merely accepted the fact that she lived with us now, although I did send an angry email to our realtor that he really should've warned us about this sort of thing from a legal perspective.)

LOL - I have wacked out dreams all the time! I need to start writing them down.

I love your cat tree, where did you find it?

Last night was one of those pregnancy induced, I can only imagine this is what being on acid is like, dreams. It involved a blind priest trying to give me an abortion and my daughter praying on her knees upstairs with her hair over her face... Omg I would def take a crazy lady taking out my garage door over whatever that was!

Amy, I kept picture an interaction with Conseula from Family Guy. "You need to leave now!" "No, I stay."

I'm really quite envious of your patio furniture and your fire table! And your cats.

Those two anxiety dreams stem from All The Doors! So Many Doors!

(Speaking of: any update on that whole box of missing 4T shorts or whatever and all the missing pool stuff?! Inquiring minds, lady!)

I completely agree with RZDrms, for christs sake Amy google how to reset yours and your neighbours garage key fobs.
Trump scares me
and I'm living in the UK,
and living through Brexit,
and live closer to France than to London,
and my husband works on the London Underground (a terrorists wet dream)
and I keep dreaming about my teeth breaking.
Enough said.

@MrsCockles I totally read it that way!