A Minecraft Room For the Easy-to-Please

We picked the boys up on Saturday, with Beau as a reluctant and extremely barfy passenger. Which was great because obviously Jason had SO much fun cleaning the minivan the day before, he couldn't wait to do it again. 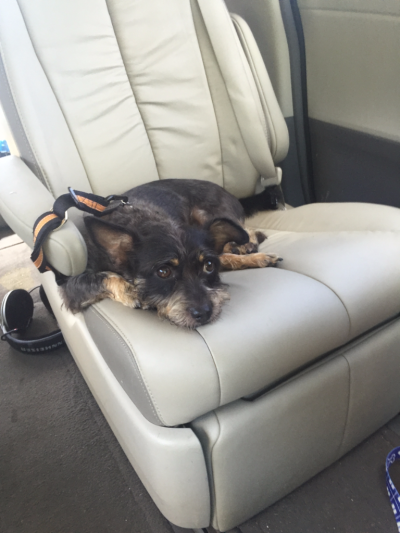 He did much, much better on the ride home, thanks to being reunited with his boys. And/or because he realized that we weren't systematically shipping family members off, one by one, until only the cats remained.

The boys immediately made a beeline to Noah's new room, and it went over even better than I hoped -- I worried Noah's expectations would be higher than what I managed to deliver on, but in his exact words: "This room is AMAZING. Thank you guys!"

For point of reference, here is a very bad, very glare-y before photo taken while we were prepping to paint: 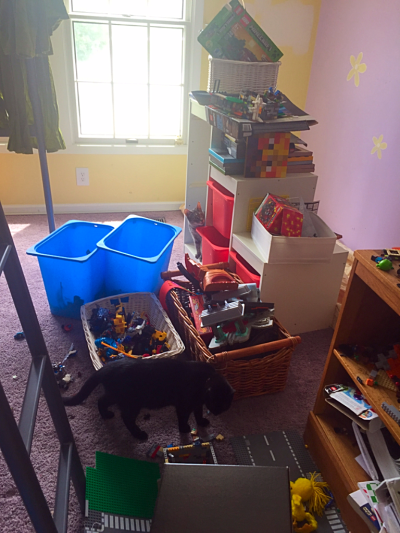 Biggest challenges included finding a shade of paint that somewhat downplayed the purple carpet, sanding down approximately four dozen handpainted daisies, and working around a towering inferno of toys, including an incredibly large replica of the Ghostbusters headquarters that Noah built on his own (aka NOT the skullfuckingly expensive set) and BEGGED us not to mess up while he was away.

(We messed it up completely. Just freaking destroyed it. Sorry your parents are such walking disasters, buddy.)

I decided to use Noah's existing Minecraft "stuff" as much as possible to save money and effort, and if this was a different sort of blog I'd say I upgraded them from "stuff" to "design elements" because I'm "frugal."

That "stuff" included his Halloween costume (cardboard Steve head and sword), a big stash of books, a couple playsets, two nightlights, and of course, a ton of Lego sets and the boxes that Noah refuses to get rid of because he likes the pictures. 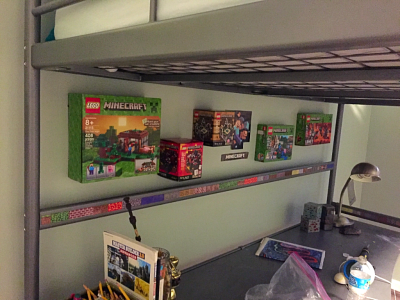 Lego boxes as home decor. Sounds legit. Guess who loves it, though?

(Really not sure why the paint is photographing so much greener than real life. Guess that's what happens when you insist on taking photos with a camera you dropped in a toilet once upon a time.)

To make his bed a bit more Minecraft-y (without springing for the officially licensed bedding), I bought a colorblocked Ikea duvet and pillow set. Then I got these ThinkGeek magnets and covered every visible metal surface with them. They will of course NEVER look that neat again, as the kids keep moving them around and building little "worlds", but...guess who loves it, though? 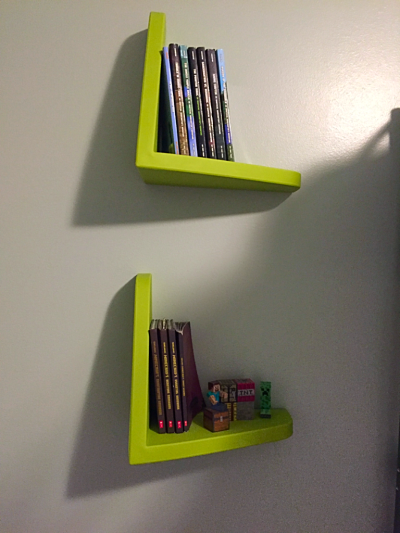 Books and playsets prominently displayed on the world's most irritating-to-hang Ikea shelves. Do not buy these shelves. Although the shelves were NOTHING compared to this piece of ragestroke, a wall decal that has pretty lousy reviews on Amazon but I bought anyway because I thought I was better at decals than the reviewers. But I'm not, because this is a shitty decal that's more like a giant sticker, so it's pretty much impossible to apply straight and smooth on your first attempt but you really only get one attempt without ruining it. Plus it's weirdly divided into several pieces (the word "MINECRAFT" alone is THREE separate stickers), just to maximize your changes of crookedness. Do not buy this either, or spend too much time looking at this photo because your eyelid will twitch.

Noah thinks it's pretty cool, though. 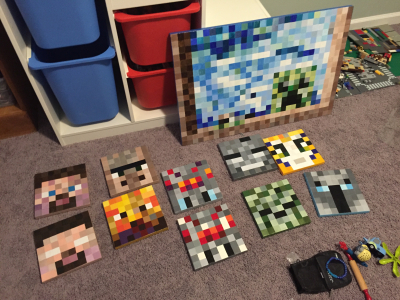 My battle with the decal of doom made me change my approach to these, an impressive array of canvas painting my mother-in-law was awesome enough to make for Noah. I'm not entirely sure every character is 100% true to the game or if she might have wandered into a fan art forum at some point, but they are fun and colorful and there's enough of them to cover the remaining big blank wall.

I originally was going to hang them up all even and precise and squared off, but after the decal I was like, NOPE FUCK THAT and went for a more random, scattershot approach of just hammering nails in wherever. 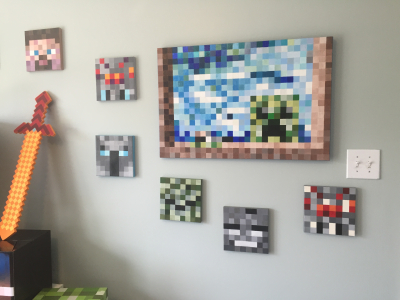 (And since all it will take is one good door slam to knock them all crooked anyway, I think this was the way to go.) 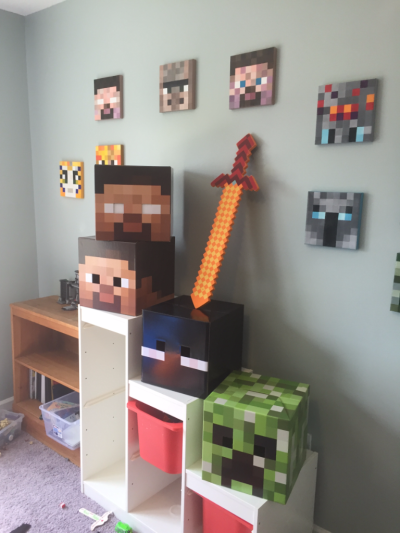 I purchased a set of three more cardboard heads to add more characters, turned the duplicate Steve into Herobrine, then stacked them up as a ready-to-go dress-up area. Many epic battles have already ensued, and many walls walked into.

Those shelves and bins were all nicely organized maybe 20 minutes before I realized I didn't have a photo of this wall angle, by the way. I walked back in to find this: 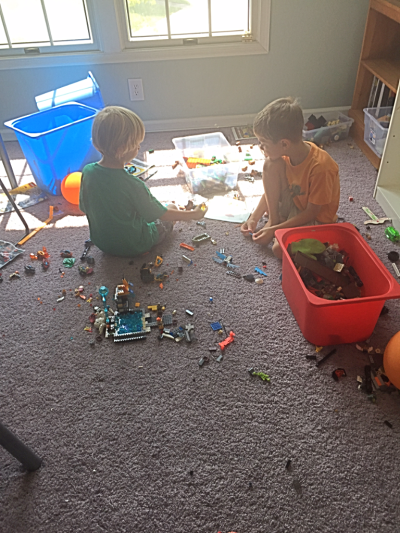 The Minecraft room is the place to be, I guess.

(Also Jason said he'd hang the curtain rod back up for me.)

Those boxes are brilliant! I'm totally stealing that idea!

Be very impressed with yourself, my 12yo daughter thought it was 'so awesome'as well. Then she informed me that there was a creeper and skeleton in the background of the sticker of doom. What? Is this English your are speaking?

Love it! Great job you guys!

Those pictures mess with my eyes. Good thing I don't have kids....

THAT is so FUHREAKING fun!!!!!

You guys ARE awesome! So glad Noah loves his new room.

Promised to paint a lightning bolt on my son's wall when I painted his room during our adult staycation. After looking at the either crappy, small, or ridiculously expensive options from Amazon/Etsy I went the "project some free clip art on the wall and tape around it" method. It definitely fit the good enough category!

Love the room! Great job. We painted my daughter's room three years ago, THREE, and I just last weekend got over myself enough to conquer my fear and make her closet drapes for doors already. Three years. I'm lucky she was still happy with the fabric.

FWIW, our vet prescribed an uber-cheap magic pill that makes our doggy not throw up in the car anymore. Life changing.

Displaying things he already has and loves sounds smart to me. Why get new stuff when he loves these?