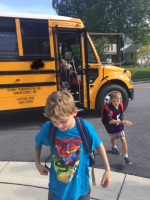 This is the school year I have been waiting for my whole life, or at least the parenting portion of it: All three children riding the same bus, attending the same school, and being there ALL THE LIVELONG DAMN DAY. And thanks to our child-spacing math, this is the only school year where that will ever happen. So far it's been gloriously easy, but also supremely weird. I'm so used to juggling multiple schedules and exits and drop-offs that having them all walk out the door at the same time and being DONE, JUST LIKE THAT, almost feels like a trick. After they board the bus I reflexively glance around the bus stop to collect a younger child only to realize I'm about to corral someone else's toddler. By noon I'm still jolting myself with a GO PICK UP A PRESCHOOLER muscle memory. Eating lunch by myself and not making one for someone else kicks me in the emotions a little bit. (Although that might just be the dog and cats underfoot and nipping at my ankles every time I walk into the kitchen because YOU CAN FEED US ANYTIME, ALL THE TIME.) I've met them at the bus stop... Read more → 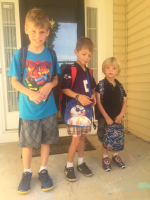 So I just dropped three entire children off at school, one FIFTH GRADER who is already so over it, a second grader who was like BYEEEEEEE PLZ LEAVE NO YAY, and sadly, the world's most terrified-looking kindergartner. Ike was expecting, I think, for us to walk him into his classroom, but since the school is approximately 97% made of kindergartners (rough estimate) at this point, they instead were corralling them in the gymnasium where each child was labeled and instructed to line up by homeroom and wait. Ike's face was like, "I'm so confused. I've made a huge mistake. Also they labeled me as Isaac." I spent ages filling out multiple forms listing both Ike's legal name and preferred name, and was assured that would be noted in "the system." It was not. His teacher promised him a new label once they got to the classroom but of course as we left we could still hear people calling him Isaac. So anybody on the to-nickname-or-not-to-nickname fence out there, I must report that a different legal name CAN be a bit of a pain in the ass, leading to blank dumb stares in doctors' offices because who the hell is Isaac,... Read more → 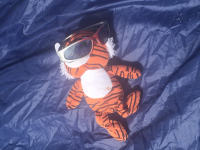 At da beach, hangin' with kids, hangin' with friends, hangin' with Hobbes. Who has apparently been hangin' with the spiked beach punch pretty hard. Wow, get yourself together, man. If Beach House Week 2016 has a theme, so far it's been a tie between Things You Should Not Eat: (SPOILER ALERT: Duh. This is a terrible idea. So bad. Even more vile than your wildest fever dreams are able to comprehend. My children, of course, loved them. I still threw the package out while they were sleeping because I WANT A BETTER LIFE FOR THEM, A LIFE WITHOUT THIS ARTIFICIAL ABOMINATION.) (On the other hand, while Maryland blue crabs are ALWAYS something you should eat, especially while at the beach, maybe don't attempt to eat like, 40 of them, even between four motivated adults. That's an awful lot of crab and a pretty tremendous mess.) (Especially after pigging out on Velveeta nacho dip and chips just a couple hours earlier.) //PHOTO NOT FOUND ...and theme #2, aka Burying Small Children In The Sand Is Fun: Burying Ike from amalah on Vimeo. Unburying Ike from amalah on Vimeo. (Noah was having none of the burying business, naturally, but he's here and... Read more →

A Photo Essay That Really Bombs the Essay Portion 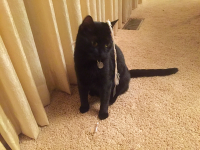 It's been a week, you know? Good time for some cats. Oh look another cat. Hi, other cat. Nothing but cats. Okay, cat and one dog. Okay, dog and other cat. Okay, two kids, too. And that's all I've got. We're off to the beach for a bit and I've barely started packing, unless you count the kids' suitcase that I never unpacked after their week with the grandparents. That's good to go, because FORESIGHT. And EPIC LAZINESS. Which I always knew would pay off at some point, in one small way or another. Read more → 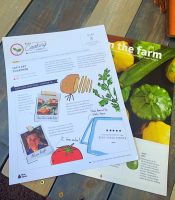 This post is sponsored by Blue Apron. With lots of travel planned and our garden overflowing, we decided our standard Blue Apron delivery of three meals a week might get a little overwhelming, so we switched to the four-person, two-meals-a-week Family Plan a few times this summer. One of the more charming surprises of this particular plan (besides all the delicious foooooooood), was the inclusion of a weekly "Kids' Cooking Camp." Every week, our box included cooking activities, games and challenges for the boys to try. It was a really great idea. One week covered easy food prep techniques (peeling garlic, washing produce, rolling pizza dough), another week challenged us to keep the dinner table a family-focused, screen-free zone (that was harder on the grown-ups than the kids), yet another taught kids what grows in what season and why it matters; all summer kids were encouraged to submit recipes and photos and stay hands-on in the kitchen. The best week, according to my kids, was this one: Not only were the recipes a hit (Moroccan lamb & beef pitas and a crispy cod with corn on the cob), but tucked inside our box of ingredients was a packet of pea... Read more → 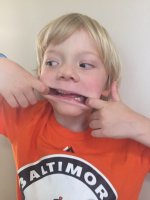 As of 1 p.m. today, Ike is finally, for-real, officially registered for kindergarten. When I called to make the appointment and admitted that yes, he's another Storch boy, little brother to the other Storch boys, I was asked why on earth I waited so long to register. A fair question. "We had some...readiness concerns," I explained. Ike's June birthday has always worried me. He'll enter kindergarten a full nine months younger than his brothers were, and he's never been particularly mature for his age. To be honest, he's probably the opposite of that. Especially at home where he's most comfortable with his role as "the baby." His behavior reports from preschool weren't 100% glowing either, as he would get shy and then stubborn and refuse to participate. He'd claim he didn't know the lyrics or hand motions to the songs they sang every dang morning and sit in stony, arms-folded silence. If he didn't get his preferred seat or spot in line, he'd run off and pout in the corner. He refused to follow classroom rules he thought were silly, like not being able to get up and go to the bathroom by himself. His class had a couple older... Read more →

A Minecraft Room For the Easy-to-Please 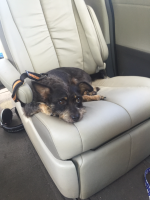 We picked the boys up on Saturday, with Beau as a reluctant and extremely barfy passenger. Which was great because obviously Jason had SO much fun cleaning the minivan the day before, he couldn't wait to do it again. He did much, much better on the ride home, thanks to being reunited with his boys. And/or because he realized that we weren't systematically shipping family members off, one by one, until only the cats remained. The boys immediately made a beeline to Noah's new room, and it went over even better than I hoped -- I worried Noah's expectations would be higher than what I managed to deliver on, but in his exact words: "This room is AMAZING. Thank you guys!" /high fives self //smacks ear by accident For point of reference, here is a very bad, very glare-y before photo taken while we were prepping to paint: Biggest challenges included finding a shade of paint that somewhat downplayed the purple carpet, sanding down approximately four dozen handpainted daisies, and working around a towering inferno of toys, including an incredibly large replica of the Ghostbusters headquarters that Noah built on his own (aka NOT the skullfuckingly expensive set) and BEGGED... Read more → 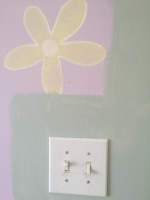 It's 11:32 a.m. on Friday night now, and I just woke up 15 minutes ago. And it was glorious. And it's been that way all week, I have to admit. We dropped the boys off at their grandparents last weekend, spent one night in Philly (and still managed to squeeze in three different cheesesteak outings), and have spent the rest of the week here at home, sans kids. The first morning I woke up super early to phantom kid voices and that sense of OH SHIT WE'RE PROBABLY RUNNING LATE FOR SOMETHING. We stayed up super late for no other reason than we COULD, heading out to restaurants and bars and clubs just because LOOK AT US, WE'RE NOT PAYING FOR A BABYSITTER. And then we started sleeping in later and later until here we are today, bordering on full-time nocturnal. In the hours in between, we painted Noah's bedroom and I got to work giving it a low-budget Minecraft theme -- I'm sensing Noah will be a bit disappointed that we didn't paint the floor-to-ceiling pixelated terrain and sky he asked for, but sorry, it took us a full YEAR finally paint over the purple and yellow flowers in... Read more →

Late Summer Wrap-Up of Nothing in Particular

Oh, hello blog. You're boring! Life is boring. I don't actually mind boring, though. Noah finished up four weeks of a summer school program for social skills, and despite originally being supppppperr not-so-on-board with the whole riding the BUS to SCHOOL in the SUMMER, that is UNFAIR MADNESS, he ended up having a really great time. When we showed up to the open house, we immediately bumped into a boy who Noah had an on-again/off-again/on-again friendship with all year. A boy who I admittedly did not always think the most charitable thoughts about during the off-again part, but who lit up with a huge, excited smile at the sight of Noah, and rushed over to give him a big hug. His mom and I looked at each other like, ohhhhhhhhhhhhhhh, okay, I get it now. That friendship is solidly on-again, as are two new friendships with two other boys in his grade. I think 5th grade is going to be pretty great. Ezra and Ike are finishing up a school-prep camp together this week, and are also having a surprisingly amount of fun despite the heavy academic focus. Learning can be fun! Especially with your brother there, even if the... Read more →

We were out having dinner when the warnings started: Flash floods in Ellicott City. The warnings, however, weren't coming through on our phones via weather service alerts, but directly from our waiter, who was running from table to table making sure everyone knew: don't drive through downtown Ellicott City. I don't know how he found out, but we thanked him for the heads up and assured him we'd take an alternate route home. We were in downtown Catonsville, which is a little over three miles away from downtown Ellicott City. We'd driven right through it an hour or so earlier. Despite the not-great weather, the sidewalks and bars and shops all seemed typically packed with tourists and locals. In my head I imagined some rising river water clogging up one of the main intersections and causing a traffic snarl, which we avoided by taking the long way home. We only live a mile away from the historic district, but we're both farther away from the river and higher in elevation (not to mention our neighborhood has significantly more modern sewers and drainage compared to an area first built in 1772), so our house and street were predictably Just Fine when... Read more →