And it's been that way all week, I have to admit. We dropped the boys off at their grandparents last weekend, spent one night in Philly (and still managed to squeeze in three different cheesesteak outings), and have spent the rest of the week here at home, sans kids.

The first morning I woke up super early to phantom kid voices and that sense of OH SHIT WE'RE PROBABLY RUNNING LATE FOR SOMETHING. We stayed up super late for no other reason than we COULD, heading out to restaurants and bars and clubs just because LOOK AT US, WE'RE NOT PAYING FOR A BABYSITTER. And then we started sleeping in later and later until here we are today, bordering on full-time nocturnal.

In the hours in between, we painted Noah's bedroom and I got to work giving it a low-budget Minecraft theme -- I'm sensing Noah will be a bit disappointed that we didn't paint the floor-to-ceiling pixelated terrain and sky he asked for, but sorry, it took us a full YEAR finally paint over the purple and yellow flowers in there and I am not painting again when Minecraft suddenly isn't cool anymore. Which will probably happen in 3...2...1... 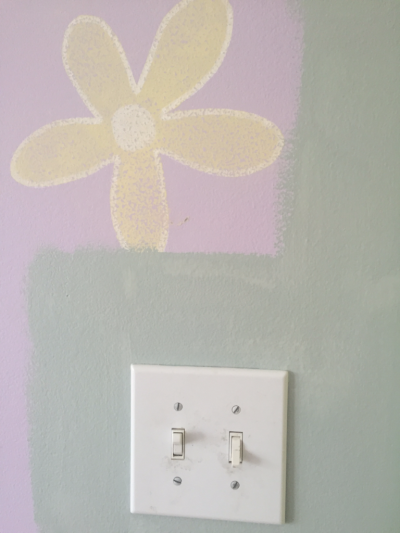 (New paint looked very very green next to the old purple paint but is actually a shade of grey that ACCORDING TO PINTEREST is the same shade of grey used in the game. I'm sure my 10.5 year old will be deeply impressed by my low-level commitment to this theme.)

And we did other exciting stuff like...laundry. We went to Ikea all by ourselves in search of a coffee table, decided not to buy a coffee table and got some napkins and meatballs instead. Jason reprogrammed our garage doors and washed the cars. I played with the pets a lot, watched the Olympics, and organized my closet.

(I originally typed "reorganized," which would suggest that it had been organized at some point, rather than just being a huge mess of topply piles and storage bins full of a frustrating mix of tank tops, sweaters and mismatched shoes. It's much better now!)

We also pushed the button. And I am somewhat disappointed to report that absolutely NOTHING happened. No alarms, no cops, and the linen closet didn't magically transform itself into a state-of-the-art panic room. Just...nothing.

After waiting a year to get up my nerve to push that damn thing, I feel vaguely ripped off. 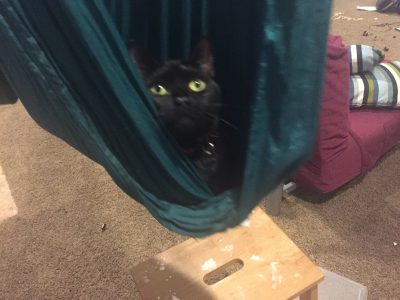 Rey has discovered Noah's swing. She gets mad when I stop pushing. 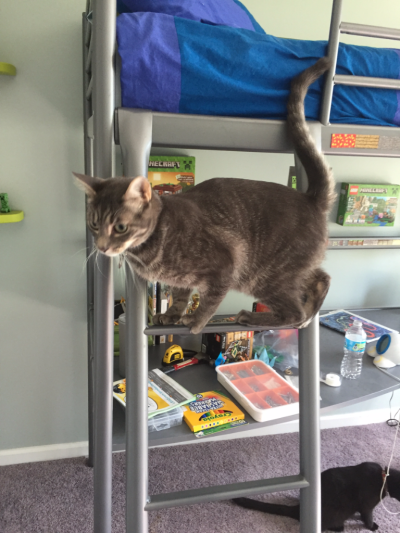 Finn knows how to get up on the top bunk. 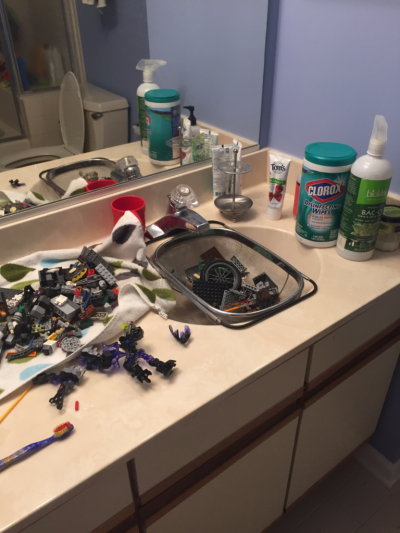 And this is what happens when you discover that a cat and/or cats used a Lego bin as a litter box, oh my heavenly gross god.

We were supposed to pick up the kids today and go back to Hersheypark (I still have a second days' worth of tickets from our sponsored trip), but then looked at the weather report of OH JUST ONE HUNDRED AND TEN DEGREES and decided that...no, that does not sound like a fun time for anyone.

Grandma offered to take them to the neighborhood pool today instead, then asked if it was okay for them to stay until tomorrow so they could meet some of their cousins.

All in all, it was a great week of grown-up alone time. And I now officially miss my kids so much my chest kind of hurts, so it's definitely time to get them back home. Tomorrow morning. Or you know, whenever we actually wake up.

So I might have seen Jason's Geno's post on Instagram and I might have gone fan girl and thought about stalking you through South Philly so I could meet you and my wife definitely looked at me and said "Stop being weird". So. I didn't go looking for you. You're welcome.

Your week sounds lovely-a great mix of getting things accomplished, bumming around, and adulating without children. I have lots of family around, but none of them have ever offered to take the 9 year old for an entire week! A little jelly, but yay for you! Re-entry may be rough.....

That would be 'adulting', not adulating, but that sounds kinda fun too?

Yep, did the Lego cleaning too. Kitty didn't find the right box. Didn't think if using a sieve though, would have gone faster!

As for the unknown button, per Steven White, you're going to get a phone call from someone in Madagascar saying, 'cut that out!!'

I am so pleased you reset your garage door fobs. (I was getting concerned)

Glad it was a good week. And sorry to be the bearer of annoying news, but Minecraft will always be with us.

I work at a library, and we have our own Minecraft server. Of course kids are obsessed with it, but the funny part was when a new, college age staff member walked through after we first set it up. He did a double take, and said, "I LOVE Minecraft! I started playing in middle school, and..."

Then he talked about Minecraft for six years and I tuned out. Anyway, I vote for adding a few pixels here and there. Can you get some kind of decal material that peels off?

Laundry. I need to do more...laundry.

Yikes our cat did that too! and at first I was thinking "I'm going to have to throw all these Legos away because this is the grossest thing EVER" but then I realized it was like a squillion dollars worth of Legos. We took them out on the back porch and sorted through every Lego and washed them all. It took a couple of days. The cat hung around like she wanted to help. Now we keep the Legos in smaller containers with lids. No more giant cat box sized container.

Noah is 10.5?! Sorry, my brain got stuck on that, but geez. How has it been 7 years since I started reading your blog when I haven't aged a day? (No, forehead stress lines, I DO NOT see you there. La la la!)

A week after my cat had kittens, in her postpartum stupor, she used my laundry hamper as a litter box. She shat on wool sweaters. Goddammit. Then she scratched the shit out of my arm when she thought I was sitting on her kitten (I wasn't). That was in June and the scars are still gnarly. Good thing she's cute and snuggly.

sounds like a great week. maybe you set off some crazy butterfly effect with the button that we won't know about for months or years. not until the russian knocks on your door. ;-)

I'm so disappointed about the Red Button. Lamesauce.

Can you please post pictures of the Minecraft themed bedroom? My kid's room is already green he would LOOOOOOVEEE it if I could make it minecrafty and I'm just not that, er, crafty, of a thinker.

Okay, this is going to sound weird, but was your water hotter afterward? We have a red button that gives a boost to our water heater.

I must appreciate the way you have expressed your feelings through your blog!