Home Archives About Subscribe Advice Smackdown Tip Jar
Small, Medium, Large
Down the Drain In More Ways Than One

This is the school year I have been waiting for my whole life, or at least the parenting portion of it: All three children riding the same bus, attending the same school, and being there ALL THE LIVELONG DAMN DAY.

And thanks to our child-spacing math, this is the only school year where that will ever happen.

So far it's been gloriously easy, but also supremely weird.

I'm so used to juggling multiple schedules and exits and drop-offs that having them all walk out the door at the same time and being DONE, JUST LIKE THAT, almost feels like a trick. After they board the bus I reflexively glance around the bus stop to collect a younger child only to realize I'm about to corral someone else's toddler. By noon I'm still jolting myself with a GO PICK UP A PRESCHOOLER muscle memory. Eating lunch by myself and not making one for someone else kicks me in the emotions a little bit.

(Although that might just be the dog and cats underfoot and nipping at my ankles every time I walk into the kitchen because YOU CAN FEED US ANYTIME, ALL THE TIME.)

I've met them at the bus stop every day so far, technically because Ike's just a kindergartner and can't be trusted get off the bus and walk the length of three measly houses back to ours, but it's really because when 4:30 rolls around I am completely out of things to do with myself so I might as well stand out on the corner and stare down the street for awhile, while proudly showing the neighborhood that yes, I DID take a shower today and put on real clothing, howz about that?

On the other hand, work has been the easiest and most productive it's been in ages. No constant interruptions,no MOM'S WORKING STOP IT GO AWAY meanness, no mid-day breaks for preschool/camp pick-up (that YOU KNOW I would use as a procrastination excuse, like I COULD start on another writing task now but I'll just have to stop midway through and that'll fuck up my flow so let's just dick around on the Internet instead). Just...peace and quiet, for seven and a half straight hours. It's actually a bit...much, to be honest.

(Glances at school calendar, sees approximately fourteen billion days off in the near future, tells self to shut up.)

Ike seems much more confident each day as he heads out, and then completely wiped out (and weirdly sweaty?) by the time he gets off the bus in the afternoon. He says kindergarten is "good," his teacher is "nice," and he has "fun, but not THAT much fun." His school-provided backpack label still says Isaac but he says that's "fine." Overall not a glowing review of the much-hyped kindergarten experience, but he's happy to go each morning at least. Today he stopped to pick a dandelion and put in his backpack for his teacher, who I'm sure will be thrilled.

Ezra loves school, as usual, and was thrilled to be placed in a class with two of his best friends from last year. Although his girlfriend is in another class and he sees her at recess, but the romance seems to have cooled. He's also coming home with some new slang and a bit of newfound sassy backtalk, which I have very mixed feelings about. No, child, YOU take a chill pill. I'm fine.

Fine, yes, by the way, Mom, can you EVEN BELIEVE that with the power of Command Blocks you can craft amazing things like <INSERT ADULTS FROM CHARLIE BROWN NOISES>.

So that's where things stand on Day Three Of School, Glorious School. At some point I shall put all my free time to good use around here, hopefully getting around to belatedly commemorating our One Year Yellow House Anniversary, and tell you a story from our beach trip where I learned I am allergic to shellfish, you'll never guess how, no, you'll never fucking guess how. 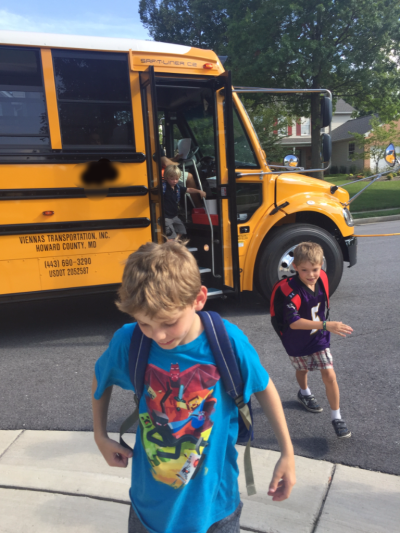 I am blown away that your boys don't get home from school until 4:30. You must start way later than we do. My youngest gets home at 3:30 and the oldest just before 3:00.

I did the calculations yesterday and realized that, like you, I get one single year which all three boys in the same school on the same schedule (5th, 3rd, kinder). One. Sigh.......

Sorry to hear about the shellfish allergy. But on the bright side it seems the price of epipens may be coming down again soon as a result of all the outrage!

My youngest will be in kindergarten next year and I am SO PUMPED about the ability to work all the live-long day without interruption. It's kind of stopping me from being sad about them growing up, at least for now.

4:30! Wow, that is a long day for all of you! Mine are in 1st and 4th, and life is fantastic. My new favorite part of the day is when I look up and it's 9:30, and I think, oh it's still early, rather than holy crap only 2 more hours before kinder pickup.

You can borrow my toddler if you're feeling lonely. You can drive her to preschool two mornings a week, 20 minutes across town, for 2.5 hours...and you can also volunteer there every few weeks or so, since it's a co-op. Really. You can do all of these things.

Oh, fun! I ALSO learned I had a shellfish allergy on my last vacation...after eating it for forty years.

I'm a teacher in the UK, and I think the flower for his teacher is an excellent sign! Only a few little boys do things like that, and it's the sweetest thing.

If you balled up your youngest and put him together with your oldest you would get my singleton. Always sweaty, always kinda ambivalent but exhausted by school and not at all interested in anything when he gets home except Minecraft. Are you bringing him/them to the Minecraft Minefaire thing in Philly in October??

So I just saw that the governor signed an EO requiring schools to be closed until Labor Day. I will never, ever move back to Maryland. Probably.

My kids are at the same school for the first time since daycare and I'm so damn excited I don't know what to do with myself. (<--That's a lie. I know exactly what I'll do with myself, which is get to work on time finally.)