Pay no attention to the new design quite yet (unless you're on a mobile device, which in that case, you are very welcome, about seven years late)...Jason jumped the gun a bit by sending it live. His priority was getting all the ad zones set up properly because of all those sweet, sweet Internet nickels; he didn't realize I wasn't down with the default fonts and wanted to test out at least fourteen dozen alternatives. I think we're currently displaying option number four and we're still not there yet. And I know some other pages are borked thanks to the bizarre way I had things set up before. Also, if anyone can help with the header/logo thing and expand some design-y doo-dads across the sea of Every Guest Bathroom I've Ever Had Green, shoot me an email with how much Cash Money you will require. But whatever, it's a site that at least looks like it's from this Internet century and maybe Google will remember that I exist again.

Our original trip to Hersheypark included two days' worth of park passes. We ended up spending one day at the park and the rest of the time at our hotel's indoor waterpark, and promised the boys that we'd make another day trip up with the remaining passes. Our day trips kept getting scuttled, though, due to someone being sick or the weather ratcheting up to 106 degrees before we'd even gotten in the car, but finally -- on the VERY LAST DAY the park would be open, the very last day our tickets were even valid, we made it back. We are such overachievers. 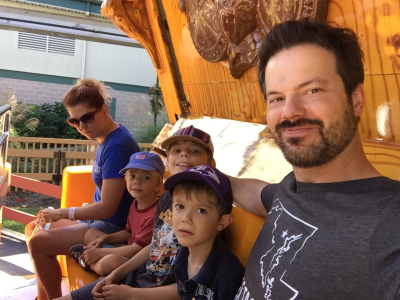 An explanation for MAH FACE in this photo can be seen in an alternate angle. 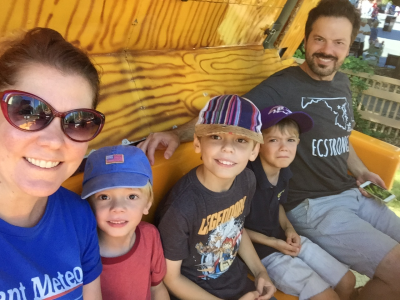 This was about 30 seconds before we traumatized Ezra 4 LYFE by making him ride one of those rocking pirate ship rides -- fairly tame as rides go but it triggered what was either a genuine fear of heights or just epic levels of middle child syndrome.

(Shout-out to my friend Lydia who left her sunglasses on my coffee table last week, because I lost mine and stole hers instead.)

(Lydia, by the way, was Rey and Finn's foster mom, and now she is my friend and provider of free sunglasses and slightly expired Epipens. More reasons to ADOPT DON'T SHOP, people.) 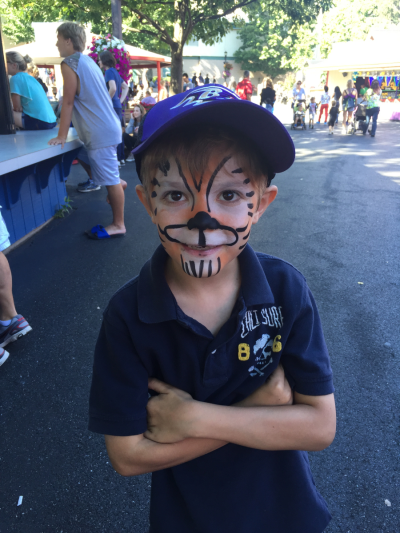 This is what $19 worth of facepaint and parental guilt look like. 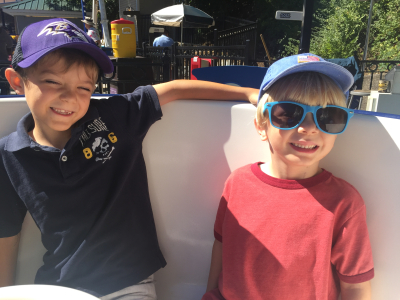 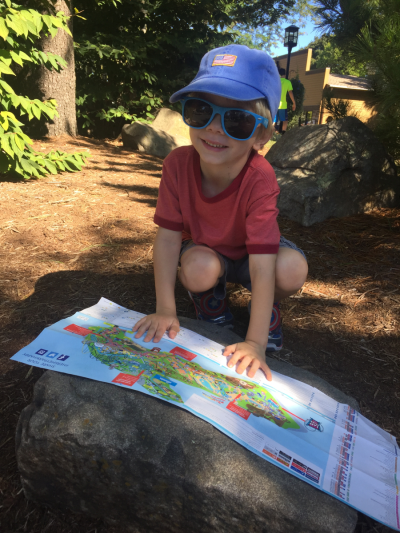 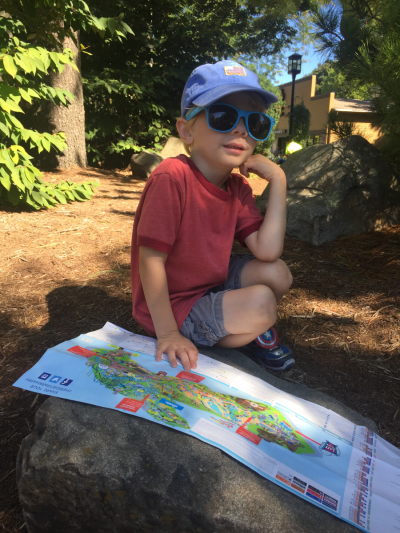 So while Jason was off with Noah getting to do stuff like this: I spent a lot of the day doing stuff like this: 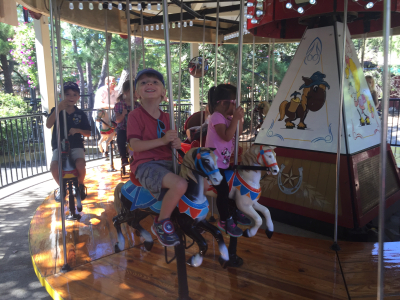 But then, inexplicably, Ike became fearless, demanding to go on anything and everything his height (barely) qualified him for, and of course hamming it the hell up at every opportunity. 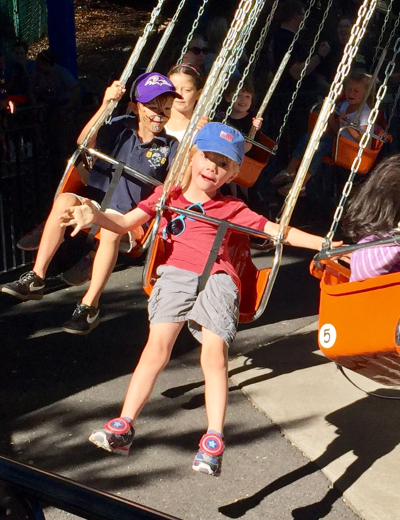 Before we left I decided I needed to make up for my personal lack of thrill rides, and threw down a challenge for Noah: Let me take you on your very first upside-down roller coaster. 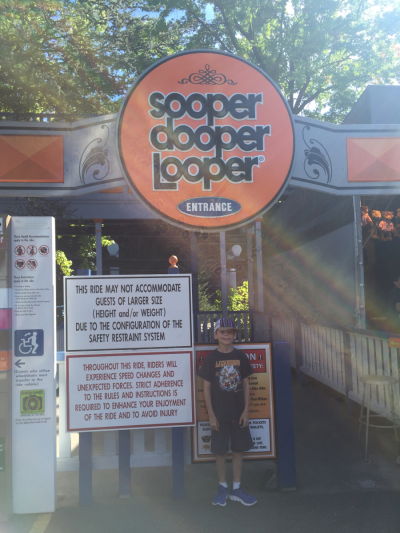 This was not an easy sell. Noah had a bit of a panic/rigidity meltdown in line after seeing the loop in the track, and there was another REALLY LOUD SUPER FAST coaster that kept flying by the line and upsetting him. (We'd so stupidly forgotten ear plugs or noise-cancelling headphones for him, which was like, "how long have we kept this child alive and still make rookie mistakes like that?") But I knew he'd enjoy himself in the end -- he ALWAYS does -- so we worked through it together with a lot of tight hugs/pressure, distractions on my phone, and me being an idiot and miming my own imagined, exaggerated reaction to the coaster until he was finally like, "Mom. Stop. Omg." 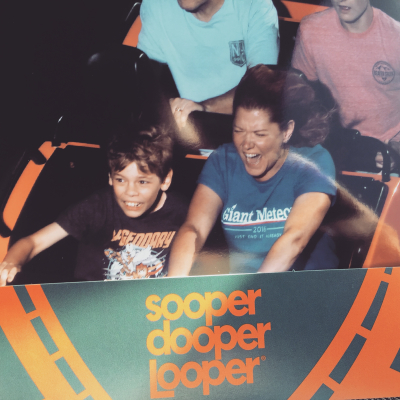 (Hmmm, maybe not so imagined nor hypothetical. Way to provide solid emotional support there, self.)

(Lydia I put your sunglasses in the bag drop with Noah's hat and did not lose them on a coaster loop. They are fine but a little sunscreen-y.)

After that, we called it a day and came home, with everybody at the perfect level of theme-parked out but not hysterically overtired. Ezra washed off his $19 facepaint and then asked when we were going back because he wants to try cotton candy. Nobody tell him cotton candy is available anywhere else in the world besides Hersheypark, unless you are also willing to babysit him for a minimum of 72 hours after he eats it.

Woohoo! Mobile friendly! (Also, I like the font for the comments, or at least the font that shows up while I'm typing it out)

The Pirate Ship at Hersheypark is the scariest ride I've ever been on in my entire life. My mother talked me on to it, insisting that we sit in the back row (which it appears you are also doing). At the time, they had only these skinny little metal t-bars that went over your knees.....so low, so scarily unsecure......I believe I was about 13 or 14 at the time and I do remember loudly telling my mom that I hated her and she was the worst mother ever about 20 times, or however may times our side of the ship was way the fuck up in the air and I really thought I was going to fall out, despite my underhanded death grip on the useless metal bar. My mother laughed the entire time. You can see the concern in Ezra's face. Awwww.

Ahhh I'm in love with the mobile option! I don't have to zoom in and then get pissed off because I over zoomed. Welcome to 2016!

First, the Pirate Ship is F*%$ing terrifying. Second, all of your children are WAY braver than I ever was or will be. Glad you had fun!!

I am a terrible person for pointing this out, but whoa holy heck is your "About" section like... 10 years old? No mention of kids 2 and 3 and Noah is referenced as a BABY 😂 update for the new followers maybe? I've only been here since just before lke was born but still that was 5 years ago!

Don't feel bad. Have solidarity with me because we ALSO just took our sensory-sensitive child to a goddamn carnival without anything useful for him. Sound protection? Nah. Child carrier (for my giant four year old)? Nah. Anything, anything at all? Nope. I've been doing this a very long time, you'd think I wouldn't get tricked into thinking "Oh hey, he's progressing so well," as meaning, "All problems are gone! Ignore normal precautions!" I feel you.

Nice, no more zooming in to read on my mobile!

Darn it, now I have to go update my blog. I kept telling myself I didn't have to because Amalah's blog looks just like mine and she's famous. Not so much now...

I LOVE the picture of Jason and Noah <3

It took me 15 years to go on an amusement park ride after I went on the Pirate Ship at age 20! I made some random child very happy when I gave him all the rest of my tickets.

Nice job on the mobile pages! Glad you sent summer out with a bang! It's Halloween season now baby!

i am so bad that I never even considered earphones or plugs for amusement parks. Mind blown. My poor kiddo.

And wow! So pretty!

I would just like to second the terrifying pirate ship ride. I'm a spinny-ride lover, and I can tolerate a coaster if there aren't too many drops. I have a fear of falling. Not the actual, I think I'm going to fall out of this coaster/ride situation - I love the swings and the coasters where your legs dangle and you're in a harness - but the actual _feeling_ of falling. and the pirate ship is that...over and over and over again. It honestly makes me cry.
But yay for coastering and Hershey as a rule! We live about 40 minutes away, in Lancaster, and are firmly in the Dutch Wonderland phase still (5yo, 3yo, and 5mo twins), but we'll get there!

I would gladly sit on a rock and look at what rides we are NOT riding with Not So Baby Ike. I have huge issues with things that go high, spin, go fast, go up and down, oh hell, with EVERY ride! I once rode the regular ferris wheel at the fair. Got off, promptly tossed up my cotton candy and candied apple, passed out and we had to go home. Since then, just looking at rides makes me queasy. On The Other Hand...huge props to Noah for even getting on that coaster!

That was my very first upside down roller coaster as well. I had the same fears all through the lines, but my parents made me do it. I absolutely loved it and love roller coasters to this day.

What the heck was I *thinking*?! SANSSSSSSS Serif, indeed. Yuck to Serifs!

Also?? The photo of Noah and Jason on the ride (their grips on each other! Jason's unbreakable protection and Noah's unconditional trust!) made me cry tears down my cheeks onto my desk. Fie!

The Super Dooper Looper was the very first roller coaster I EVER went on (a million years ago). My parents bribed me with a t-shirt. Good times.

I just heard on the radio this amazing thing: a great treatment for kidney stones is to ride on roller coasters. It helps you pass them before they get too big. Isn't that weird?

I just tried all of my stalker tricks, but was unable to find your email address. Hope you see this comment! Anyway, I'll design your banner for you, and any other bits and bobs that you need. You can pay me in tomatoes (I'm in the DC area). Seriously, PAY ME IN TOMATOES. Take a gander at my website to see if you think I'm up to the task (ingridshwaiko.com/new).