Down the Drain In More Ways Than One 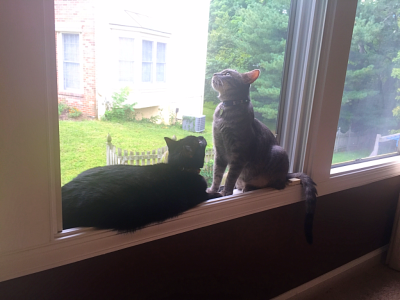 LISTEN THE FUCK UP.

For second and hopefully final time, LEGOS ARE NOT KITTY LITTER. 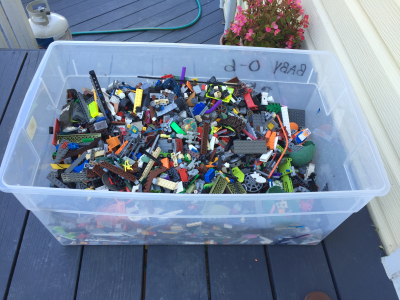 THIS IS NOT A LITTER BOX.

(It's also not full of Baby 0-6 month sized clothing, which you shouldn't pee on either because NOT A LITTER BOX.)

We have two actual litter boxes, which both see fairly frequent and successful use, given how often I'm cleaning them out, and yet here we are. The boys started complaining that one of the Lego bins "smelled bad" and sure enough, someone (or sometwo) had peed in it. 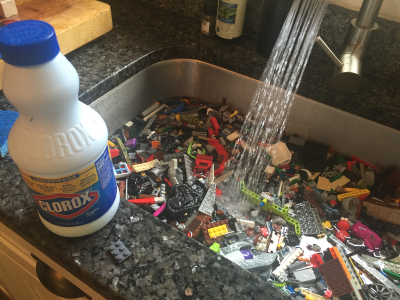 Now, usually this would be the sum of the story, and where the post would end, but because my life is EXTRA GLAM these days, it does not. Because midway through my disinfecting process, I noticed the water level started dropping. Because... 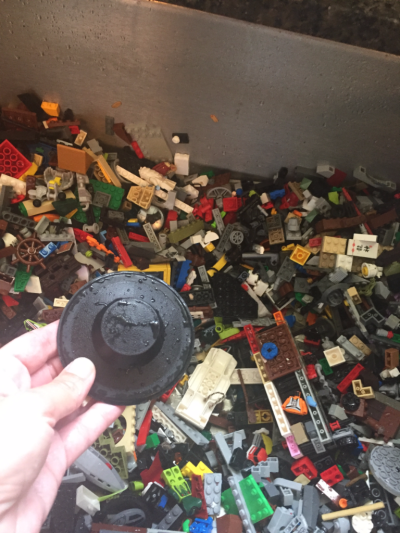 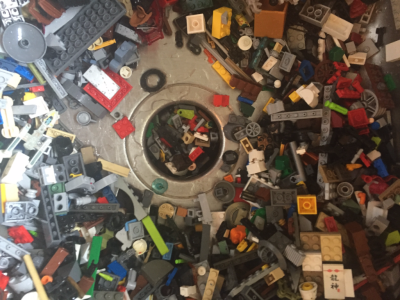 I'm starting to suspect that I am not good at doing things.

(For the record I HAD the sink stopper in place before I filled the sink up. Plz assign proper credit there. It just doesn't seal super well sometimes and got shifted out of place by a small Lego tidal wave of wheeeeee let's all fall into the garbage disposal yoo guyz!)

Jason was picking my sister up at the airport when this happened, so when they arrived they were greeted by the sight of me up to my elbows in the sink, digging out approximately 500 damn Legos (because of course it was all those dumb super-small 1x1 bricks and minifigure heads) out of the garbage disposal, along with a lot of assorted food goo and gunk. Also several fully-intact olives.

I eventually got it all out (save for one tiny minifigure arm that came shooting out of the disposal the next time we turned it on), rewashed everything, and now they are all merrily drying off on the back deck. 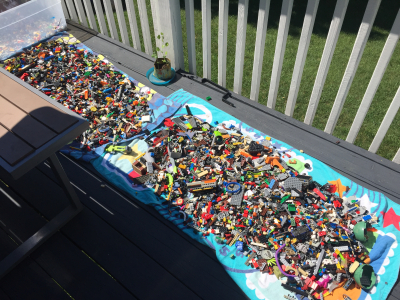 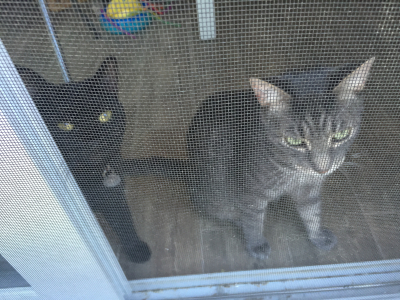 DON'T YOU GET ANY IDEAS. ALSO I FOUND THE BIN LIDS AND SHALL BE STRESSING THE IMPORTANCE OF THEIR USAGE.

Legos are all over my life also. And I am pissed about the prices. "Can I have the Lego Star Wars tank, the one with 6 wheels?" *investigates on Amazon/it's $98. NO.
Lego: Crushing hopes and dreams on a daily basis.

Wash things with Nature's Remedy--it removes any trace of pee smell/markers. Available at Amazon or pet store. It saved an oriental carpet that was target for two kittens.

Definitely agree with Nature's remedy. I also probably would completely replace the bin you have been storing them in. Unfortunately once cats start peeing in a spot, they often return to it. And cats sometimes will poop in a litter box but not pee in it.

I can't do cats... I just can't. I can foster shy dogs, feral dogs, hyper dogs; but cats are a nope. You can keep their peeing in odd spaces because they're mad or sick or just... cats; and I'll keep my animals who go outside and don't jump on my food prep surfaces.

As a FORMER cat owner - you are going to have to train the boys to keep lids on the Lego bins. Once cats decide they want to pee there? THEY WILL PEE THERE humans be dammned because somehow - despite all the cleaning - they still can smell their "pee here" scent.

Wow. Those legos. You do NOT have enough. This is a tragedy. Those poor children of yours; a life of deprivation.

(Legit wow. That is quite a spread and my kid would be jealous and I shall never show her this image. She has the annoying habit of not wanting to deconstruct anything she builds--and I'm not talking the fancy build-this-exact-thing sets, but her own invention from general legos--and so she needs more legos because "I've used them all up, Mama.")

But cats can be trained to use the toilet. Or they can train themselves. We had a cat that did that very thing. My dad noticed that the litter box was not being used (I should be so lucky) and then one morning found the cat sitting on the toilet. Smartest. Cat. Ever.

Next time put in mesh bag and put in dishwasher. That's how we clean LEGOs! Also we have a cat that has a thing for pissing in laundry baskets. What is wrong with them!! Also we let the kids play Lego in the bathtub this week and one pulled plug by accident. Cue me frantically trying to put my hand over drain to sift as they try and get sucked down the drain.

My assvice? Throw some cat food in there. Cats won't do their business where they eat. We have moved food bowls many times when the kitties found themselves a fun new toilet spot.

(I'm kidding about actually putting food in the Lego bin. )

Right now...... go to the pet store and buy Natures Miracle. Bleach works well for human noses, but not so much for kitties. They will keep going back to leave their perfume if they can smell any of their previous bodily fluids. Any.... even a teeny tiny bit......

I agree with Nature's miracle and getting a new bin. Once the smell gets in the plastic, you'll never get it out!

Put the bleach away!! 😁 You don't want to use any ammonia based cleaners on cat pee, because the smell of the bleach lingers & they will then pee on it again to cover the smell. Use an enzyme cleaner like the one mentioned a few times already (I use one called UrineOff that has worked well for me & their website has great instructions). This was advice from our vet when our cat was peeing due to diabetes, and has also worked with our new kitten.

I +whatever the nature's miracle. That stuff does wonders.

We also have a cat that insisted that one particular laundry basket was a litter box. We had to get rid of it. He now only pees in the litter box or the toilet when he isn't satisfied with the cleanliness of the litter.

Would an extra litter box help?

My kids are widely spaced in age and not by choice. I was okay with it/accepting it until I realized it meant that I will be stepping on legos for a good 20+ years of my adult life.

Ok. Our cat has puked on the kids Lego 2x this week. I can relate. Our pile is quit comparable sadly. They love it, and play with enough to justify its existence. We could have paid off half our minivan probably with what we've spent on Lego the past 3 years. 😂 we've probably denied the purchase of an additional $10k, so win, right?

Some cat experts suggest one litter box per cat plus one additional. We have four and they can be real assholios - they go to war with each other or something... but the extra box has seemed to help things. I think.

Yeah, was going to suggest at least one more litterbox...and given the apparent size of your house, maybe even two more?

Additional cat boxes (3 preferably), nature's miracle for cats (important detail), a new Lego tub with a lid maybe, and some cat attract litter in the new boxes = good kitties peeing where they should.

I feel for you having to dig into the disposal...these are the days I'm glad my girls aren't into Legos.

yuck! and ugh and gross, oh the indignities of parenthood. also, i have a 22 yr old son who still occasionally enjoys building a commemorative lego set, like a 12" R2D2 or a limited edition millennium falcon. So, with your 3 boys, you may be doing this a long time! :-)

Yes, yes, yes to extra litter boxes. One on each floor and then an extra would be my guess. In addition to the regular Nature's Miracle, I also use "No More Spraying" to discourage my cats from peeing in places they'd already marked before. A tune-up every other week or so.

Nature's Miracle... I learned something new today. Yes & yes to more litter boxes. Vet told me a MINIMUM of one box per cat, more if possible. And if there are multiple levels, at least one on every level. Also try Feliway. It mimics comforting cat pheromones. Comes in a spray or a plug in thingy. It can help with a lot of behavior issues and it is odorless for people. Good luck!

When this happened to us, I put the Lego in a mesh bag and ran them through the washing machine with some Nature's Miracle. And bin lids became mandatory.

I'm going to need to understand about these fully-intact olives.

There is an interesting article about working for Lego land as a Master Builder on the Atlas Obscura website.Every child's dream job!
Sorry about the cats getting into those boxes.

I know. Not helpful.

Get the Nature's Miracle. Throw out the Lego Bin. Make sure kitties are not playing scare the hell out of each other while using the litter box. It creates territory issues which makes them want to pee elsewhere to assert themselves. This is why we are a One Kitty Home. He may be lonely but that little bastard uses the box every time.

put some loose cat kibble and treats into the lego bins- cats will think lego is food, and stop peeing there.

Also try Cat Attract litter. It's the only one that worked for us.

Like others have said you need to have a litter box for each cat +1. So three in your case.

Just a friendly PSA reminder - healthy cats normally do not pee outside of the litterbox. So barring extenuating circumstances like a closed door keeping them from their box, if a cat that has been happily using the litterbox suddenly doesn't, especially if it's a repeated occurrence, a vet visit is in order. Often it means the poor kitty in question has a UTI and is avoiding the litterbox because it hurts to pee, or they have to go suddenly and can't make it to the box in time. If the kitty is sick, all the cleaning and rearranging litterboxes in the world won't help until the underlying medical issue is fixed. And if the medical issue goes on for too long, it can lead to the cat blaming the pain on the litterbox and avoiding it in the future, making retraining to the box much harder.

If a vet visit brings back a clean bill of health, then yeah, I'd second the recommendation for nature's miracle (also great on all other "organic" stains...) And adding another litter box, especially since you have a large house so having boxes on different levels for easy access might be a good option.

I bought a Star Wars Lego Advent calendar today. For to much money. Don't even ask me why. Sometimes Amazon Prime is not safe for me.

Vinegar also works miracles.
I mean, not clean-all-the-Legos-out-of-the-drain miracles. Those don't exist. But it will whip that piss smell's ass.
Also, this post made me laugh way more than it should have.

Honestly, this is just funny.And interesting too! Thanks for sharing!