Escape From Starkiller Yellow House, Part One Million and Four

A few weeks ago, Beau learned how to open the back sliding screen doors with his paw. Or more accurately, with his toenails, which flash forward to today, has resulted in the screens looking like so: 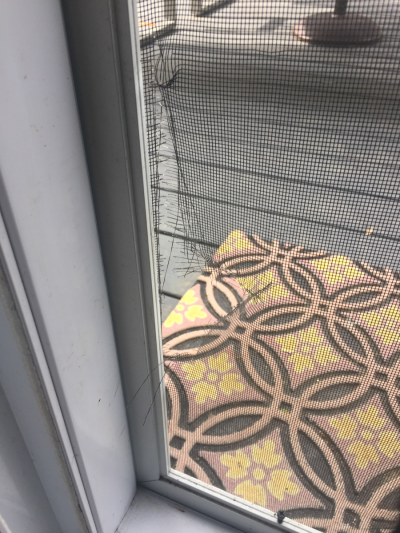 Awesome. He's such a smart dog!! Also SO MANY STINKBUGS INSIDE NOW.

Before the damage got this bad, however, the main problem with Beau's new skill was that he'd let himself outside and then come back inside before I realized that he'd even done it, leaving the screen door wide open for God knows how long while I tapped merrily away on my laptop in a room far, far away.

So that's how Rey got out of the house a few days ago. (Not to be confused with falling out of the house.) I realized the door was open, and then Finn started howling his alarms that he couldn't find her/Dumb Baby Did a Dumb Thing Again, Human Person. I crept outside the basement door and sure enough, there was a small black lump on the far, far side of our yard, and two bright yellow-green eyes peering at me. Inscrutable as ever, I had no idea if she was terrified or basically baiting me towards her so she could be a compete catbitch and go bolting off in the opposite direction.

(My only calming thought [besides her collar and microchip] is that I was 100% sure her butt is too fat to fit through the fence, and 99% sure her brain is too simple to fathom jumping over it.)

I took two steps towards her and sure enough, she jumped up and did that weird sideways, puffed-up Halloween cat run, but towards the side of the house. She then quickly course-corrected and dashed past me back inside.

She then proceeded to alternatively snuggle and yowl at me for the next 15 minutes, like WHAT TOOK YOU SO LONG I COULD HAVE STARVED OUT THERE OR DIED FROM LACK OF BELLY RUBS.

(I could have pointed out that the very door she'd exited from remained open and available for her entire adventure, but obviously I didn't. Because she's a cat. And I am not [that] insane.)

I locked the screen doors after that. Which turned out to be not the best solution, as Beau kept trying and trying to open them, causing more and more damage to the screens. Annoying, but keeping the storm doors closed (especially in the kitchen, while cooking), makes the back of the house unbearably hot. Eventually Beau would give up, and at least new screen doors aren't that big of an expense. Pets! You adorable assholes.

But the fact that the doors were locked made it all the more confusing the other night when a random cat showed up at the FRONT door while we were eating dinner just inside.

"Whose cat is that?" I asked, before it slowly dawned on me.

It was Finn, mewing plaintively to be let back inside. Unlike Rey, whose OH SHIT I'M OUTSIDE coping mechanism was to just lay there like a terrified slug, Finn managed to make it down the deck, around the side of the house (easily slipping his svelte silver fox frame through the fence slats), and figured out how to find the front door so he could be let back inside. Back inside where the food is, because he's no dummy.

As for how HE got out? Allow Simple Cat to demonstrate: 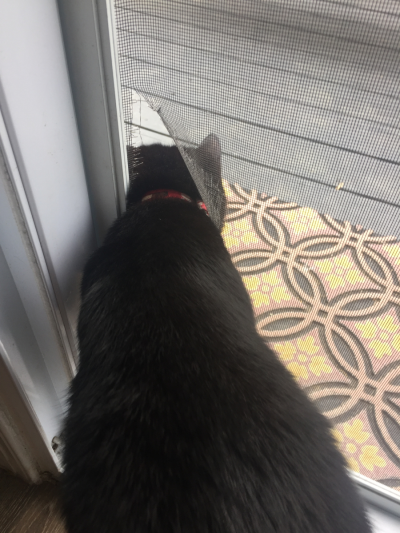 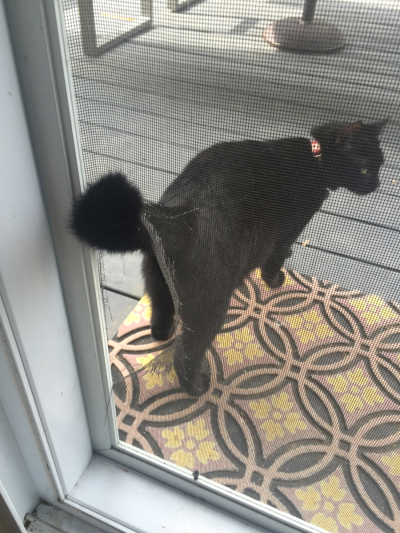 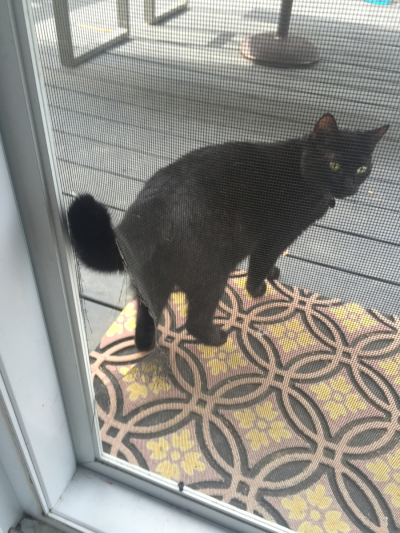 Site design note to self: Change the THESE TWO cat shenanigans category name to *INTERNAL SCREAMING*

Weird idea, that may or may not work because I can't see the entire door frame, but could you put a baby gate at the door? Like, leave the screen closed (to keep bugs out obvi) but put a baby gate on the inside so that Beau can't claw his way out and the cats can't fit thru the current hole.

It might be a total pain in the ass but sometimes all I ever seem to be capable of at my house (also two cats and one dog) is create temporary barricades.

Perhaps a screen door w/ a solid panel on the bottom... Vent the top so air flow, no exits by pets via the bottom. (Dad is a contractor. I think of these things... :)

Our local hardware store (ace) has a "pet proof" screen. You bring in the screen door, they have it for 5 business days and you get it back with a perfect screen that my pets and kids cannot seem to damage so far. I highly recommend it!

Add chicken wire to your screens....

We've done the 'add a piece of plexiglass to bottom of screen door' trick in the past. Stupid pets.

we had a similar dog growing up and we screwed a piece of plexiglass into the frame of the sliding door--not all the way up, but high enough that the dog couldn't reach above it.

also, we hung a bell next to the door and the dog learned to ring it to be let out.

they also make pet doors that open only when a certain animal comes to them (you put a doohickey on their collar) but I'm not sure how quickly they close behind that animal and if that would work for you.

I highly recommend the pet-proof screens. They work! I just bought a roll of it plus a special screen door tool and the stuff that secures the screen, and did it myself. Not hard at all and very inexpensive. Did the front screen door plus the sliding glass door screen, and never had a problem after that. Of course, the dog scratched all the finish off the metal of the door, but that's a story for another day.

I agree pet proof screens really work and are easy to install. ( I used a $ store pizza cutter that was dull and bent and reused the moulding)

My shipoo Stella learned how to open the sliding screen door too. Little sneak. After countless replacement on the nylon screen. I went to Lowes, bought a screen door protector grill. No more ripped screen and disappearing dog!

I've done the baby gate as a temporary solution and the pet proof screen as a permanent one. And our back door had an old school screen door with pretty metal filigree stuff on over the screen. That one was the best. :)

My parents had the same problem and attached plexiglass to the bottom half of the screen door so that the dog could no longer rip it apart. It worked, even if it didn't necessarily look that nice.

This has me rolling on the floor laughing. I only have one (black) cat. But you'd think we had several for all the shenanigans that go on. We have rolling screen doors (like a sideways window shade). He has figured out that if he paws at exactly the right spot on the bottom, the screen retracts. Doesn't hurt the screen, but does give him access to the great outdoors, aka the back patio. Fortunately he's more like Finn in that after a short stroll, he wants to come back in. "Internal Screaming". Yep. That's it.

I love these cats! They seriously seem like the perfect pair for your family. And perfect for those of us who will have years of cat updates from you ;)

I love that Finn yowls when he can't find Rey. Also, I'm really, really glad you have indoor cats, so I don't have to get on my soapbox about All The Problems with outdoor cats.

We have a screen door that our dogs kept busting through to go chase squirrels. We ended up just leaving the screen with an open flap at the bottom and call it our 'red neck doggy door'.

I'm a fan of the pet proof screens! However, my parents had one on the front window because the cat would use that screen to climb up and down to the roof of the front porch, and her portly butt managed to pull said screen out of the frame.

I adore your reader's support and information sharing. So wonderful that so many options and experiences get shared on so many topics!
SUPER GRAND. (and the 'earlier than me' people did a wonderful job re panels to protect the screen and special material screens and even how to put new screens in..... because you may want pet proof screens on some windows as well. And I know other dogs who ring the bell for service ~ which works!!

Go to Lowes or Home Depot, they actually have screens that are dog-proof. I know (ours has survived 5 clawing Siberian Huskies). Don't forget to pick up some spline (because the stuff holding your current screen will undoubtedly snap into a million pieces, and a spline roller so you aren't using a spoon to smash the spline into the groove.

I don't know what a pet proof screen is, but all my screens are metal, not fabric. I have one that wasn't and I replaced it with metal screening because my dog tore it open. Screen isn't hard to install, just get the proper tool for putting in the spline and you're good to go!

I'll probably be screamed at but can you keep a spray bottle of water close by and spray Beau when he attempts to scratch at the door? I have done this with our cat as she was destroying the wood holding the glass pane in on our back door. In your case I'd also install the pet proof screen as well as the plexiglass at the bottom! :)

Omg the sideways puffed-up Halloween cat move is the worrrssst!!