Our first year with a "real" garden has been... 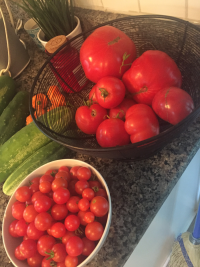 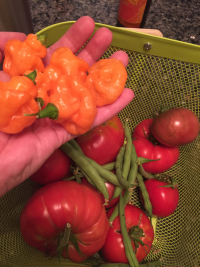 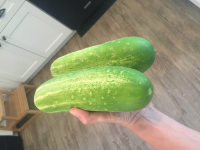 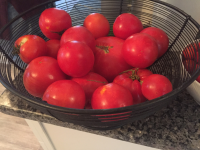 ...bountiful, to say the least. And very, very delicious. 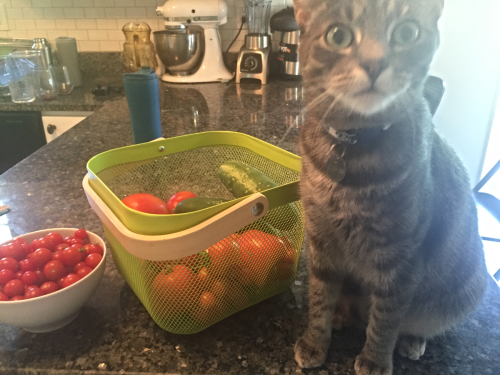 (Not pictured, because we ated them: turnips, radishes, carrots, kale, zucchini, peas, bell and chili peppers, most of which we'll be getting round two or even three of shortly.)

It's also been a bit of a learning process for us, as 1) no human family, no matter how bonkers-crazy they are for tomatoes, can possibly consume the INSANE number of tomatoes we planted, and I say that as someone who has not eaten a non-tomato-centric lunch in four months, has made sauces and jams and salads and soups, and has given away bags of tomatoes to anyone who comes to visit. 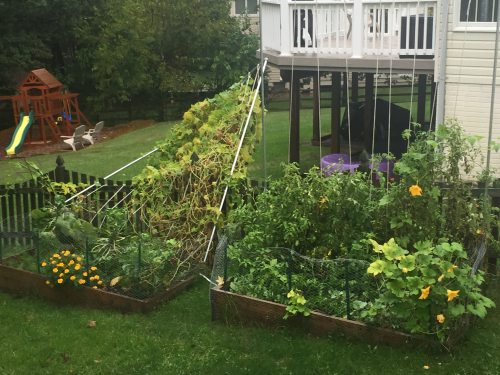 We're having some nasty weather this week, and last night the metal frame Jason screwed into the raised beds gave up under the weight of a 10-foot high cucumber plant. I didn't even notice until after I got back from the bus stop.

And while I'm SURE our neighbors were THRILLED at the sight of our giant-ass plant dangling over the fence (at least upright it served as a improvisational privacy hedge?), they did not poach our vegetables.

They absolutely should have poached our vegetables. At least one or two? Perhaps I'll take them a bag of cucumbers and tomatoes as a desperate bid to rid ourselves of this plague an apology.

Well, it's almost time for lunch, so I suppose I should make my usual tomato sandwich with a side of tomato-cucumber-mozzarella salad, followed by a cucumber sandwich with a cup of tomato soup maybe topped with some cucumber and maybe more tomato aaaaahhhhhhhhhh it's vegetable inception halp halp

Posted at 11:23 AM in breathtaking dumbness, houseness, Jason | Permalink | Comments (23)

We are doing something wrong. We need lessons from you. We can't get our garden to grow at all.

Can you write about how you decide what/how much to plant? And when? And how? Or maybe just direct me to a resource that you found helpful? My husband and I want to do this but honestly we are so damn lazy we need a lot of direction.

I would be making fresh salsa. Not the cooked kind! Also spaghetti sauce and either canning it or freezing it.

I'm curious how you feel about Blue Apron this summer since you have your own garden now? I finally joined Blue Apron based on your posts, and I do really like it, but it's been weird to get their boxes filled with the same veggies I have growing in my garden. Seems... I dunno. I prefer to use my own veggies (home-grown, delicious and fresh, organic), but kind of makes me a little crazy to just throw their veggies in the compost.

I'm thinking I might take more breaks from Blue Apron during my garden season, and ramp it up in the winter (kind of like what I do with my CSA deliveries)

You can stick whole tomatoes in your freezer for the winter. Run hot water over frozen tomato to peel it, then chop up for sauces and soups (not like fresh). Great summer flavor without the can!

Can you donate to a food pantry? Ours will take fresh produce for those that can't have gardens of their own.

You need to add gazpacho to your lunch rotation!!!

Bloody Mary mix. (It's a bit of a process, yes, so just throw those tomatoes in the freezer until you've got an afternoon.)

My God never plant eggplant. I still cannot eat eggplant with any regularity because of the one summer my father planted three hills of them. It was s shit ton of eggplant. And we ate it every possible way....

Or ask at the closest "retirement home" or retirement center if they would like to have your excess...... Because home grown does taste different and more flavorful and old people do remember and appreciate the differences.

I would kill for some of them. I haven't had a good tomato since I moved to AZ from MA 16 years ago.....

Send the cucumbers to California. I adore them, and will save you!!

My grandfather invented a recipe he called sausage, green beans, and tomatoes, after a particularly large harvest of green beans one year. I use a twelve-inch skillet. You just sauté a pound of sausage, add in an onion (diced small) and a couple of cloves of crushed garlic (as I recall, you may be allergic to onions and/or garlic, so just leave them out!), then toss in two chopped full-sized tomatoes, and as many green beans as the pan will hold (yes, that's how I measure them). Cook until the green beans are tender, about 15 minutes, I'd guess. It's delicious. My grandfather left it at that, but I add a tablespoon or so of balsamic vinegar, to really make it tangy. Serve over your starch of choice--we always used polenta because my grandfather was Italian. Just in case you need another tomato recipe...

Make tomato sauce and freeze in quart sized freezer bags! We go through like a quart a week all winter long. Probably because we pretty much have either pasta with marinara sauce or chicken Parmesan in any given week... Sometimes both...

For those who need info re planting and caring for a garden, check with your local Agricultural Extension office. They have guides for your area, how much and when to plant, how to harvest, recipes, the works!

Hi Amy, I'm a long-time reader, and just wanted to let you know that since you redesigned your site, I'm no longer getting your updates on my Kindle. I'm VERY disappointed about this because I looked forward to reading your updates at the end of the day without having to haul out my computer. Will this change, and will it start being delivered to Kindle again?
PS: your garden is just breathtaking!

When we lived in PA our garden was CRAZY. I've never had a garden produce anywhere near as much in any other climate. When we got totally overwhelmed we started roasted all our tomatoes It makes fantastic tomato sauce or salsa or just to use in soup. But the real bonus is it takes many, many more tomatoes to make your sauce. We just chopped the roasted tomatoes and frozen them in freezer bags.

Roma tomatoes
All I do is wash and let set to dry for a few minutes and then
Put the (whole) tomatoes in zip lock freezer bags and freeze
Then I pull out all winter for chili and soup
Very easy
Not sure if it works for all types of tomatoes
But if you have abundance, worth a few experiments.

Ran across this while looking for a Mac and Cheese recipe and thought of you!

But the cat's face in the photo with the tomatoes. It's like he's screaming HELP US with his eyes!!!

Canning. Seriously changed our lives once we started. Fabulous tomato sauce in the middle of January. Great pickles whenever. We also have rhubarb which tastes nasty any later than July and we can it like crazy. You absolutely can do the freezer, too, but we don't have room for a chest freezer. Yum yum yum!

Absolutely second (or third?) canning. Not only great for the winter but tastes so much better! Most tomato-based mixes don't need to be pressure canned, you just need the hot water bath method. Same with pickles, and there are a ton of options/recipes. (For general reference I highly recommend the Ball Blue Book of Canning. All the info you need plus recipes, I use mine all the time.)
And for anyone who sauces large amounts of tomatoes, the Victorio food mill changed my world view on working up fresh tomatoes for sauce or juice/pulp. (Here in Iowa you not only usually have your own bumper crop, you can usually get plenty from friends/neighbors/family that also has too much and is happy to give them away.) I hated peeling tomatoes, it was so time consuming and messy. Now I just chop them up and run them through the food mill. Small hole screen for spaghetti sauce, bigger holed screen for salsa or for plain canned tomato juice/pulp. Very little waste and so quick. The kids often help too, they love to crank the handle for me. Also great for jams (peach jam is a family favorite, and no peeling peaches!) I use a large electric roaster pan for doing big batches of salsa or spaghetti sauce to can. (I finally found a homemade spaghetti sauce recipe that doesn't include a jar of spaghetti sauce as an ingredient and that I actually like, and my husband and kids went crazy for it. (Made lasagna and my daughter said it was the best ever, I figured she was just being complementary, then the hubby tried it and declared it absolutely hands down the best I had ever made, you can't buy store made jars anymore. Guess I set myself up for that one!
http://www.tasteofhome.com/recipes/homemade-meatless-spaghetti-sauce
)