Anybody remember all this, from the good old days, back before somebody taught Ezra how to put a hand on a popped-out hip, punctuate every sentence with a pointed "OKAY?" and a facial expression dripping with bershon? 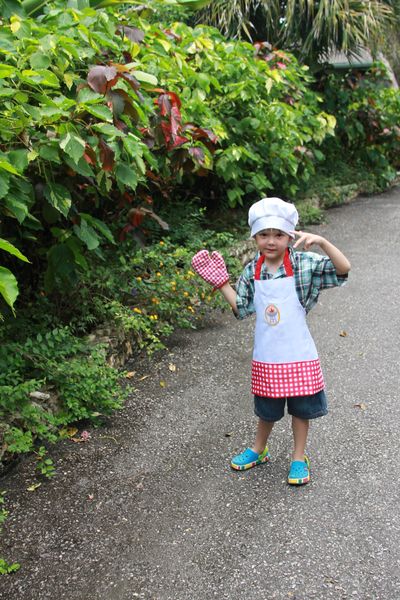 The little chef costumes had a pretty good run, but alas, he is officially far too gigantic for them now. Ike will wear it from time to time, unless Ezra hides in a fit of possessive pique GOD HE'S ONLY EIGHT SWEET MERCIFUL ADOLESCENCE. 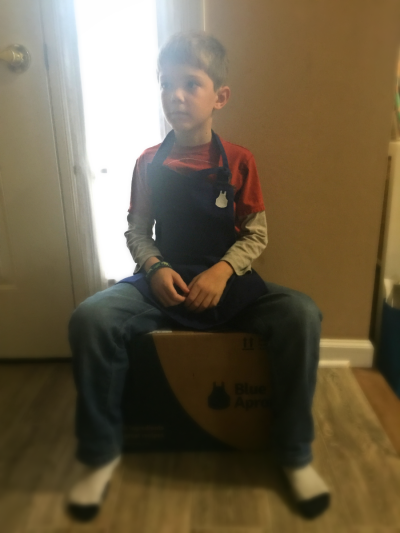 He recently got a styling new upgrade, though. 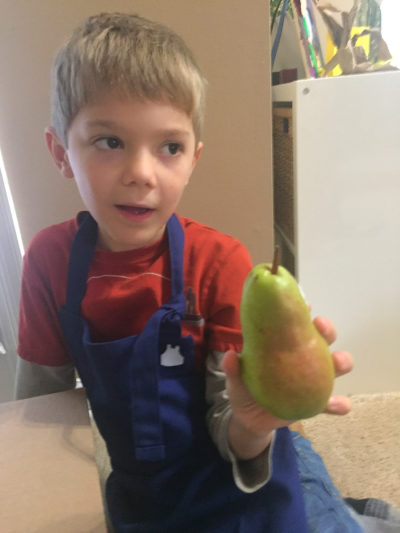 (It was very important that I photograph him holding this pear, for some reason. He had a lot feelings about this pear.) 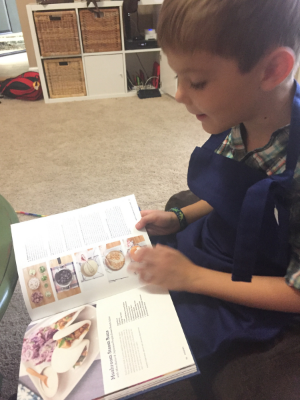 Even more exciting was a proper grown-up cookbook, which he decided had to be for him, because Blue Apron must know what a good cook he is. I mean, they sent him an official chef-in-training apron and everything.  And their Winter Cookbook, full of many of our favorite recipes and a whole bunch of new ones (including DESSERTS, which YAYYAYYAY).

(The mushroom steam buns with purple potato salad are at the top of EVERYBODY's dinner wish list now. And I already have a box of buns in the freezer,  just waiting for some filling inspiration. As I believe I've mentioned, my children will eat ANYTHING in either a slider roll or a steam bun, so I'm always looking for veggie-heavy trickery.) 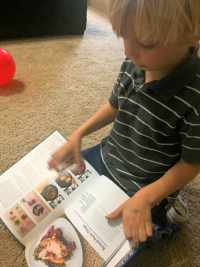 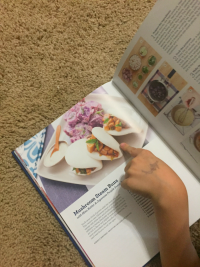 But if dinner isn't presented in a slider roll, steam bun or pizza-like form, Ike is honestly just as challenging as ever. He loves food, loves eating, but when the five of us are all eating together it's an hour-plus long descent into negative attention seeking behaviors, which we all try our hardest to remain unbaited by. Sometimes he eats. Sometimes he waits until everything is cold and unappealing to suddenly shovel it all in ravenously; sometimes he just has to find a way to survive unfed until breakfast because nope, not eating.

Meanwhile, Ezra's like, whatever, I'm voting for broccolini and goat cheese quiche for dinner. Let's do this, there's a pear involved! 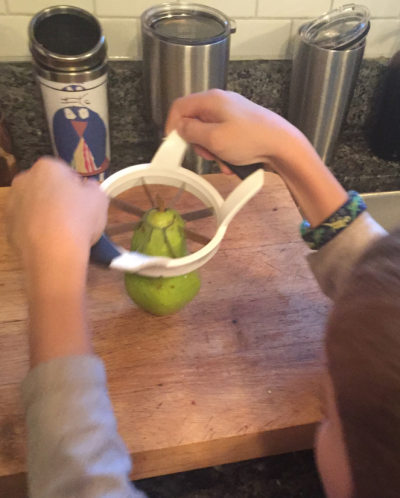 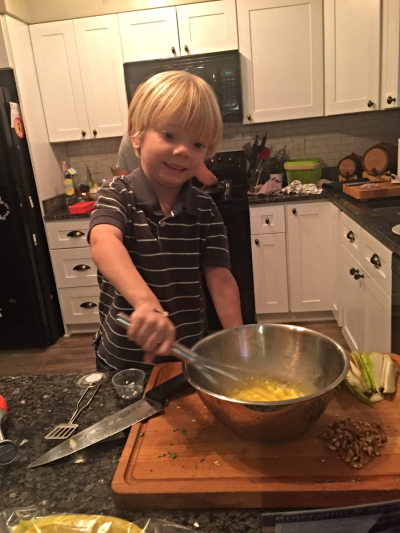 Ike was initially upset at the sight of the broccolini, but seemed encouraged by the presence of eggs, cheese, pear, walnuts and a pie crust. He even made the salad almost completely by himself, and carried it proudly to the table. I have no doubt that having him pitch in helps, at least a little bit. 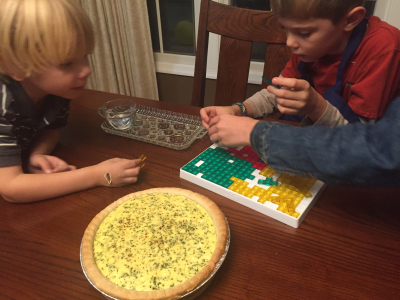 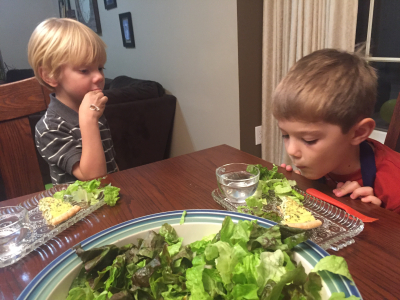 The quiche was DELICIOUS. Jason, Ezra and I each had two slices, and nuts-in-big-crunchy-salads is a surefire way to get Noah excited about eating his vegetables. 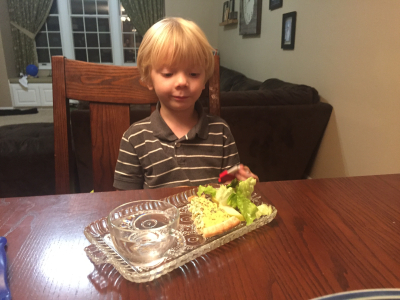 And then there was Ike. 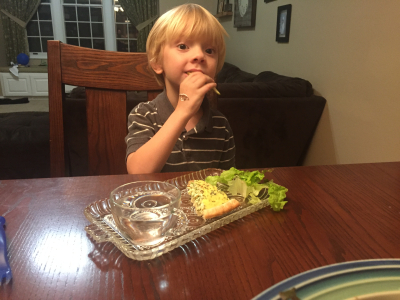 After much, MUCH stalling, he ate the salad, then took a microscopic bite of the quiche. He took a slapstick-y fall off his chair, then in the quietest voice possible announced that he liked it. (Of course you like it! It's shaped like a pie and full of cheesy goodness!)

It still took him another hour to actually complete the act of eating it, but hey. He did eat. Blue Apron can only perform so many dinnertime miracles in a month.

Want to give the recipes a try but not ready to commit to the service? Check out the Blue Apron cookbook collection. (The Autumn edition is currently on sale, btw...)

I signed up with BlueApron because of your blog in January, and I cancelled it a few months ago because I literally could not go a full month without some kind of major issue that caused them to send me a refund for the week. I love the concept but for the lack of variety and the terrible customer service it's just not worth it.

I've been reading (and loving) your posts about Blue Apron as long as you've been writing them and a few months ago (when we were awaiting the birth of our second child) convinced my husband to give it a shot. We love it so much! Our four and a half year old daughter will not even try any of the meals so we still have to whip up something for her BUT I am hoping that we can switch to the "family" delivery at some point down the road. Love it so much!

I saw a chef costume when I was out today :)
Are the boys playing Blokus in that picture? My favourite!

I had the same experience as Lis Bokt. Missing signature seasoning, condiments leaked all over (honey was the worst), and so on. And when they offered me a refund, it always only applied to the very next week, which I needed to skip.

Then all the recipes got samey. Every week had three options: 1) ground meat on a bun or a stick, 2) fregola salad, 3) fish. This has been especially bothersome because I see you and other bloggers getting totally different food and recipes than us every month. What's up with that? We like a little variety in our home-cooked meals and we didn't get it from Blue Apron. I'm glad it's working for you guys, but we had to cancel our subscription due to boredom and regular screw-ups.

Ummm., now I am worried. I just signed up with Blue Apron yesterday, but after reading Lisa Bokt and Ananas comments, I'm hoping I didn't make a mistake!

I had a positive experience with Blue Apron when my husband severed a tendon carving a Jack-O-Lantern last year (seriously y'all, BE CAREFUL), had to have hand surgery and couldn't drive or lift anything, including our 3 month old, for 10 weeks. Blue Apron was an awesome convenience during that time. Then the hand got better and life got back to normal and Blue Apron started to feel a bit repetitive and expensive. But it was so great for a bit. It would be a really great gift for a family with a new baby or when someone is sidelined with a medical issue.

I got Blue Apron for my husband for Father's Day after reading your blog posts. It was THE.BEST.PRESENT.EVER! He loves it and so do I!

I have had a positive experience with Blue Apron so far as well, and we also got the Brocollini Quiche and pear and walnut salad. Delish. I haven't had any issues at all.

P.S. Don't know how to spell brocollini and too lazy to go back and look. :)

We're a military family, living in Japan. My daughter (a month younger than Ezra), is not a picky eater, but doesn't like to try new stuff. I was worried when we moved here, that she would refuse to eat anything new. Nope! Girl has totally surprised me! If it's new and Japanese, she will try it. Buying strange and new fruits and vegetables at the store, no problem. Something new at a restaurant, that we have to use chopsticks for, let's go for it! I've been very pleased. Now I just have to figure out how to cook all this stuff when we get back to the States.

We have been doing BA for about 9 months.
Thanks to your blog. What's not to love? No more, "what's for dinner?". No wasting food. Have we missed an ingredient before, yes. Not a big deal, we know how to improvise. We know it's wholesome and organic. We totally love it.

I tried Blue Apron and just couldn't with all the packaging. So. Many. Tiny. Little. Containers. and plastic bags and boxes and packaging packaging packaging, none of which was reusable. It also didn't really save a lot of time because it's still all the chopping and cooking. I'm glad it works for some but it is definitely not for everyone and I really don't like the greenwashing they seem to give themselves because PACKAGING.

I tried Blue Apron, largely because of Amy's posts about it. Overall, my feelings are positive, but it's not something we get on a weekly or even monthly basis.
Good:
1) Recipes are super clear. I love how they are laid out so everything is done at the same time!
2) Most recipes are delicious, seasonal things I wouldn't probably think to make on my own. We have added several recipes/techniques to the regular rotation.
3) Everything is portioned for the recipe! No buying a 12 oz bottle of obscure sauce or giant head of cabbage I only need a quarter of.

Not good:
1) Packaging. They say it's all recyclable, but I live in Seattle where *everything* is recyclable (including food) and a lot of this stuff can't actually go in our recycle.
2) Prep time. It's probably quicker than making the same recipe without pre-portioned ingredients, but usually longer than I typically take making dinner.
3) No leftovers. We like to make enough for dinner that we have lunch the next day. Blue Apron yields one generous dinner portion per person, but not enough for 2 meals per adult.
4) Cost. 'Nuff said there, figure out your budget-- for us, it's expensive.

I loooove the Blue Apron steam buns but don't know where to buy them! Amy- where did you find your box of frozen ones? (Thank you!!)

Our challenge with Blue Apron was the packaging failures. I liked the convenience and the recipes. But three times in three months of every-other-week deliveries, we had to call because something was rotted or a bag seal was opened and poured rice all over the box, or the container of flour was cracked and made a huge mess. The last straw was when I opened a box and 5 fruit flies came swarming out. Nope. We canceled it that day--the fourth call.

Just to keep things balanced, I want to share that we've had Blue Apron for over a year and haven't had any issues with freshness at ALL. There was a period when the bottles leaked about three time in close proximity, but since I wrote to them, that problem stopped, too. Someone said they had bad customer service, but the two times I needed to contact them, they responded to me immediately and took steps to make me happy, even during a snowstorm that was out of their control.

Everyone's personal tastes are their own, but we haven't found it repetitive. That could be because I tend to be a "rut" cook myself, so the range they offer is way beyond what my family would get without it. There seems to be a greater variety in the two-person meals than the four-person family meals, but I'm not positive about that. We don't have leftovers very often, but that's typically because we take too much the first time. :)

I have to admit I have no idea what a steam bun is.

I just steal the Blue Apron recipes and add stuff to the shopping list. And they have recipes for side dishes that aren't rice and frozen peas!

Put me in the " happy" column, too. We've been getting it more than a year, and I think I've had a small problem maybe twice? The bigger problem is not letting the stuff go bad, because even with help, I still suck at dinner.