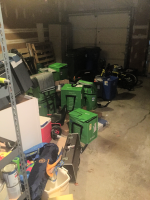 It's hard to believe we've been in the Yellow House for over a year. Especially since there are still boxes in the basement and several closets, and approximately 4,509.023 Yellow House-related projects we were totally going to do right away, and yet here we are. All the walls are still beige or brownish beige. I despise the ceiling fans with the force of a million ugly ceiling fans turned up to high. I still haven't replaced the super dark velvet sadness curtains in our bedroom. Framed art and photos sit propped against walls where I MIGHT want to hang them, but am still not emotionally ready to commit to a nail hole. Other than that, the house is very lived in and homey, by which I mean cluttered and messy as fuck. Not like, gross messy (unless we're talking about the boys' bathroom but WE DON'T SPEAK OF SUCH THINGS), but just...kid messy. Five people who tend to set objects down and wander away from them and three pets who all have a lot of toys/scratching posts/pet beds messy. Small child who is currently obsessed with ripping up small pieces of paper and scattering them everywhere and a mother who... Read more → 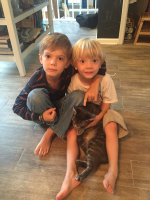 Something has gone terribly amiss in our hand-me-down clothing system. Clothing size math makes me crazy, but it seems everything has collapsed due to a bad ratio of non-worn-through-the-knee pants to children-with-weirdly-similar-leg-lengths, combined with our usual oh-crap-it's-suddenly-chilly-quick-try-on-last-year's-pants seasonal unpreparedness. (The Legs Collective, back in simpler, summery-er times.) Noah's now wearing clothes long enough that they're typically destroyed before they're outgrown, greatly reducing what I can pass down to Ezra. Ike's legs are insanely long that he's practically wearing the same pants size as Ezra (who is a good head taller but super extra skinny), leading to a critical pants shortage. Ezra has attended school all week in jeans that are noticeably two inches too short, which ALSO highlights his complete lack of socks. (I mean, we have millions of socks. There are literally socks everywhere. None of the socks match, and also we are still besieged by the mysterious Zombie Baby Socks, because all I ever do is throw out or donate baby socks and yet THERE ARE STILL BABY SOCKS IN THIS HOUSE. But matching socks that fit them now? Pffft. Pipe dream. I could go buy three dozen more socks tomorrow and we'd be tapped out by Saturday.)... Read more →

It Takes a Lego Village 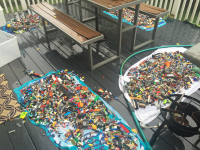 Less than a week before Noah's birthday, I still didn't have a present for him. Or even a vague idea of what present to buy him. I mean, obviously it was going to be Something Lego, because look at how Not Enough Legos We Have: (We bleached and Nature's Miracled the entire stash, just to be safe, then laid them outside to dry. And then we forgot about them and it rained. And then it rained again and again and now they are finally ALMOST dry and falling through the cracks in the deck and it's basically my Lego Anxiety Dream brought to terrifying life.) What Noah REALLY wanted was a discontinued Back to the Future set. Which I found on eBay for a pretty ridiculously high price, considering the size of it, and so I informed that NOPE, NOT HAPPENING. PICK AGAIN. His SECOND choice was a not-discontinued but even more bonkers expensive Ghostbusters set, because he has suddenly landed smackdab into the 1980s fanboy demographic. I again said sorry, no, we're not buying anything that expensive. His third choice was disappointed silence. Crap. One of the many small businesses from downtown Ellicott City is an independent Lego seller/reseller,... Read more →