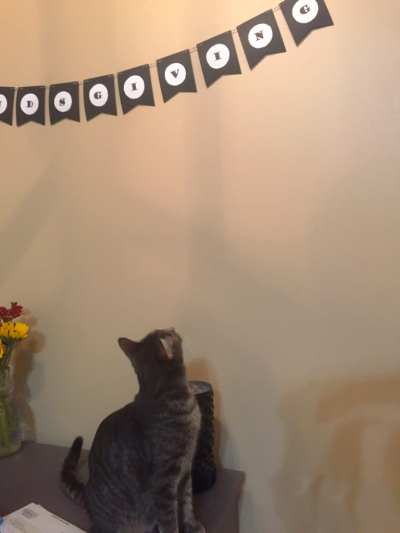 We hosted our second-ever Friendsgiving potluck on Saturday, and once again, I forgot to take any pictures to prove that it actually happened and people actually showed up, or that the whole thing isn't just a yearly shared delusion of ours, where Jason and I serve multiple turkeys to a collection of brooms and mops we've placed around our dining table. 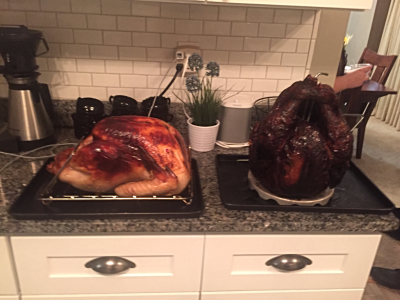 (Traditional roast turkey on the left; deep fried on the right. Possible sighting of a human guest's arm in the background.)

But seriously, we had about 25 friends and neighbors this time, which was much, MUCH more reasonable than last year's ALMOST FORTY, most of whom never left the kitchen because we stupidly put all the booze and appetizers in there. This year I was a lot more strategic in food/alcohol placement so we more or less avoided any bottlenecks, although setting up the bar in the lower-level family room meant every time you wanted a refill you were going to have to deal with some stairs.

So you know, drink responsibly folks, or you're gonna end up as a party foul anecdote on the Internet.

No one fell, but the night before the cat did this: On Friendsgiving Proper, that same cat stepped over a lit jarred candle on a different table and like, stood there over it until our card game was interrupted by the overpowering smell of burnt fur. He was promptly rescued by a human as he showed no real inclination to do anything about the situation himself. His belly is fine, his fur minimally singed, but his status as the Smart One is permanently and officially revoked. I think they're both defective idiots.

Friendsgiving 2016: The Year The Cat Almost Caught Fire But Didn't.

Oh, I just found one whole other picture I took, while I was making the cranberry sauce. Because THRILLING. 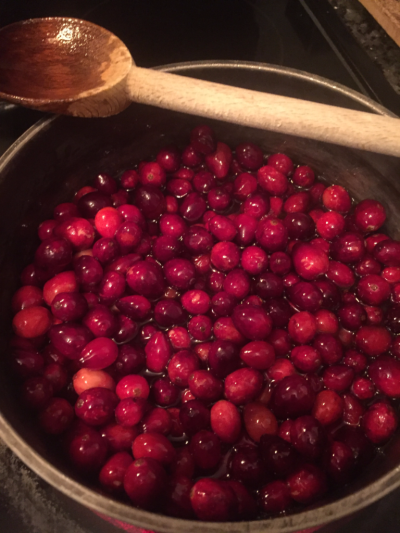 You need to make this recipe on Thursday, by the way. (Or today! It'll keep and only get more delicious the longer it sets.) I've done a few variations on boozy/bourbon sauces, but this year I used vodka and Cointreau, and damn, it was PERFECT. All the taste and booze of a Cosmo cocktail on your plate, without the embarrassment of being a person who still orders Cosmos. I will be doubling this one next year because it was gone in a flash and I barely even got any. Possibly because it was the only alcohol that didn't involve stairs.

Thanks to everyone who came and brought delicious food and wine and company! I hope you had as much fun as we did. Please feel free to testify to the fact that my house was actually clean and that you are not, in fact, a broom on a mop wearing a hat and sunglasses. Kthx.

I always take pictures of my fresh cranberries! They are so beautiful, especially after a couple of glasses of wine!

My image is broken. I am not thankful. (Why.)

I set my cat on fire once with a candle. I lived with a boyfriend at the time who was a complete fire phobic. No lit candles ever for any reason or Christmas lights, nothing. One day he was away overnight and I had worked outside all day and was about frozen solid, so I drew myself a hot bath. I took one small candle and lit it and placed it on the edge of the tub.....nothing flammable, all tile bathroom, a tub full of water....what could go wrong? My cat jumped up on the edge of the tub, walked casually over the candle, burst into flames and ran from the room into the bedroom. I jumped from the tub sliding all over the place, found the cat under the bed, wrapped her in a towel and then examined her........I guess the flames got to the oils in her fur and extinguished. No harm other than singed whiskers. But the whole upstairs smelled like burnt hair. And i had to open all the windows for several hours to get the smell out and then freezing cold all over again. Kitties and candles don't mix.

Those turkeys make me hungry. I'm so excited about Thanksgiving this year. I've been assigned alcohol, and I feel like my whole life was preparation for this one glorious moment.

LOLing at Meredith's story and also WTF with all y'all's stupid cats? My cat is missing quite a few brain cells, and it's never occurred to her to investigate a lit candle. Guess I've been lucky!

I attest to the fact that real humans were there! And to the singed cat smell. Oh, and don't forget Beau getting out of the back yard when the gate blew open...and coming around to wait for us to let him in at the front door!