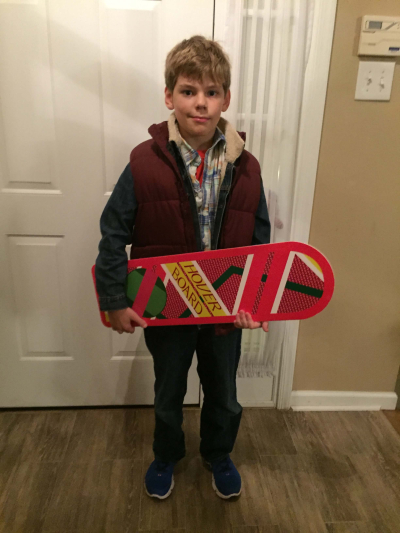 The great Marty McFly costume, which won for Mom Favorite because I bought actual useful clothing and accessories (ON SALE), combined existing wardrobe elements, and only spent $10 on that plastic-y cardboard Hoverboard

. (Which I've been hiding in my closet because it's going to get destroyed in 3...2...1...) Noah loves it too, because with the jacket, vest and watch all being practical and non-costume-y, he gets to be Marty McFly every day. And who wouldn't love that. I'm asking.

He met up with a group of friends from school while trick-or-treating and was so, so happy. 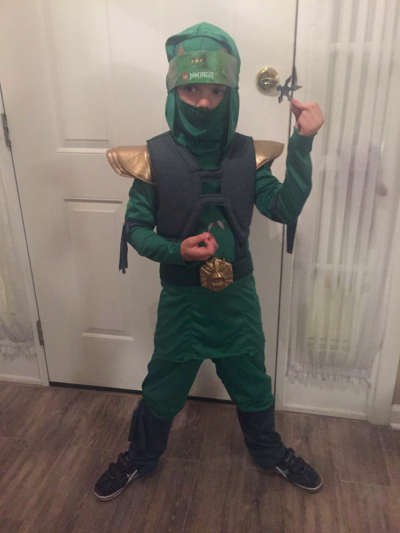 The Green Ninja Redux: This time I did not even attempt a DIY o' Fail version, especially since now you can actually buy a real Lego Green Ninja costume

. But Ezra chose this generic version instead, and added his own Ninjago headband

. Other than some stains because he kept trying to wear it while also eating breakfast, he looked really great.

I should have insisted on warmer underlayers, though, because he's home sick with a terrible cold today. As is Hobbes, who apparently ate too much Halloween candy last night and now has "the throw-ups." 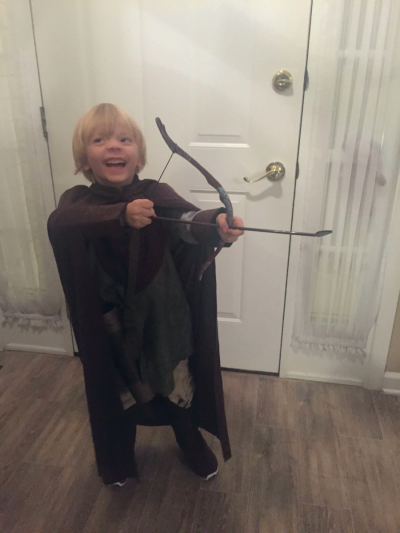 , mostly so he could carry around a bow and arrows and drive me batty with a costume that contained over half a dozen different elements that could all unbuckle/unfasten/fall apart at any given second. But he rightfully observed that he did need to wear the wig 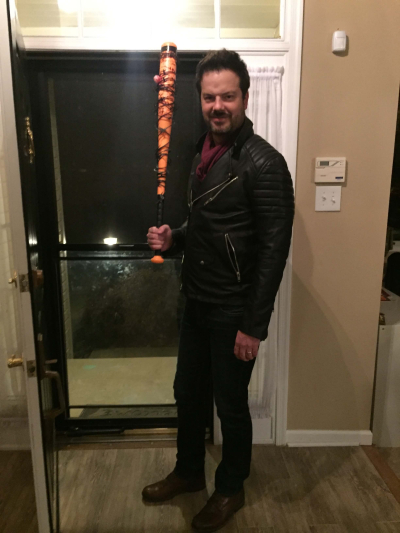 I lazed out this year and re-wore my vaguely questionable Black Widow suit, but Jason got some last-minute inspiration and went as Negan from The Walking Dead. He got the jacket and scarf from H&M, a plastic bat with some fake blood and razor wire, with an eyeball for that extra special touch. It was a huge hit at the party we went to over the weekend, although most people were initially like, "TOO SOON MAN" or "YOU FUCKING ASSHOLE I HATE YOU." 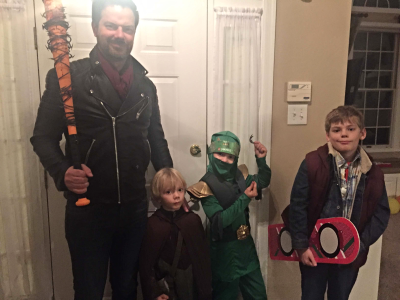 The whole gang, looking wary to ham to generally already Over It.

We did not get a single trick-or-treater at our house. Partly because most people didn't bother venturing down the cul de sacs when there was a big cental block party to hit and get all the candy you could fit in a bucket, but possibly because DAMN, we gotz some major competition in the candy generosity department: 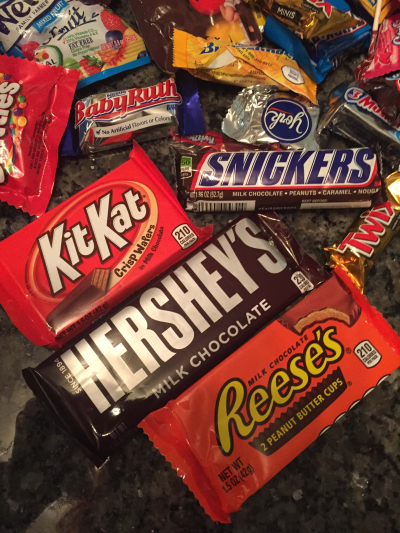 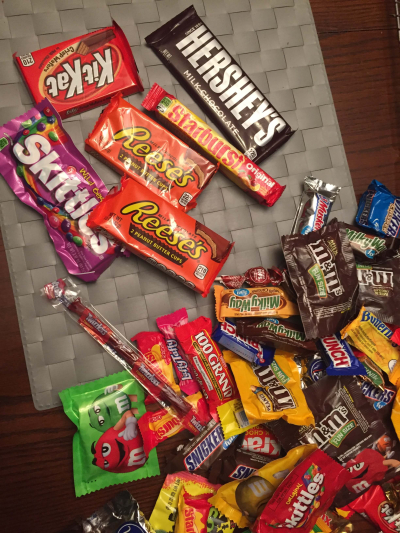 (That's just from two out of three of the hauls. Halp.)

That Negan costume is amazing and also TOO SOON. Love the eyeball.

I love Marty McFly... wish I'd thought of it 10 years ago when my son was young enough to a) trick or treat and b) listen to my costume suggestions. 😊

My son scored a full size candy bar and it like he hit the MF jackpot!

It is not your fault. Ezra doesn't have a cold because of not having enough under layers, that is an old myth. Colds are spread by being in contact with germs.

All four of your boys win! What a great candy haul!

OMG. Are those...full size?! I thought full size candy on Halloween was a myth!

I *lerv* you, truly, but oh my goodness, your hyperlinks have little yellow stars next to them now with corresponding pop-ups to Amazon at the bottom of my phone and then there are the Facebook Instagram Pinterest Twitter buttons at the top of the screen as I scroll and then all the real estate is gone and UGH! First-world problems, totally, but it all makes me miss your old site even more than I already did. :-/