I dropped my phone on a sidewalk in Baltimore about a month ago, just barely cracking the upper-right corner. I've done SO MUCH WORSE to SO MANY PHONES, though, that I decided it wasn't even worth repairing...I was planning to upgrade after Christmas and demote this one down to full-time Kid Restaurant Entertainment/Angry Birds Duty anyway. Considering the kids still routinely argue over who gets dibs on a second-gen iPad with a completely shattered (and alarmingly sticky) screen, I figure they wouldn't mind yet another slightly imperfect hand-me-down.

My phone, however, had other plans, and went on to basically disintegrate, crack by crack and chunk (!) by chunk.

While the initial cracking was minimal, I popped it out of the case and  realized the body was a tiny bit bent. So over time, I'm guessing, the stress just got to be too much (I FEEL YA, PHONE, SAME) and the cracks started to spread. Then large-ish pieces of the screen started flaking off, revealing the backside of the camera and other metal things that 1) are hot, and 2) will shock you if you do something inexplicably stupid, like lick your finger before touching them. Why, self? You spent an entire year resisting the Red Button and then two days with a smashed up iPhone you're like, hmmmmmm I wonder. Go lick a flagpole, why don't you?

Eventually, the touch screen stopped working in a couple places, which: FINE. I CAN WORK AROUND THIS. I AM BEING STUBBORN AND NO ONE CAN STOP ME. I moved apps around the screen to bump the one I wanted into a working area, I rotated the keyboard around several times to type and send text messages, I relied on autocorrect to hilarious and nonsensical results. I could open the camera app but couldn't take a picture because the button was in a dead zone. Candy Crush was an exercise in futility because yeah, I SEE that move but I can't MAKE that move.

Yesterday it froze up, so I decided to restart it, foolishly forgetting that thee of the four numbers in my passcode were all in dead spots, officially and completely locking my dumb self out of my phone for good. (UGGHHH BLURRGH WHY WAS I PROGRAMMED TO FEEL PAIN?)

Award for Most Awkward Photo goes to this one, taken with my unwieldy laptop. I also called Jason using it to tell him that my phone was completely gone so don't bother texting me about anything, to which he was like....but but but how did you make this call?? are you magic???

I was like, no dude, just Skype. Although I agree it's a pretty magical time to be alive and without a landline.

So um. Don't text or call me right now, I guess. I'm going to go see about getting it repaired, AGAIN, if it's even possible, and in the meantime show some FUCKING RESTRAINT when it comes to all the remaining loose chunks of screen that I kinda wanna pick off, one by one like old nail polish, just to seeeeee.

But before I go, here are a couple of the last photos I was able to take with it, which are fittingly important photos of my cat sitting in a pile of fake pre-lit wreaths that are still waiting for me to go buy some dumb bows or whatever already. 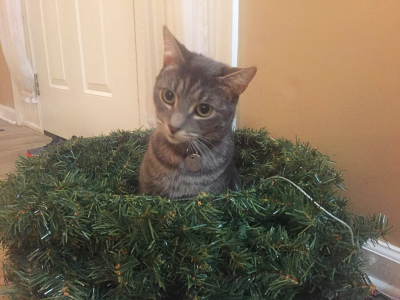 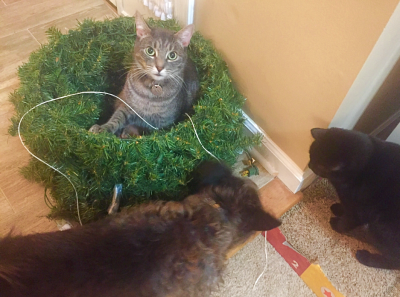 I've been using tempered glass screen protectors, and silicone cover, to amazing results of "dropped on asphalt or ceramic a couple time with not a scratch or crack". I'd invest the 2$ on ebay next go-round!

I highly recommend the Apple iPhone Upgrade program. Small monthly lease payment, and free Apple Care, you don't have to wait on your carrier to be eligible for an upgrade, AND no gigantic up front cost. All the win.

To tie in with you licking a (presumably frozen) flagpole...be careful with cellular phones. Fra-gee-lay they are!

Sorry about the phone chaos. But I'm really here to comment on the cat pix, obvy. Cat fort, everything is a cat fort.

I have done this so very many times, so my sympathies. My current phone is juuuuust about 2 years old and I have this rubbery Tech21 case on it (that is standard case size and not a gigantic whopping otterbox, which I hate) (sorry, otterbox lovers) and my phone has made it through with NARY A SCRATCH. btw, I also kind of hate this case, it's all discolored now and kind of stupid but: NARY A SCRATCH. I don't know what my point is: have always kind of hated this case, but it worked for 2 years. Half-hearted win!

Woman, I freaking love you.

I spent the big bucks on a Lifeproof case because they were clearly designed for dummies and klutzes like me, and they are much slimmer than an otterbox. (disclaimer: phone is a couple-three years old and the case where the charger plugs in lost a rubber ring so bets are off if I drop it in the toilet) However I drop that bitch like 3x a day. No probs!

Sorry you shocked yourself, but thank you for writing about it. As always you raised an exhausted-momma-smile (and spirits) when few things would. And the force field 😹

Long time reader and in Baltimore! Check your email... My company does on demand mobile device repair!

I have a mini-iPad that I had repaired and I swear three days later the screen was cracked again. I figured it was me or one of the kids, because ADD and what? So I ordered me one of those sticky covers and a silicon kid-type protector, and it was good for about 4 months. Now it's kablooey, and the repair guy said it was because it was bent, so the glass isn't flush on the digitizer, so yeah... lady, you got yourself a brick.
But I love that tip about the Apple program, I may be making a trip to the Apple Store soon.

::still trying to determine if this whole post is, in fact, a metaphor::

I have an otterbox, and it's really not that big. Maybe there's more than one style? Anyway, I drop it a ton. I also have one of the expensive hard screen protectors. I crack that regularly, but the underlying screen is safe!

Otterbox. That is all.. If Apple and common sense had a baby.. oh and buy from Amazon, you're welcome

I have a LifeProof case on my 5s and I refuse to upgrade because I love that case so much.

Oh please, somebody send me a free phone

To cheer yourself up, look up "bad lip reading yoda seagulls" on YouTube. You will thank me. Or not. But you will laugh.

You can use iMessage on your iPad/apple laptop to text (well...iMessage) still. And you can call through them to if you're logged into your apple ID and have wifi (or have a data plan on your iPad). You can also call through google for free - open gmail and click on 'make a call' on the left. (I've done combinations of this before to survive the time between a dead phone and an upgrade). And apple is replacing some iPhone 6's for free for battery issues if they were produced during a certain time last year - maybe you qualify? Good luck!

Another Otterbox fan here...I drop my phones routinely, and it is my saving grace. My husband and I tried Life Proof,but it sounded like we were talking underwater (never mind trying to talk when one of us is driving through the Harbor Tunnel). I also have a super duper screen protector from Otterbox...and whenever it cracks they replace it for FREE!!!!! You wouldn't believe how many of those I have gone through...